The party must go on? Ivanka wishes Jared Kushner a happy 40th birthday and shares photo of him celebrating with their three kids – as Dems prepare to impeach her father over Capitol riot

Ivanka Trump set aside any concerns about her father’s potential impeachment on Sunday in order to celebrate her husband Jared Kushner’s 40th birthday at home with their three kids.

The 39-year-old First Daughter took to Instagram to mark the occasion, sharing a photo of Jared posing with their children, Arabella, nine, Joseph, seven, and Theodore, four, in front of a large birthday cake – her first Instagram post since a mob of MAGA protesters stormed the Capitol building on Wednesday.

In the image, which she captioned simply, ‘Happy 40th Birthday my love,’ Jared and his children are seen posing in a room that is filled with party decorations – alongside a table topped with an enormous multi-layer birthday cake and several other baked treats. 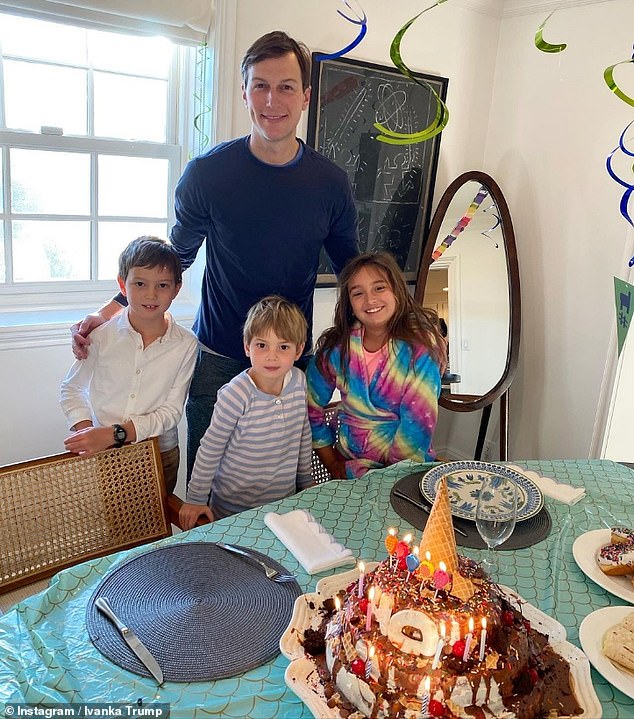 Keep calm and carry on? Ivanka Trump shared a birthday tribute to her husband Jared Kushner on Sunday – as Democrats prepared to impeach her father over violent Capitol riots

The post was met with mixed reactions, with some of Ivanka’s close friends and  family members sending their own well wishes to Jared in the comments section, including Don Jr’s partner Kimberly Guilfoyle, who wrote: ‘Happy birthday Jared!’

However others were quick to point out the poor timing of the celebratory post, with one commenter questioning why Ivanka has failed to speak out more about the MAGA mob who laid siege to the Capitol on Wednesday.

‘Why haven’t you said anything about what happened on January 6? You seem awfully quiet,’ the Instagram user wrote. 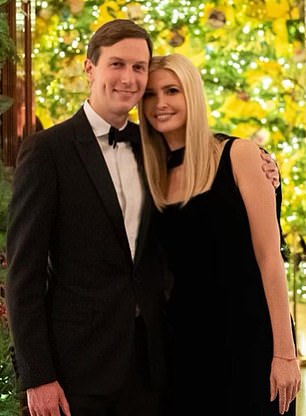 Controversy: Ivanka (seen with Jared last month), 39, faced backlash for the post, with many commenters questioning why she hasn’t spoken out more to condemn the violent MAGA mob that laid siege to the Capitol on Wednesday

‘Your actions are shameful!!!’ another commented.

‘An insurrection and birthday in one week. Your busy Ivanka,’ a third chimed in.

Ivanka’s birthday tribute to her husband comes just days after the senior White House adviser was slammed for referring to the MAGA mob as ‘American patriots’ in a since-deleted tweet.

‘[A]ny security breach or disrespect to our law enforcement is unacceptable,’ she tweeted to the mob. ‘The violence must stop immediately. Please be peaceful.’

Ivanka then went back on herself after deleting the post, responding to one user who asked if she was calling the mob ‘patriots’ that: ‘No. Peaceful protest is patriotic.’

President Trump is continuing to face furious fallout in the wake of the riot, with House Speaker Nancy Pelosi announcing on Sunday, just as Ivanka posted her birthday photo of Jared, that the Democrats will proceed with the impeachment of her father unless Mike Pence uses the 25th amendment to remove him from office.

Pelosi made the announcement in a letter to colleagues, framing it as an ultimatum to Pence to invoke the powers of the 25th Amendment to remove Trump from office.

If not, she said, the House would proceed with impeachment, which would make Trump the only President to be impeached twice.

‘In protecting our Constitution and our Democracy, we will act with urgency, because this President represents an imminent threat to both,’ she said, and added: ‘The horror of the ongoing assault on our democracy perpetrated by this President is intensified and so is the immediate need for action.’

Pelosi’s plan seeks a vote on Monday on a resolution calling on Pence and Cabinet officials to invoke the 25th Amendment. Under rules when the full House is not convened, any objection would reject the resolution.

Pelosi would then put the resolution before the full House on Tuesday.

If it were to pass, Pence and the Cabinet would have 24 hours to act before the House would move toward impeachment.

With impeachment planning intensifying, two Republican senators said they want Trump to resign immediately as efforts mounted to prevent Trump from ever again holding elective office in the wake of the riots at the Capitol, which left five dead, including a Capitol cop.

House Democrats are expected to introduce articles of impeachment on Monday. The strategy would be to condemn the President’s actions swiftly but delay an impeachment trial in the Senate for 100 days. That would allow President-elect Joe Biden to focus on other priorities as soon as he is inaugurated on January 20.

Pressure was mounting for Trump to leave office even before his term ended amid alarming concerns of more unrest ahead of the inauguration, after her was accused of whipping up the mob that stormed the Capitol.

Since deleting her tweet about the ‘American Patriots’ who took part in the riots, Ivanka has said little about the violence, sharing only one other tweet on January 7 – a quote from a statement made by her father, which read: ‘This moment calls for healing and reconciliation. We must revitalize the sacred bonds that bind us together as one national family.’

However all eyes were on the First Daughter on Thursday, when a moving truck from ‘College Hunks Hauling Junk’ was seen outside her Washington, D.C. home, prompting further speculation that the family is planning to move away following the end of her father’s presidency.

It was later revealed to DailyMail.com that the truck had in fact been picking up a donation for the Salvation Army, with the source explaining that they pick-up had been planned for some time.

Despite this, social media users were quick to mock the couple’s potential exit from the nation’s capital, with many calling out the name of the moving company in their posts.

The image was first shared to Twitter by Yahoo reporter Hunter Walker, who revealed that it was taken at 11am in the morning, while joking: ‘‘The question I have is which one of [Jared and Ivanka] wanted the “college hunks” to do the move.’

‘”Hauling Junk” seems appropriate,’ another person said. ‘They’d better not even THINK about heading back to NYC.’ 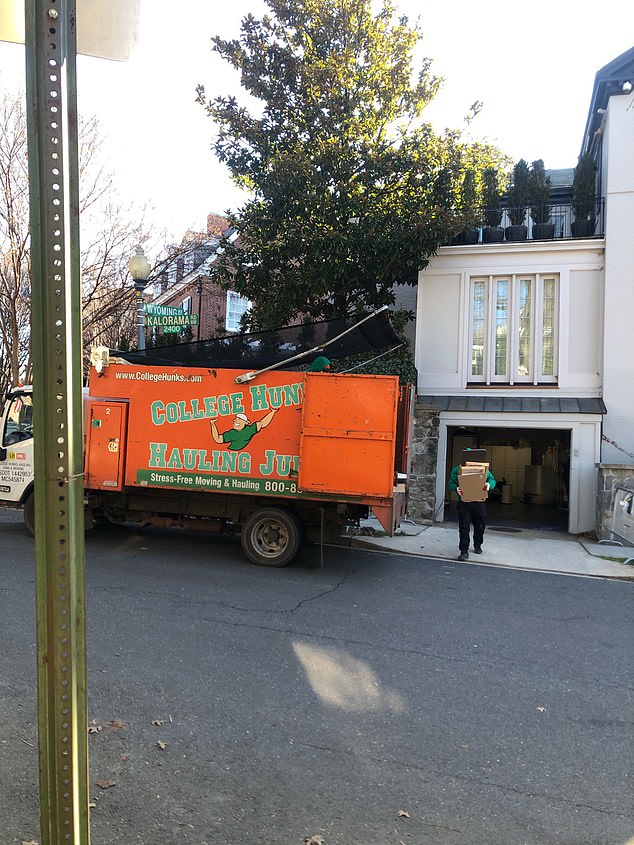 On the move? On Thursday, a moving truck from College Hunks Hauling Junk was seen outside Ivanka and Jared’s D.C. home, prompting speculation that they are planning to move 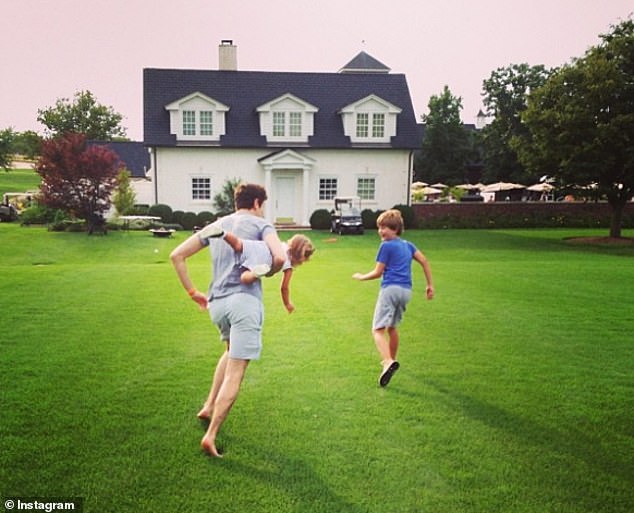 Chosen spot? Although it was later revealed that the truck had been picking up a Salvation Army donation, Javanka have submitted plans to extend their Bedminster cottage (pictured) 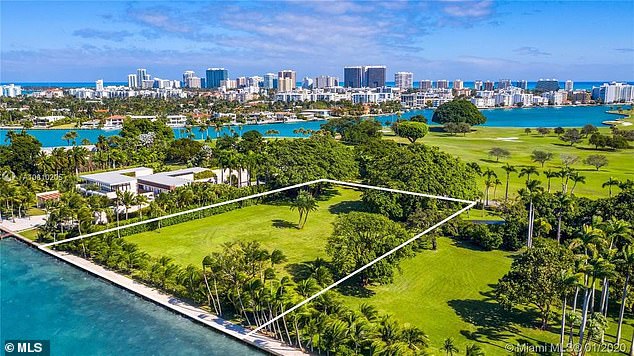 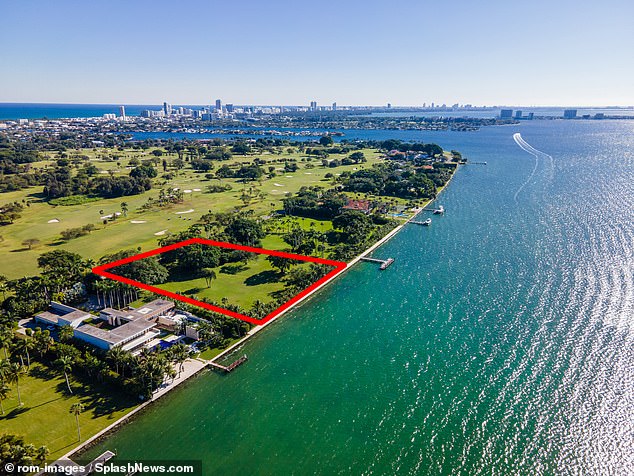 Exclusive: The island has only 34 homes, around 42 residents and its own private 13-person police force

It’s unclear if the couple are officially moving out of D.C. just yet, with less than two weeks until Biden’s inauguration.

College Hunks Hauling Junk also offers services to collect and discard of unwanted items, as well as removal services, according to its website.

The couple, who are both senior advisers to President Trump, moved into the stately home in Washington’s esteemed Kalorama neighborhood in 2017, shortly after Ivanka’s father was sworn into office.

Valued at $5 million, the couple have reportedly been renting the home for around $15,000 per month ever since.

However, after Biden’s election win, many speculated that the couple was preparing to make a swift exit from D.C. – although it remains unclear where exactly they will end up.

Initial reports after the election was called suggested the couple had been eyeing a triumphant return to the socialite scene in New York City.

The couple do own a $4.1 million apartment along Manhattan’s Park Avenue, but Ivanka’s bestfriend Georgina Bloomberg – daughter of Mike Bloomberg – said any return could prove ‘socially difficult for Javanka’, following her father’s tumultuous four years in office.

Within weeks, documents were uncovered that seemed to suggest the couple were instead eyeing up the chance of taking up permanent residency in the Garden State.

The couple had reportedly been preparing plans in late November to present to local officials to substantially build on their ‘cottage’ which is located on the grounds of the Trump National Golf Club, in Bedminster.

Their plans reportedly call for an expanded master bedroom, bath and dressing room, two new bedrooms, a study, and a ground floor veranda – homely additions that hint that the property could be set to become their permanent abode.

They were also later reported to have purchased a staggering $31.8 million plot of land along Miami’s ‘Billionaire Bunker’.

The plot in question is nestled in Indian Creek, which is a highly exclusive neighborhood that boasts beautiful waterfront views and a great deal of privacy.

The island has only 34 homes, around 42 residents and its own private 13-person police force.

The local authorities run patrols around the island on land and an around-the-clock armed marine patrol supervises the waters surrounding the island.

Each home on Indian Creek is built around the perimeter of the island to ensure that all residents have a waterfront view, while the middle is occupied with the luxurious Indian Creek Country Club and a 18-hole golf course.