Fascinating choice of a hat! Ivanka Trump adds a VERY distinctive cap to her all-white ensemble for a trip to Westminster Abbey – after first wearing the conservative look to Buckingham Palace

The first daughter, 37, arrived at the church wearing a white Philip Treacy fascinator that featured an oblong shape and was positioned at the top of her forehead, giving it the appearance of almost sliding off her head.

The hat, which included a large white bow on the right side that dipped over her eye, matched the pleated white skirt and peplum jacket that Ivanka was dressed in for her first day attending official events in London this week. 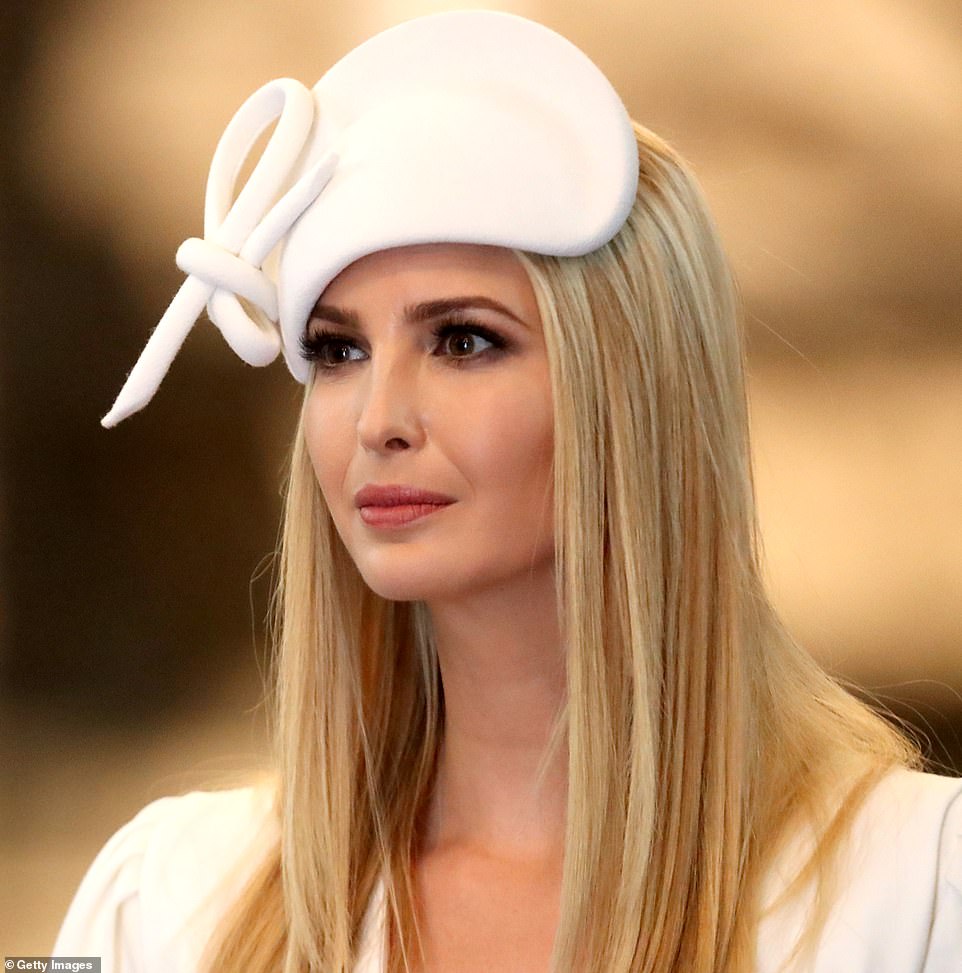 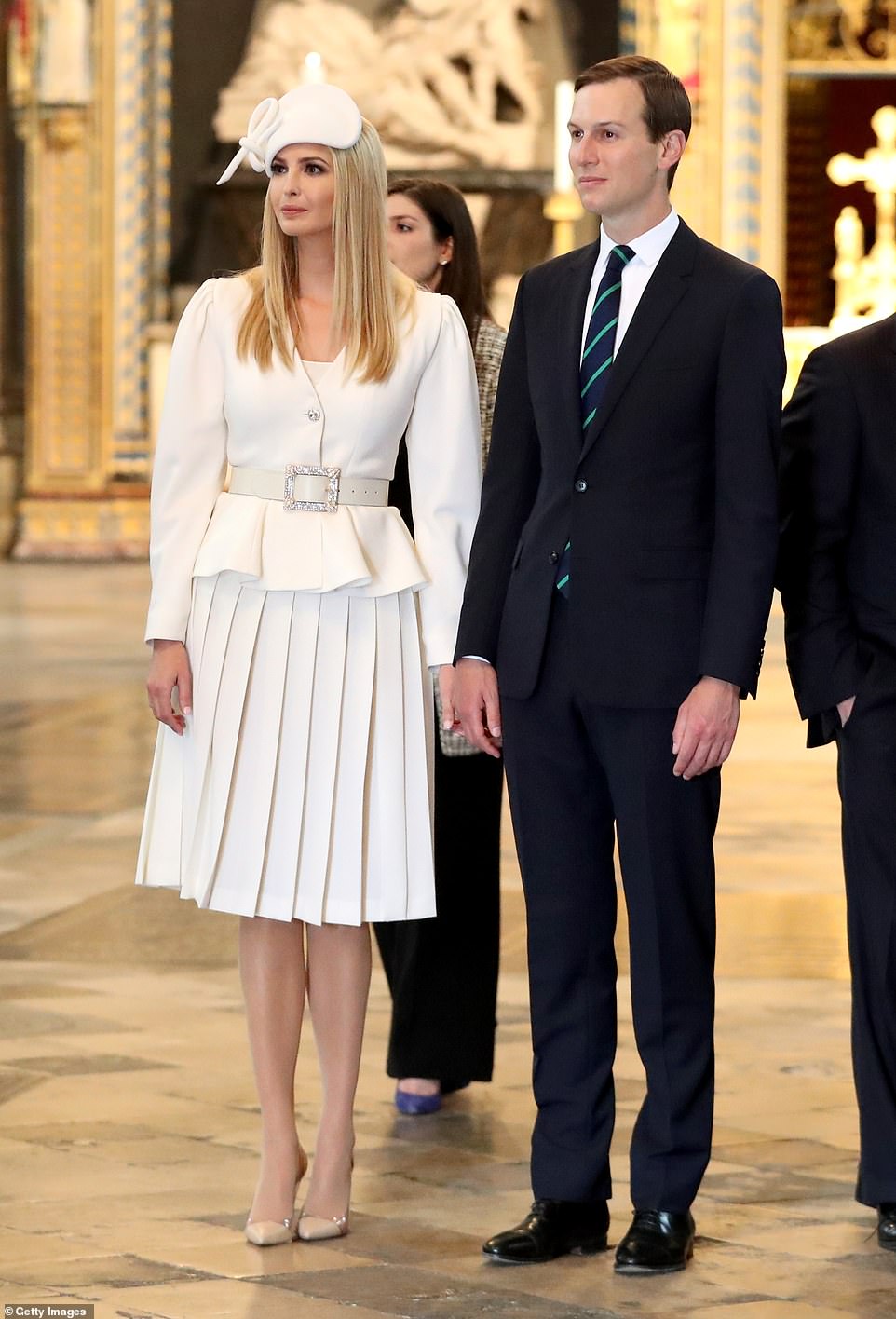 She was pictured during the visit alongside her husband, Jared Kushner, who wore a black suit and navy-and-green stripped tie for the event 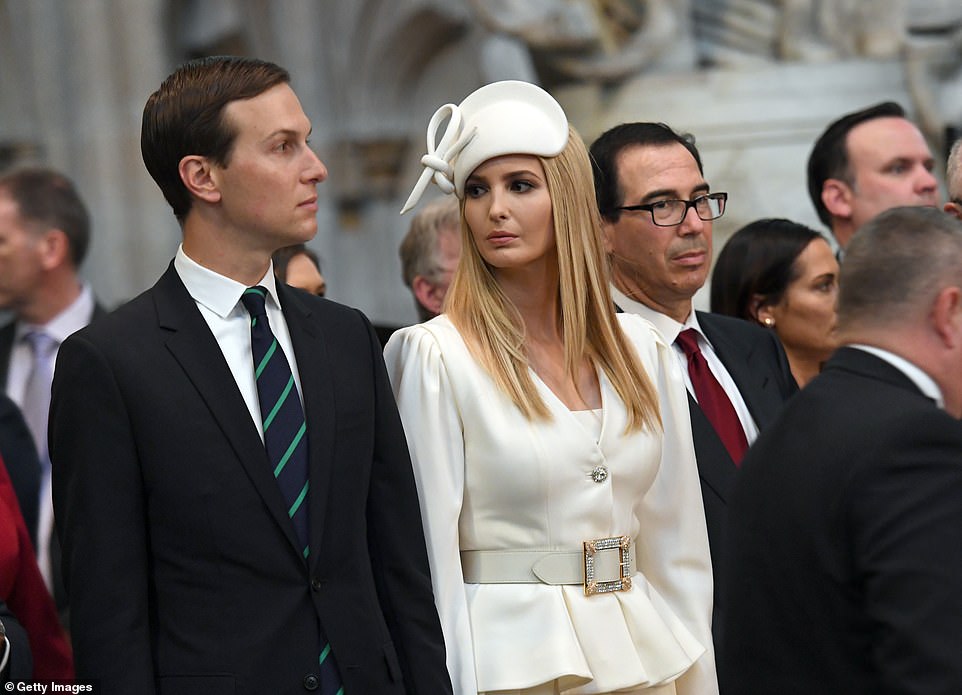 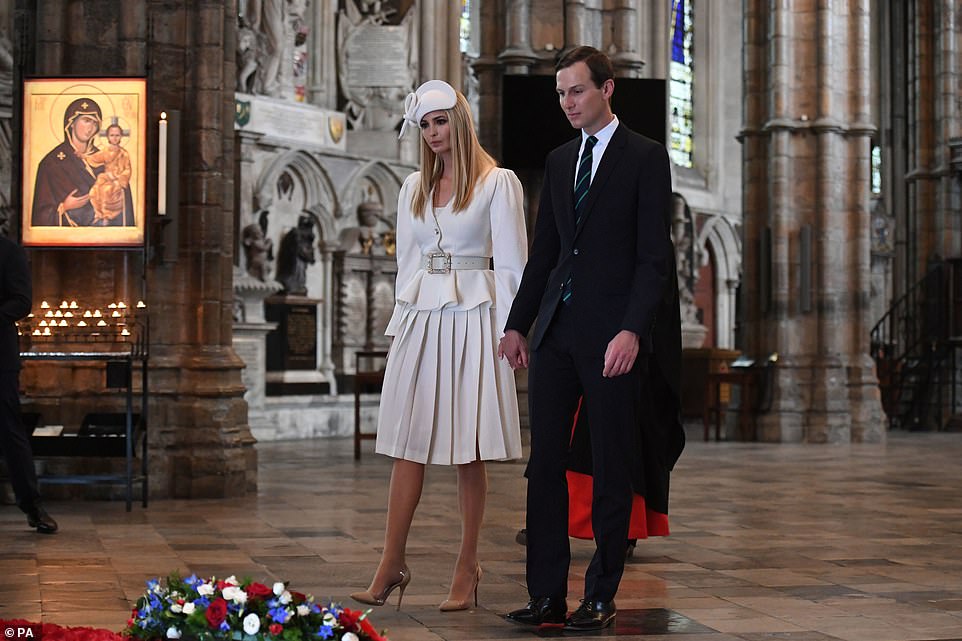 A fascinator is typically worn by Christian women in Europe when attending formal gatherings or visiting a church, but they are uncommon in the US — so it was a new but necessary look for Ivanka as she accompanied the president, his wife Melania Trump, and her own husband Jared Kushner to Westminster Abbey to lay a wreath at the Grave of the Unknown Warrior.

Bobby pins and clips were likely necessary for the first daughter to keep the white fascinator from sliding off her head, particularly as it was positioned over most of her forehead. She wore the hat with an all-white ensemble by Italian-born London-based designer Alessandra Rich, which included a peplum top cinched in at the waist by a chunky belt as well as a pleated skirt.

Ivanka shared a photo of her outfit on Twitter during the visit, writing: ‘Touring Westminster Abbey after @POTUS and @FLOTUS laid a wreath at the Grave of the Unknown Warrior. #USStateVisit.

Included in the picture was husband Jared Kushner, 38, who wore a black suit and navy-and-green striped tie for the occasion.

The couple stayed together, at some points linked arm in arm, throughout their visit through Westminster Abbey.

As a pair, they viewed the Grave of the Unknown Warrior, which holds an unidentified British soldier who was killed during World War I.

They also appeared to speak with clergy members at the church during the official tour.

Before visiting Westminster Abbey on Monday, Ivanka expressed that she was ‘looking forward’ to joining her father Donald and his wife Melania later on Monday as they touched down in London for an official state visit.

She wrote on Twitter: ‘Today, Her Majesty The Queen will welcome @POTUS and @FLOTUS for a State Visit to the United Kingdom. I am looking forward to joining the US delegation for this commemorative visit,’ followed by a British and American flag emoji.

Earlier in the morning, she was first spotted peering outside a window in Buckingham Palace at the large crowd that had gathered outside.

She was not wearing the fascinator at the time but was wearing her Alessandra Rich ensemble.

While at Buckingham Palace this morning, she had a chance to view American items in the Royal collection alongside her husband and her father.

The president’s eldest daughter arrived in the UK yesterday and managed to squeeze in a trip to the Victoria and Albert Museum in Kensington.

On Sunday she shared a snap outside the V&A museum, posing beside a friend wearing a yellow floral dress from New York sister designers duo Ai Ly and Wayne Lee — also known as Les Reverie.

She paired the pure silk-crepe frock that falls to a flattering midi length with blue high heels as she stepped out to see the Mary Quant exhibit of over 200 pieces of clothing and accessories from the British designer. 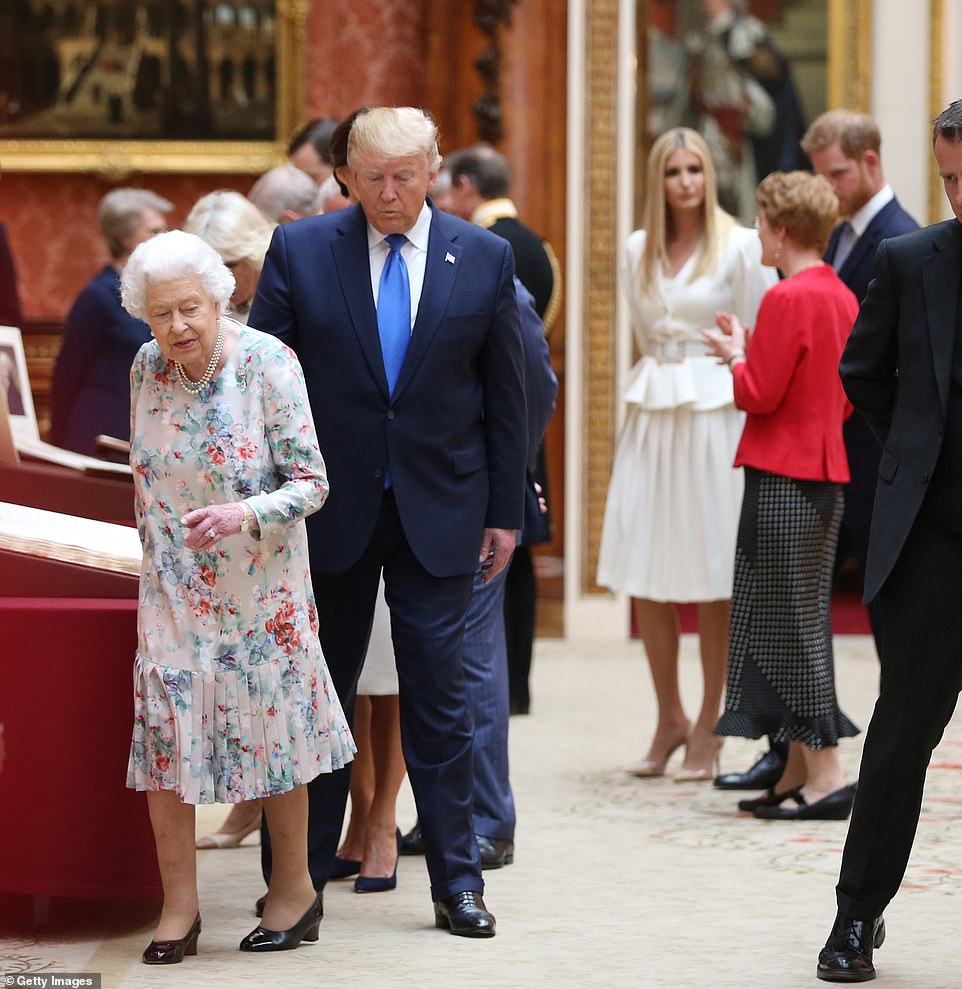 While at Buckingham Palace this morning, she had a chance to view American items in the Royal collection She, her father, and her step-mother Melania were all there and were shown around by The Queen and Prince Harry Prince Andrew, Duke of York showed Ivanka some pieces in the collection at the palace 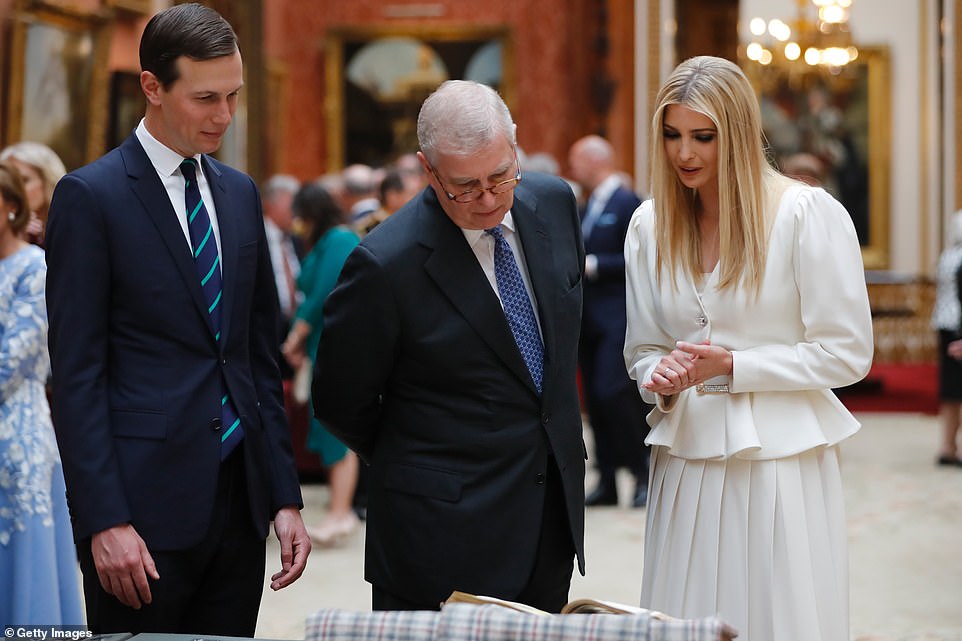 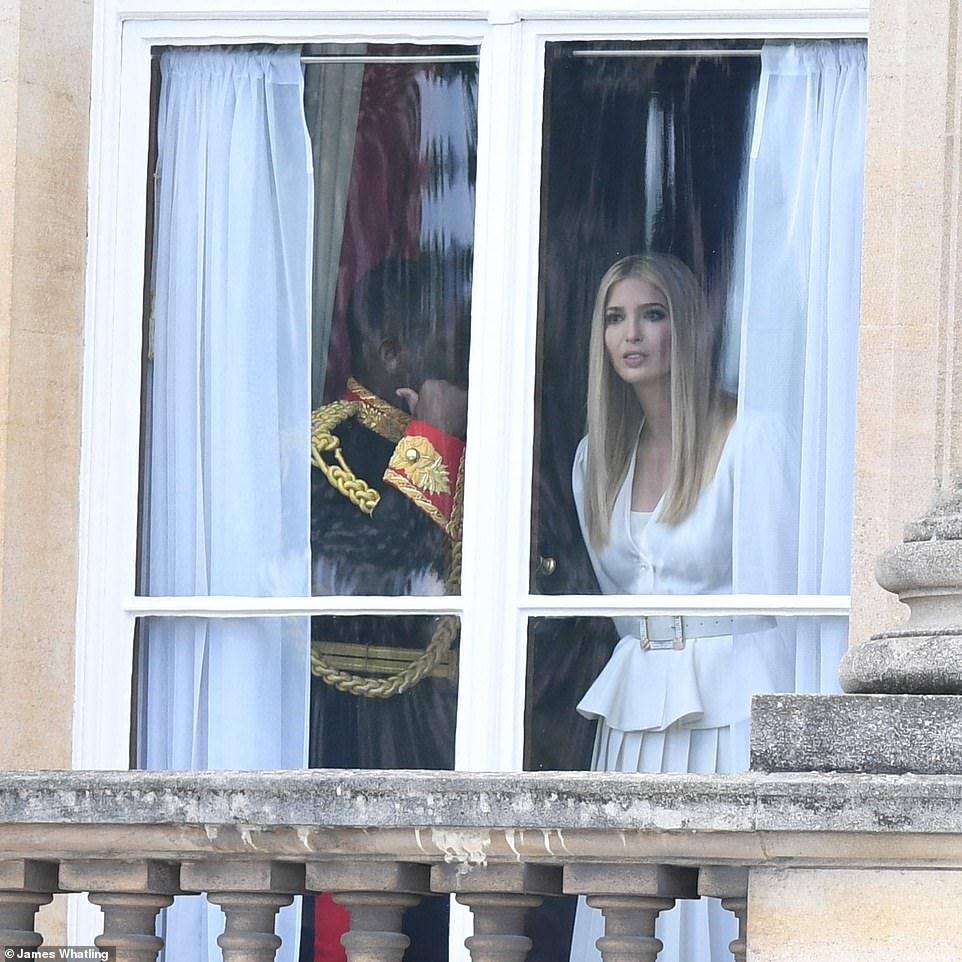 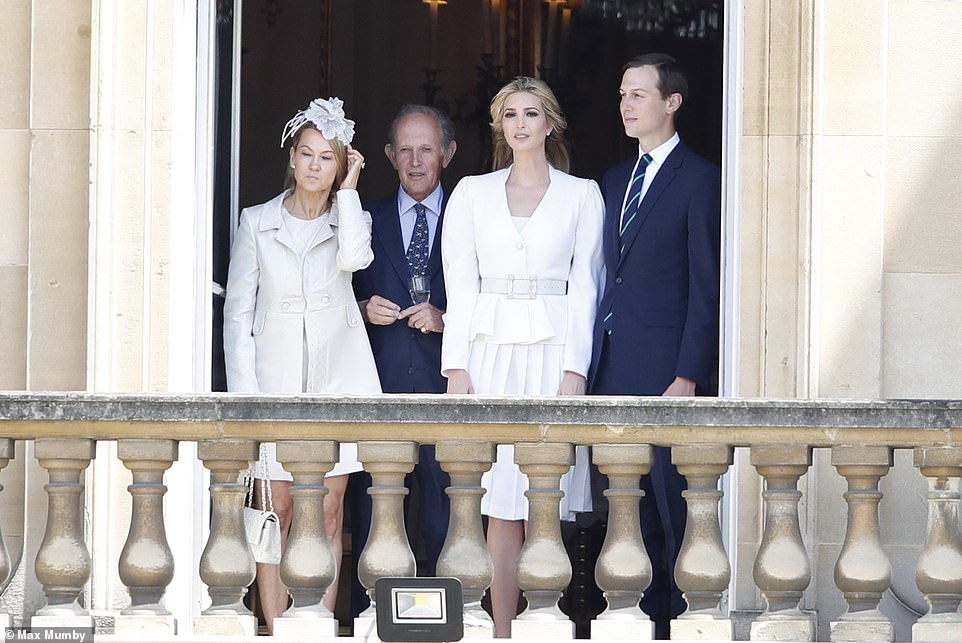 As her father landed, Ivanka emerged onto the balcony beside her husband Jared (right) 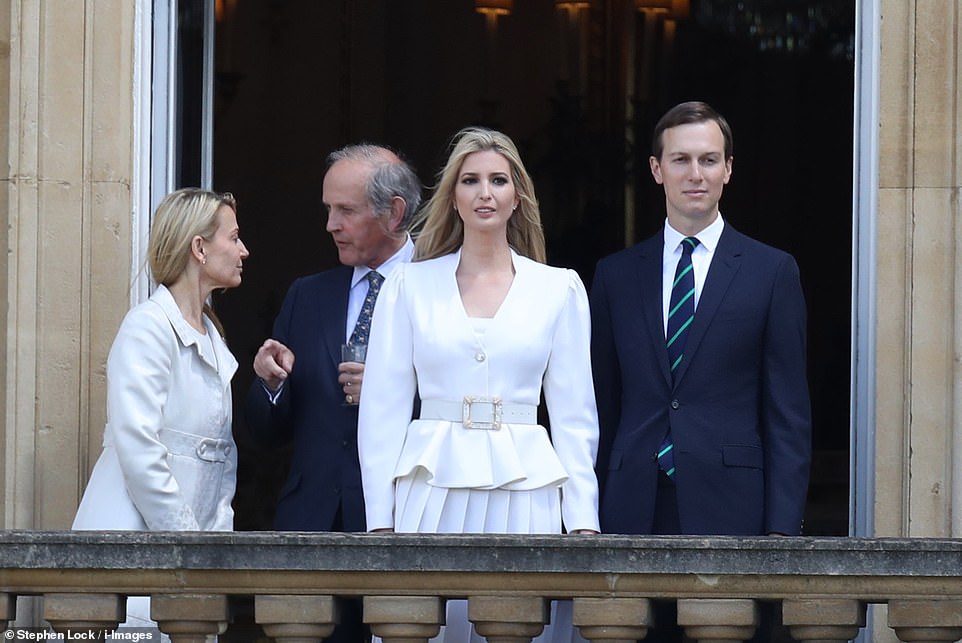 She wore the same all-white ensemble that she was in while visiting Westminster Abbey. But the fascinator was not on her head at the time 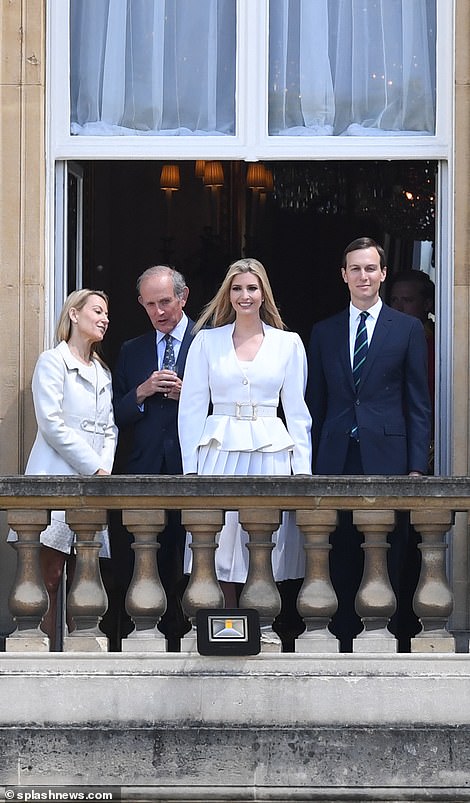 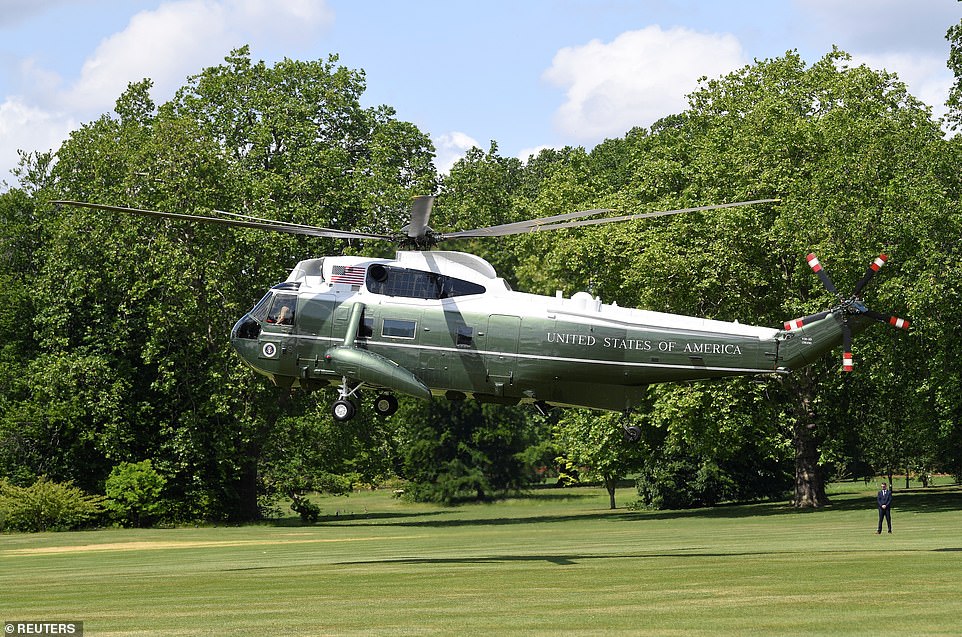 Earlier on Monday morning President Trump’s jumbo jet landed at Stansted airport — and he wasted no time in making yet another dig at London Mayor Sadiq Khan.

He tweeted: ‘Sadiq Khan, who by all accounts has done a terrible job as Mayor of London, has been foolishly “nasty” to the visiting President of the United States, by far the most important ally of the United Kingdom. He is a stone cold loser who should focus on crime in London, not me.’

For the first day of the three-day visit, First Lady Melania, 49, plumped for a classic knee-length pencil skirt and matching blazer as she stepped off Air Force One.

In an apparent nod to the upcoming D-Day anniversary, Melania paired the suit with a £650 ($820) Burberry blouse printed with military medals.

President Trump reached for his wife’s hand as they crossed the runway and made their way to the waiting Marine One helicopter. 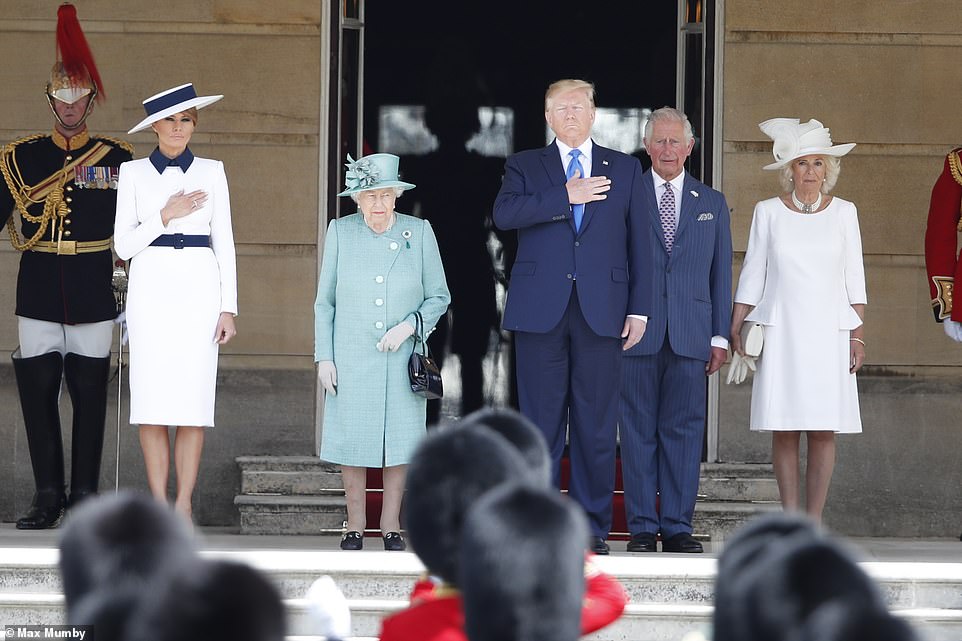 Trump and Melania were greeted at the Palace by the Queen, Prince Charles and the Duchess of Cornwall 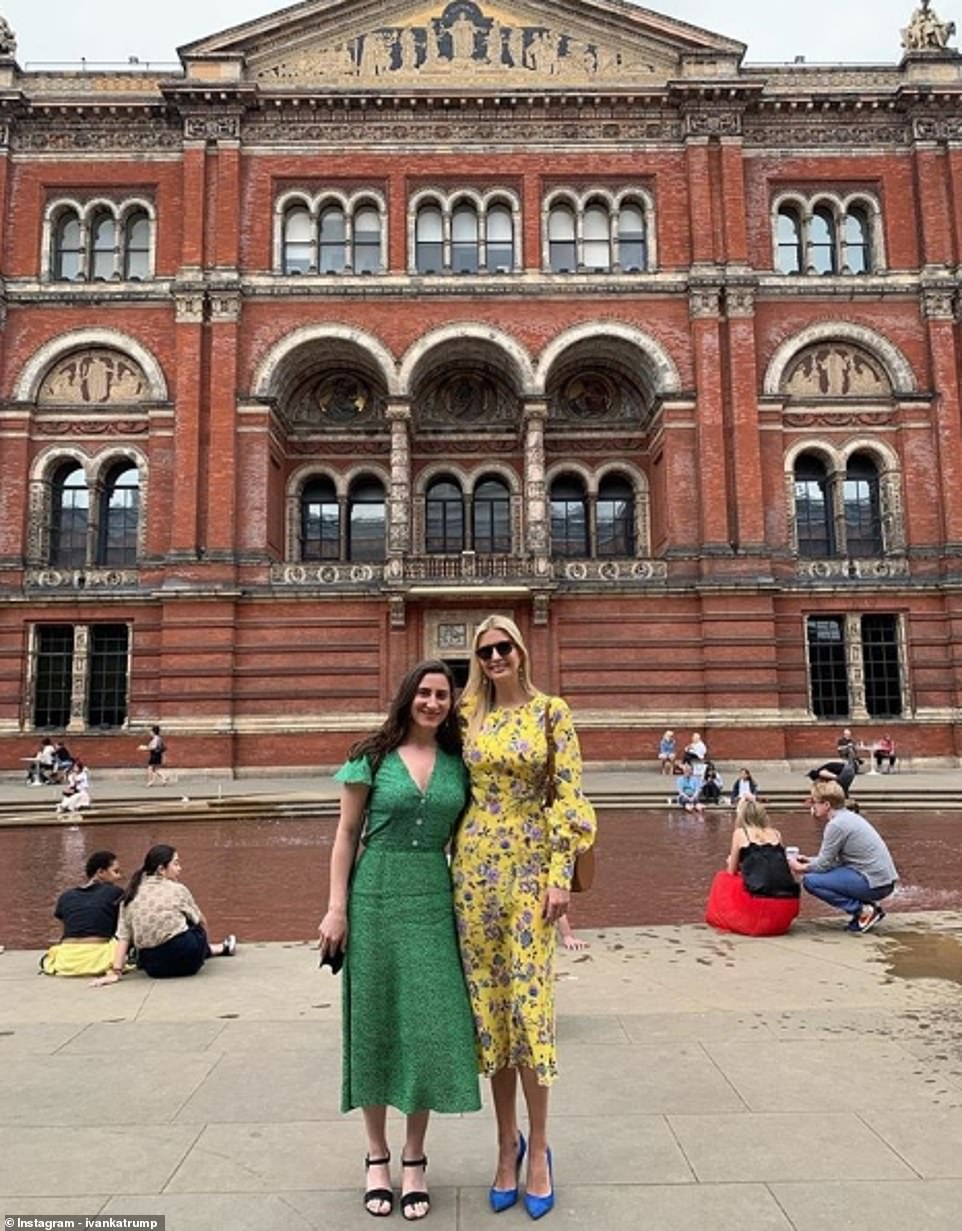 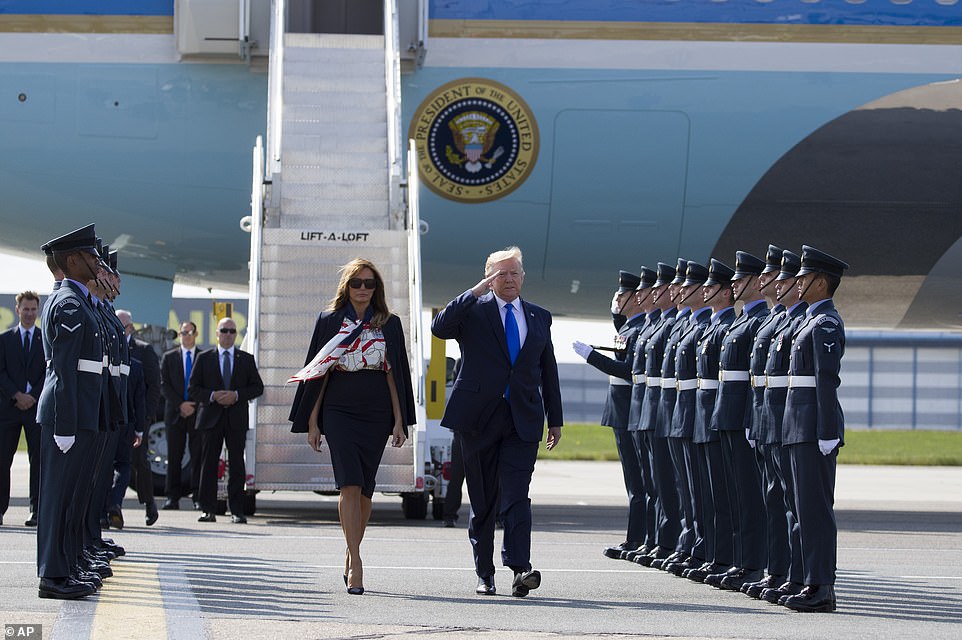 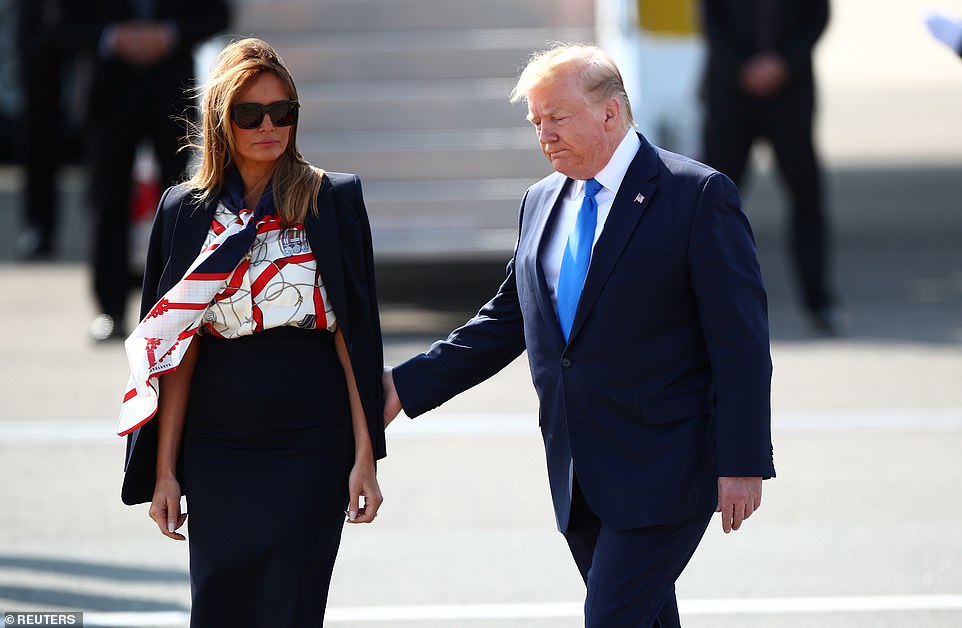 While the president and first lady are expected to be met by protests in central London, there was no sign of disruption on their arrival in Stansted Airport, which is roughly an hour’s drive from the capital.

The first lady found time for an outfit change on the overnight flight, after leaving the Andrews Air Force Base, in Maryland, in a £3,480 ($4,400) Gucci shirt dress.

The designer frock was printed with a graphic illustration of the London skyline – complete with depictions of Tower Bridge and the Houses of Parliament.

The next three days will be a whirlwind for both President Trump and Melania, as they will dine with the royal family and commemorate the 75th anniversary of D-Day.

Monday first involved a lunch at Buckingham Palace with the Queen and Duke of Sussex. The Duchess of Sussex did not attend as she is on maternity leave. The pair then went to Westminster Abbey before later attending an afternoon tea hosted by Prince Charles and the Duchess of Cornwall at Clarence House.

On Monday evening the couple will be guests of honor at a state banquet hosted by the Queen at Buckingham Palace, which will be attended by senior royals including the Duke and Duchess of Cambridge. 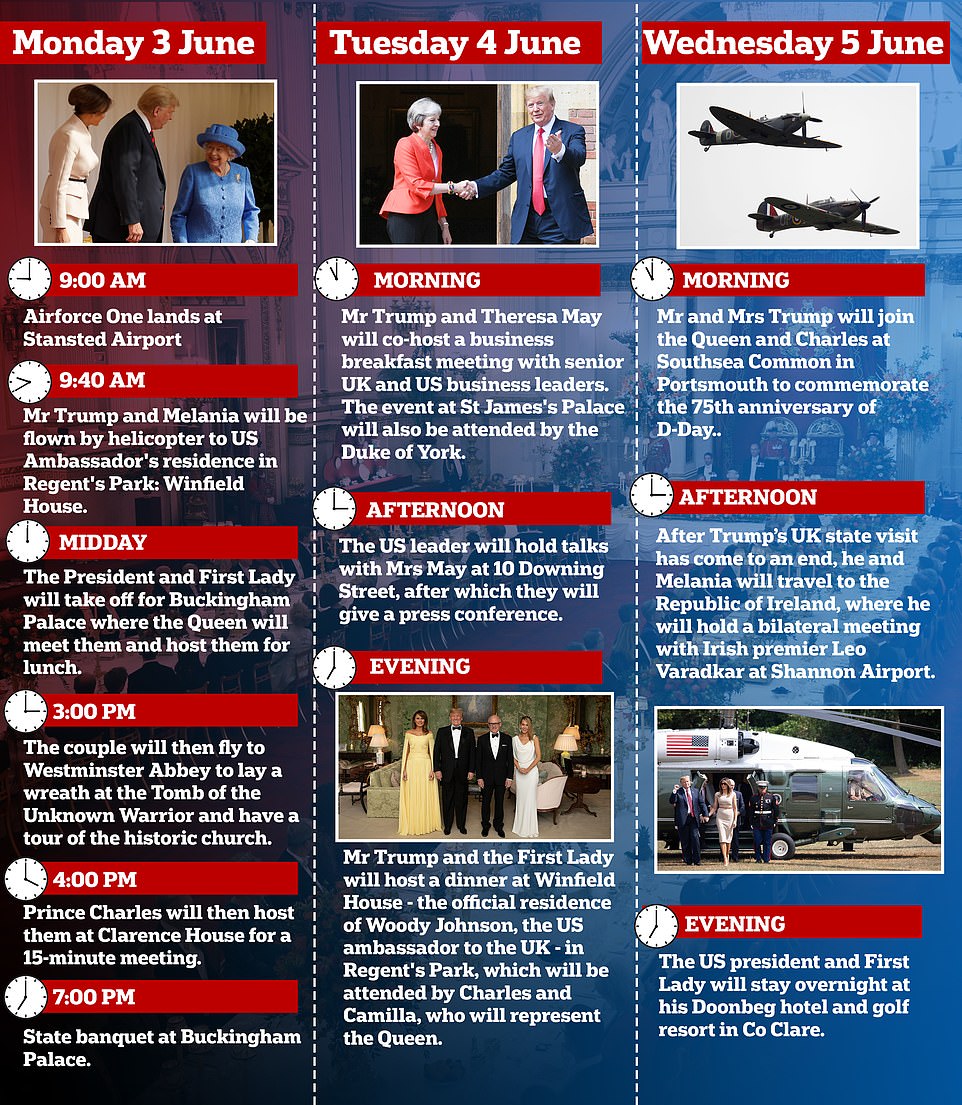 Full details of Trump’s state visit to Britain have now been revealed, including all the royals he will meet over the three days