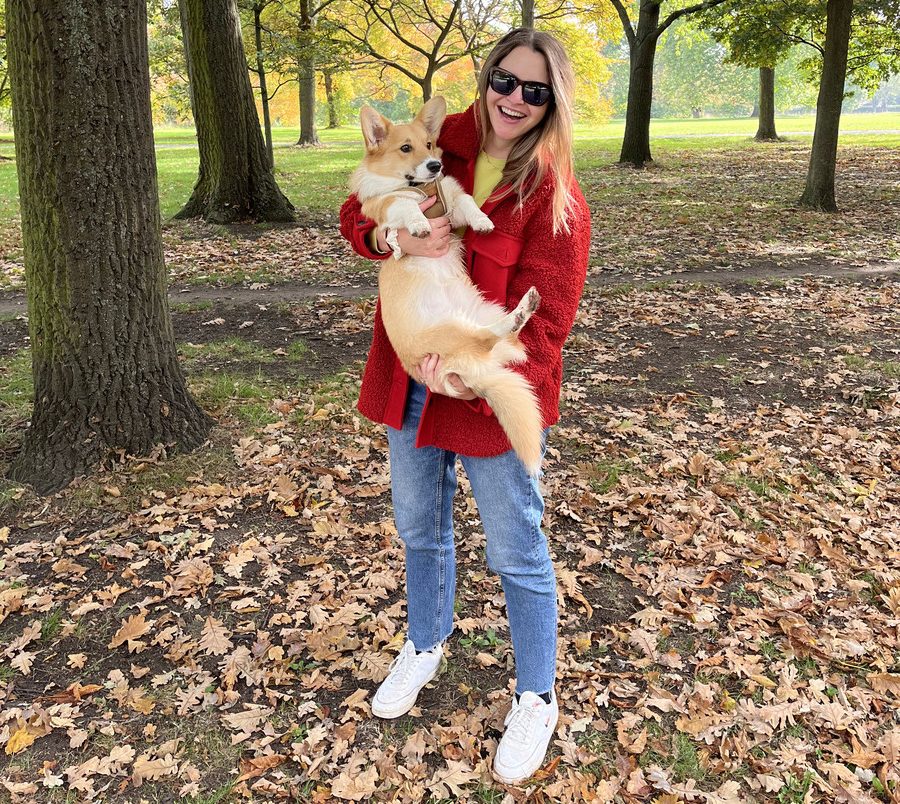 My husband and I were walking our dog when we got the phone call.

The October morning had started out pleasantly enough. In an attempt to distract ourselves from the looming news, we had taken Pepperoni, our eight-month-old Corgi, to our favourite coffee shop and then on to her favourite park.

The sun was shining as we watched her chase a French bulldog across the sloping grass.

Paul reached over and grabbed my hand. ‘You know whatever happens today, we’re going to be OK, right?’ I nodded and offered him a smile, hoping I could convince myself.

A few minutes later, my phone rang. I was wearing sunglasses, but they did little to mask the tears that started to fall down my cheeks as I listened to the news from our fertility clinic. Paul needed no explanation when I hung up.

The results of our pregnancy test were negative, and I was not OK.

You might think I’d have developed a thicker skin after navigating the IVF process for nearly four years. But instead, each new disappointment hurts more than the last.

Since the beginning of 2019, I’ve had five egg retrievals (each requiring me to take around three weeks of drugs followed by an operation under light anaesthesia to collect the eggs) and six frozen embryo transfers (I had around three weeks of drugs followed by the implantation, which is usually done while you’re awake). Four of those transfers failed and the two successful pregnancies both ended in miscarriages.

I also had two additional medicated cycles that didn’t result in transfers. Once, the embryo didn’t survive thawing; and once we messed up the drug schedule and had to start over.

It was the Unlucky 13. Thirteen separate rounds of starting a new routine of injections, pills, patches and pessaries on the first day of my period.

Thirteen rounds of being poked, prodded and pricked.

Thirteen rounds of forcing pleasantries with well-meaning doctors with my legs wide open on a table. (Maybe it’s just me, but I prefer efficiency over lingering chattiness from medical professionals jabbing my insides with an ultrasound probe.)

Thirteen rounds of mood swings, acute depression and an overwhelming sense of failure and loss.

The weight of the past four years was heavy on my shoulders that day in the park. We had decided, going into that sixth transfer, that it would likely be our last – so the stakes felt higher than ever.

It’s not that we were ready to give up on our dream of starting a family. It’s just that the journey had cost us more than we had ever imagined – financially, emotionally and physically.

When we first started getting serious about our relationship in 2012, Paul and I talked about having children the way most people do. We assumed it was a choice that was ours to make.

We naively thought that the hardest part would be deciding if and when we were both ready. The rest would just happen naturally.

A few years later we learned that, due to an underlying medical issue, IVF would be our best option.

Still, we were optimistic and assumed we’d get pregnant quickly. We even put off starting for a few more years so I could focus on my career in media. I felt like we had all the time in the world to become parents.

Our condition meant that we qualified for three egg retrievals and their subsequent embryo transfers to be covered by the NHS. That was more than many people got, and I assumed it would be more than enough to see us through to parenthood.

We smashed through our allotted ‘free’ treatments and eventually started paying out of pocket.

To date, we’ve paid more than £35,000. I feel sick when I see the number written out. As the costs escalated, we often avoided adding them up, too afraid to face the total.

Of course, I realise how privileged we are to have been able to make those payments. Still, it’s hard to feel fortunate with hindsight, knowing that all that money was for nothing.

But it wasn’t just our bank account that took a hit – I never could have imagined the impact IVF would have on my mental health.

The drugs I was taking impacted my moods and triggered episodes of anxiety and depression. Plus, the constant rollercoaster of hope followed by bitter disappointment was enough to make anyone feel low – drugs or no drugs.

During the third year of my fertility journey I was made redundant from my job: the dream job that I had chosen to prioritise rather than start IVF in my early 30s.

I was devastated by the loss. I had spent years trying to hide my doctor’s appointments, making up excuses for why I needed time off following my miscarriage and silently crying in the office toilets after each bit of a bad news. I had seen friends and colleagues hit career speed bumps when their superiors found out they were on the ‘motherhood track,’ and I was desperate to avoid a similar fate.

But there was a tiny part of me that felt a twinge of relief after I found out I was soon-to-be unemployed. I figured the journey might be just slightly more bearable without the daily stress of a demanding job. However, I did not account for the fact that trying to find a new full-time role and adjusting to my missing salary would add new layers of stress.

So here we are. Four years and £35k later, and I’m exactly where I started.

On days when I’m feeling particularly sad, I say that sentence aloud and wallow in the despair of it all. It’s easy to feel hopeless after such a traumatising journey.

Thankfully, Paul is always there to interject. ‘Hey now, that’s not true,’ he says gently. ‘We do have a family. You, me and Pepperoni. And I think the three of us make a pretty good team.’

Deep down, I know he’s right – and I’m getting increasingly comfortable with the thought that that could be enough.

For now, I’m enjoying this new injection-free phase where we can have a glass of wine and discuss topics other than oestrogen levels and diminishing fertility rates. I’m focusing on my mental and physical health, my career, my relationships and my adorable puppy.

I’m still very hopeful that parenthood is in our future, one way or another. But I’m also giving myself permission to take a much-needed break.

Ali shares advice on how to make it through IVF without losing yourself on her Substack newsletter, Maybe Someday.