The 31st French Film Festival takes place around the country next month. Jake Wilson took a look at what's screening and gave us his top five films not to miss.

DEERSKIN
The latest absurdist provocation from Quentin Dupieux (Rubber) features Jean Dujardin (The Artist) as the proud owner of a very special jacket and Adele Haenel (Portrait of a Lady on Fire) as his no less eccentric accomplice. 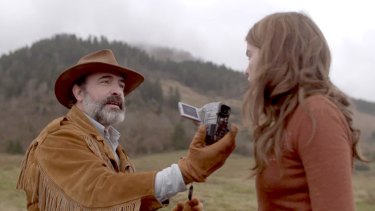 DONKEY SKIN
Like much of the work of the late, great Jacques Demy (The Umbrellas of Cherbourg) this musical fairy tale from 1970 is less innocent than it looks. A young Catherine Deneuve stars as a princess keen to avoid a fate worse than death.

FAREWELL TO THE NIGHT
Deneuve reunites with frequent collaborator Andre Techine (Being 17) for this drama about a horse trainer whose grandson (Kacey Mottet Klein) has terrorist ties. The theme may be topical, but Techine's interest in the mystery of personality remains constant.

OH, MERCY!
Set in Roubaix, the hometown of director Arnaud Desplechin (Kings and Queen), this cop thriller could be mistaken for a straightforwardly gritty genre movie. But as usual for Desplechin, it soon strikes out in several bold directions at once.

ZOMBI CHILD
The latest from the audacious Bertrand Bonello (Nocturama) is not your usual kind of zombie movie but it brings us full circle to the origin of the whole mythology, via the story of a Haitian teenager (Wislanda Louimat) sent to study in Paris.

For screening times and locations go to affrenchfilmfestival.org