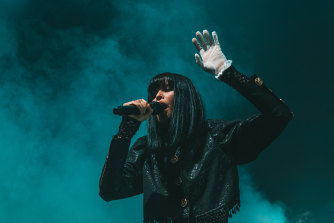 The Jezebels play Prisoner at the Forum.Credit:Rick Clifford

Have you ever heard Queen’s Brian May play guitar live? There’s so much more to his signature sound than can be squeezed into a recording: you just have to be there to hear the full-frequency three-dimensionality of it bouncing around a venue with all its overtones and reflections.

Hayley Mary, vocalist of the Jezabels, has that same aural otherworldliness, that ability to completely control not only the note itself but also the way it carries and bounces around the room. On the final night of the band’s latest tour, in celebration of their 2011 album Prisoner, the entire Forum became an extension of Mary’s voice as the Sydney indie rock quartet took us back in time to the summer when the album seemed happily inescapable.

The band’s other secret weapon is their skill for musical arrangement, which gives guitarist Sam Lockwood space to roam in a The Edge-meets-Robert-Smith kind of way, equally textural and rhythmic. Heather Shannon’s inventive keyboard playing often seemed to invert the theme of Lockwood’s guitar, building up layers of orchestration that fool you into thinking you’re hearing more instruments than you are (though the quartet is augmented with a bass player). Drummer Nik Kaloper tied it all together with his sturdy, in-the-pocket playing. 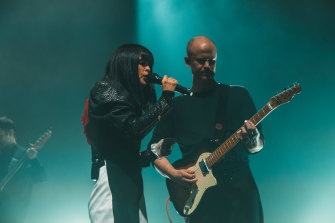 Room-filling guitar from the Jezebels.Credit:Rick Clifford

The setlist was kept strictly to The Early Stuff: that is to say, the entirety of Prisoner, then material from the independent EPs of 2009 and 2010. This kind of anniversary show is always welcome, actual anniversary or not. Maybe we don’t need to wait until a nice satisfying number like a decade or a quarter of a century to celebrate a piece of art. Maybe it’s OK to just celebrate an album not because a milestone has passed but because it’s simply worthy of revisiting.