"Ms. Heard demeaned that young man, to the point where he burst into tears and walked away," claimed Depp.

Johnny Depp’s time on the stand continued Monday, with a re-direct from his own legal team following cross-examination by Amber Heard’s. And his text messages to actor Paul Bettany once again got the spotlight.

Last week, 2013 texts between the two were read aloud in court in which Depp said, “Let’s drown her before we burn her!!! will f— her burnt corpse afterward to make sure she’s dead.”

On Monday, Depp said the two bonded over their “dry” sense of humor and said “none of it was intended to be real.” While he said he was “ashamed” the language used has been “spread on the world like peanut butter,” Depp said the quotes in question were “directly from ‘Monty Python’ and the sketch about burning witches and then drowning the witches.”

He added, “This is a film we’d all watched when we were 10 and it’s just irreverent and abstract humor. That’s what we were referring to in those texts.”

Depp also claimed Heard “despised” Bettany, saying his ex-wife was basically jealous of their friendship and characterizing Paul and Amber’s relationship as “abominable.” 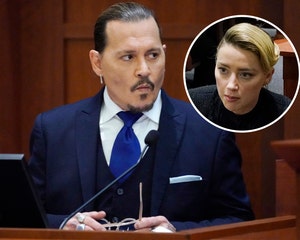 “We had become such close friends and for her he was a threat and would take me away from her, in regard to, if Paul Bettany was getting the attention from me, that was a show-stopper,” he began. “It would cause all kinds of unpleasantries,” he added, before going into an alleged incident that went down at Depp’s private island in the Bahamas.

“We were on the island with Mr. Bettany, his wife [actress Jennifer Connelly] and his four children, Ms. Heard and Mr. Bettany got into some debate over lunch and I just remember that whenever Mr. Bettany tried to make a point, she would talk over him and then it started to get quite rude. She got mean and she got loud,” he continued.

“And then, I believe it was his 18-year-old boy … he entered the conversation, because it was something to do with what he studied in school and knew a lot about it and voiced his opinion and Ms. Heard demeaned that young man, to the point where he burst into tears and walked away,” Depp then claimed. “It was at that point I had spoken to Ms. Heard and said, ‘That’s just unacceptable, you have no right to demean that boy. You cannot always be right. You should try being wrong sometimes because you might learn something.'”

Depp claimed he then told Heard “it would be best that she leave the island.”

TooFab has reached out to Bettany’s rep for comment. The actor is also expected to take the stand during the ongoing trial.

In an interview with the The Times in February 2022, Bettany said that he “didn’t know Johnny when he was married to” Heard.

“I knew him before. But we hadn’t spoken for years,” he added, saying that, “During the marriage I didn’t know them. So I wasn’t around for any of that. We live in a world without context.” Depp and Heard were married in 2015, the texts in question are from 2013.

Depp is seeking $50 million in damages after Heard claimed she was a survivor of domestic abuse in an op-ed in the Washington Post in 2018. While she didn’t name Depp in the piece, his lawyers argue it was implied to be about him and negatively affected his career. She countersued Depp for $100 million.

The actor has already lost an earlier lawsuit he took in the UK over the same article that appeared in The Sun.

The trial is expected to last six weeks. See more coverage of the ongoing trial here.