Did he drop it yet? The question has been everything for months now. Over numerous riveting, barmy, hugely theatrical and ultimately anticlimactic listening events at American sports stadia, Kanye West has managed to redefine the whole idea of The Album: not a solid, immutable unit of musical expression, but an evolving act of performance art.

Last week’s livestream event raised the what-the-flip bar with cameos from professed Satanist and alleged sex offender Marilyn Manson and cancelled homophobe rapper Da Baby, then peaked with Kim Kardashian returning in her wedding dress to re-enact their marriage (she left him, you’ll surely know, back in February). Funny. Oh, did he drop it yet? 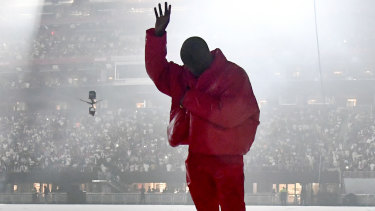 The answer, despite the odds, is yes. The artist, who has filed documents to formally change his name to Ye, finally let Donda, his 10th album, stream forth unto the waiting world on Sunday night (AEST).

Finally? Well, he’s been known to fiddle with his stuff even after releasing it, and this stuff isn’t pressed to vinyl yet – if that’s even a thing in this maddening new world where delivery plays second fiddle to anticipation: the only marketing tool that can’t be upstaged by next week’s distraction.

With 27 tracks running for one hour and 48 minutes, Donda can only be a mixed blessing. Named for his sainted mother, who echoes from the grave to lecture us about “what [her son] has meant to a generation”, it’s an orgiastic self-indulgence roiling in spiritual turmoil and bustling with big-name hip-hop cameos.

The opening feels portentous. Donda Chant is Syleena Johnson repeating that sacred name for almost a minute, stressed and stretched in Steve Reich-fashion until it means nothing and everything. The minimalist keynote is apt musically, but what follows is more about overload than understatement.

From reverie to purgatory, we’re jolted into Jail by staccato bass and a weirdly infectious, buzzing guitar loop. West surrenders to the judgment of Jay-Z who raps about his estranged friend’s dalliances with Trumpism and other follies. Dude, it’s like Alice Cooper Goes to Hell. Our antihero’s gonna swing for this…

Except he never does. Redemption is already a given in the Gregorian undertow of God Breathed on This. In a dozen more titles to follow – Praise God, Jesus Lord, Keep My Spirit Alive, Lord I Need You, etc – West pins his many trials on the famously mysterious ways of his personal saviour.

Said trials are as vague as rhyming “lawyers’ fees” with “loyalties” and as specific as that time he got upset when his daughter wanted Nike sneakers instead of Yeezys (“This is not about me,” he now realises). There are sober allusions to departed loved ones and big-picture geo-political travesties, but the long parade of guests – Lil Yachty, Playboi Carti, Fivio Foreign, Travis Scott, Kid Cudi, Jay Electronica, Chris Brown, Roddy Ricch, the Weeknd, the list goes on – means a constant cross-referencing of personal-professional concerns and backstories. 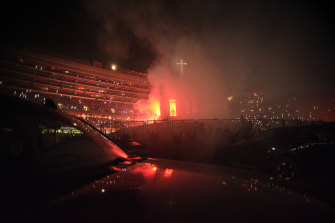 It’s all cool baggage for fans to unpack in coming weeks and months. Initiation riddles into a whole world of alter egos and half-truths, beat-ups and beefs that makes WWF look, like, totally fake. What might sometimes sound to the casual ear like an overlong and overhyped dump of half-finished musical ideas is actually a coded labyrinth of meaning – now with extra Jesus.

At face value, the joy of Donda lies in West’s trademark sonics and crazily fractured construction: a bespoke matrix of distressed samples and autotuned wordplay that blow old notions of metre and time signature to smithereens. That and the gospel flourishes of organ and voices raised in passionate yearning that elevate the album’s finest moments, from the old school R&B of Believe What I Say to the false idol bonfire of Heaven and Hell.

Ultimately, as befits our man’s singularly narcissistic reputation, Donda is more stream-of-consciousness testimony from his own golden pew than any kind of coherent musical statement for the enrichment of humanity. From its first blithely cancelled release date back in July, this was always more a rolling act of audacity than anything as static and defined as a record. With argy-bargy between West, his record label and fellow artists already muddling the Twittersphere, it will doubtless continue to drop for a good while yet.