Any seasoned sandwich eater out there is well aware that the secret ingredient to every good sammy is a handful of potato chips. But what about other crunchy toppings? Well, Kentucky-based fried chicken chain KFC was thinking outside the box when it came up with none other than a Cheetos-topped chicken sandwich. Yes, you heard that loud and clear, and KFC’s limited-time Cheetos Sandwich for summer 2019 is going to be available within just a couple short weeks, and it looks seriously mouthwatering.

If you’re not familiar with KFC’s Cheetos sandwich, it’s what the brand calls a "dangerously cheesy mashup" between your favorite chicken sandwich, and — of course — the cheesiest snack food out there. According to KFC, it features a crispy breaded chicken filet that’s drizzled in a "special Cheetos sauce." Then, it’s placed atop a toasted bun that’s been lathered in mayo and topped with a layer of crunchy Cheetos. It will be available at KFC restaurants across the country as of July 1, and the price varies by market. However, crunch fanatics won’t be able to sink their teeth into these babies forever — in fact, you will only be able to get them for just four short weeks. *Cue sad violin music.* With that, you’ll have the entire month July to chow down. 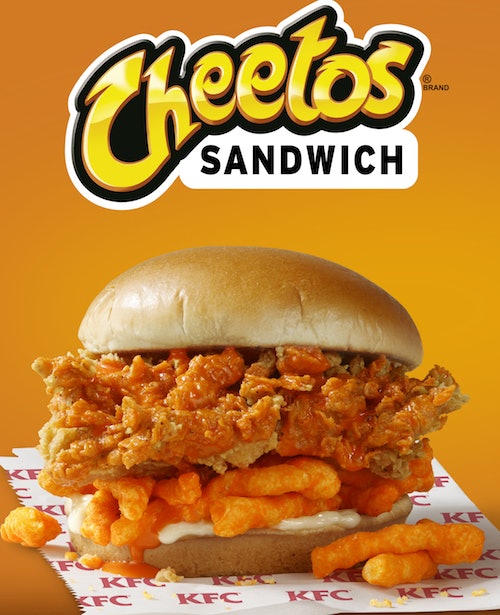 Wow… that looks unfathomably crunchy. I can almost hear it when I look at this picture.

Anyway, you’ll be able to snag one for yourself in just a couple short weeks. But, here’s a pro tip: Definitely make sure to keep a glass of water nearby, because all that cheesy goodness is bound to make you thirsty.

Oh, and if you’re living anywhere near New York City, you’re in luck, because this glorious bite will be hitting up your tastebuds before anyone else’s. According to the chain, Chester Cheetah will be fully taking over KFC’s 242 East 14th Street location on Thursday, June 27. Customers will be able to stop by anytime between 4 p.m. and 8 p.m. to taste the new creation, as well as other limited-edition Cheeto-infused specialties such as Cheeto-Fried Hot Wings, Loaded French Fries, and the KFC Mac and Cheese Bowl. So, definitely keep your dinner plans open, and come hungry. While KFC’s Cheetos Sandwich looks positively unreal, there is no doubt in my mind I’ll end up falling in love with it. So, I’ll most likely be stocking up on these for the next few weeks, because that month-long release is way too short for my liking. Anyway, happy crunching!