King Charles has only been the monarch for a few days, but he has spent most of that time in the public eye. Express.co.uk spoke exclusively to Inbaal Honigman, celebrity psychic and body language expert about the King’s behaviour – specifically the time he was seen gesturing for items on a table to be moved, and yesterday when he gently grabbed Camilla, Queen Consort’s arm to encourage her to wrap up their conversation so they could leave.

Inbaal said: “The King’s recent body language suggests that he is used to being in charge and expects attentive obedience from those around him, whereas the Queen Consort’s movements and expressions tell of her more non-confrontational nature.

“Charles III has only been King for a few days and has already gone viral with a couple of clips of him gesticulating for some table furniture to be removed from his desk.

“As he’s about to sit down with some documents, he flicks his hand in the direction of a pair of items, pointing them out to his aides and showing where he’d like them to go.

“The curtness of the movement is notable in its impatience, and he fails to make eye contact with the aides. 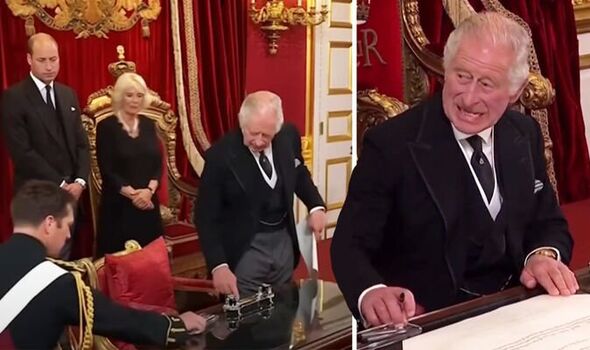 “The lack of eye contact shows that his expectation is to be obeyed, and it doesn’t matter to him who carries out the required task,” she added.

“A different clip from the same occasion, shows the King pushing the pen tray away, with short, impatient gestures, and clenching his jaw to demonstrate stress and urgency.

“When we are stressed – we clench. Face, shoulders, neck, this is all-natural at a time of personal turmoil, and the King is grieving for a much-loved parent,” the expert noted.

“While the pen saga unfolds, the Queen Consort is right behind him. She can be seen taking an involuntary step backwards as if she wishes to distance herself from the display of impatience.

“As the King shows his exasperation, she looks away, and at one point even looks upwards in what seems very like an exasperated eye-roll.

“Her facial expressions show that she finds impatience unnecessary. She appears to be of a peaceful disposition,” Inbaal continued.

“In the footage of the King and Queen leaving Westminster, he appears to be at ease.

“He talks to people using his hands to punctuate his sentences, and he shares a gentle smile, and faces, often touching his conversation buddies, which shows that he’s attentive and relates to each person individually and attentively. He isn’t hurried.

King Charles and Camilla leave the Houses of Parliament

“When a car arrives, he reaches out to his wife and gently steers her by the arm.

“This gesture is close, intimate and affectionate – she doesn’t flinch at it, this isn’t a show of undue physicality,” she explained.

“The move is respectful in its brevity. He steers her gently and patiently, because the car has come, not because he’s run out of patience.

“There’s good reason to believe that Charles is the dominant partner. The ease with which he ushers her shows that this dynamic is usual for them.”

The videos of King Charles requesting stationary be moved from the table have divided fans on Twitter.

User @Naptha2235 wrote: “I found it quite funny actually. Theres not enough room on his desk and as the literal KING of the UK and head of state of the commonwealth, yes stuff should be moved by his staff, that’s what they are there for. Or just give him a bigger table to start with.”

“Whoever organised that desk is to blame, it’s not big enough to start with, esp with trying to sign two large documents. I would be annoyed to, so observe the situation before passing judgment on the King!” @SuziWong16 added.

@TavernTanners suggested: “My kind side says in the rehearsal the desk looked different and a very tired, bereaved and stressed, man was trying to make the etiquette perfect. Not coping as well as normal. Camilla’s face is a sign that she recognises this doesn’t look great.”

@DalpraPaul noted: “I love Camllia’s expression in the background! Oh, is this what life will be like now!”