Paying superannuation on taxpayer-funded parental leave payments is still a live issue within Labor’s ranks ahead of the May 21 federal election as leader Anthony Albanese leaves the door open to axing the pledge.

Senior party sources who spoke on the condition of anonymity said the policy, which Labor took to the 2019 election, was being “actively debated”, and finding savings to cover the expected $200 million-a-year cost was the main issue. 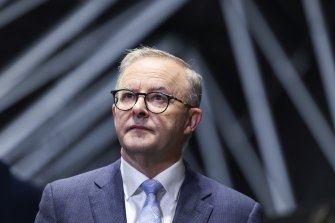 Asked on Thursday whether the party had dumped the super policy, Albanese was circumspect.Credit:Alex Ellinghausen

Following an internal review of Labor’s 2019 election performance, key policies including housing tax reforms were jettisoned last year to put the party on a campaign footing. But it is yet to announce whether it will keep its super promise with just over two weeks left of the campaign.

Asked on Thursday whether the party had dumped the super policy, Albanese was circumspect.

“We announce our policies during the campaign. We haven’t announced that as a policy. We support paid parental leave. We can’t commit to everything that we committed to during the last campaign,” he said.

The Coalition walked away from paying super on government-funded paid parental leave before the March budget, while the Greens and several independent candidates say adding super payments to parental leave is a “no-brainer”.

Greens spokesperson for women Larissa Waters has said both major parties clearly understand there is a role for government in paying for parental leave, so it should do “the whole job” and add super to it.

“It’s a very small change that would have a really big impact,” she said.

“We can afford to take this step toward retirement equality, it’s just a matter of political will,” she said.

Fellow independents Zoe Daniel and Kylea Tink, who are running against moderate Liberals in Melbourne and Sydney respectively, also back the policy.

The 2020 retirement income review recommended applying super to paid parental leave, which it estimated would cost $200 million a year. Chairman Mike Callaghan said it would make a worthwhile difference that would improve the fairness of the retirement income system.

The super industry has said a government move to add super payments to parental leave would encourage more businesses to do the same. Several large employers have already started applying super to parental leave; Telstra has agreed this year to include it in their employment contracts.