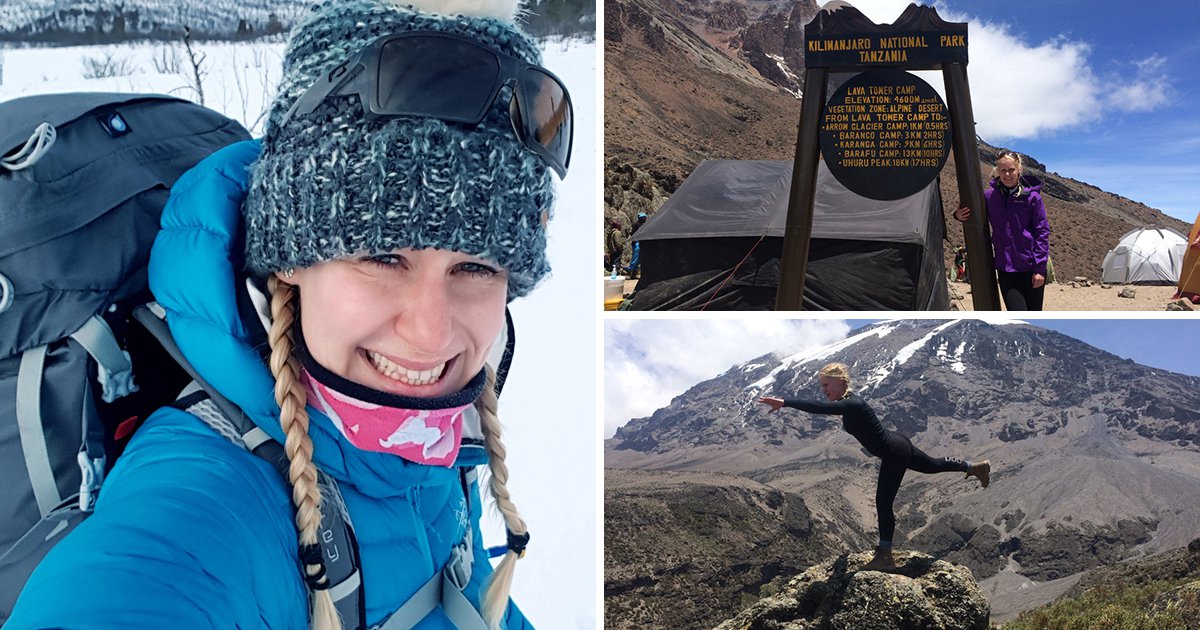 Despite spending years working towards her dream job as a lawyer, Lucy Wheeler felt like she was missing out on adventures.

Worried about being chained to a desk for the rest of her life, she decided to quit and instead spend her time taking on challenges across the world.

Since then, Lucy, 34, has trekked the Arctic Circle, climbed Kilimanjaro and raced across a Jordan desert, after deciding there was more to life than the office.

Originally from Sheffield, Lucy, of Knebworth, Hertfordshire, who has a nine-week-old daughter, Heidi, with her HR consultant husband, Andrew, 37, said: ‘I suddenly realised I was doing my dream job, but I wasn’t living my life to its fullest anymore.

‘I’d always been really active growing up, I was interested in horse riding and being outdoors, but there came a point where my career took over.

‘After university, it’s natural to prioritise getting on the career ladder.

‘I remember finding myself in my job as a qualified solicitor with an office window seat – prime real estate – and realising that I didn’t feel fulfilled.’

‘Once I’d done it, I’d caught the bug, I was so eager to go on another adventure,’ Lucy said. ‘I picked a quicker trek, which was one of the more difficult ones, but once I’d completed it, I felt amazing.

‘I felt like I’d found what had been missing. I’d been spending all my time working and watching my friends have adventures of their own on Instagram, but now I was doing these things for myself.’

When she returned, she met Andrew through mutual friends and they quickly fell for each other.

‘By the time I was planning my next trip, I had started a relationship with Andrew, so he joined me on my next adventure,’ she said.

‘We decided to trek the Arctic Circle.’

Alongside that trek, she also committed to take on two other physical feats – with all of them falling in the space of three months.

‘A group of us went trekking for seven days and it was a gruelling hike.

‘At the same time, it was like a wonderland. Gazing out at the stars at night and standing out waiting to see the Northern Lights was incredible.

‘It was so different from going on a guided tour, as we were in the middle of nowhere.’

Back home, in April 2018, Lucy ran the London Marathon and, a month later in May, she took part in a 24-hour cycle from London to Paris.

She said: ‘I hadn’t actually ridden on a road bike until the day of the cycle.

‘I trained on my regular bike, despite everyone telling me I needed to get a road bike.

‘That morning, on the driveway, I clipped my cleats into place and cycled promptly straight into a bush.

‘I had underestimated how different the bike would be to ride, but I got the hang of it in the end.’

Next up, was six marathons in a five-day physical challenge across a desert in Jordan in the Middle East in October 2018.

She said: ‘We’d set off super early in the morning, it’d be dark, and we would run with glowsticks.

‘It would be pitch black and there’d just be these neon sticks bobbing around in the darkness.

‘We were basically trying to beat the heat, as it was unbearably hot by midday.

‘It was quite scary at times, we could hear animals in the distance, but it was an amazing experience too.

‘I remember one day, as the sun began to rise, I rounded the corner and stumbled upon camels.

‘They started to gallop alongside us as we ran. It was absolutely incredible.’

She managed to marry Andrew in 2019 and then gave birth to Heidi in April 2021, and although they’re stuck in the UK due to Covid, they’ve already been getting her involved in their adventures.

She said: ‘I don’t have a specific idea in mind for what I want to do next yet, as everything feels different now, especially with a baby.

‘But we’ve already been hiking with her in a harness.

‘It’s been great to get back outside and be busy with her.

‘I’ve also set up my own business, Lucy Legal Limited, so I’ve been pretty hectic with that too.

‘But I’m sure it won’t be too long before we’re off on another adventure again.

‘There are so many places I’d love to travel to and now that I’ve truly started living life to the max, I can’t stop!’