It was Les Murray who insisted that his own poetry should stand on its own merits, without the need for mediation.

So the first state memorial service given to a poet in NSW since the death of Dame Mary Gilmore in 1962 allowed Australia's unofficial Poet Laureate to largely speak for himself in readings of some of his most acclaimed, personal and vivid works.

"We won’t say much about who he was," State Librarian Dr John Vallance told the gathering.

"The poems are the thing, and they mean – as Les himself once explained – whatever you think they mean. Which is why they are so challenging – and wonderful. Trying to explain Les’ poems now would be a little like having an ornithologist explain things to a flock of birds." 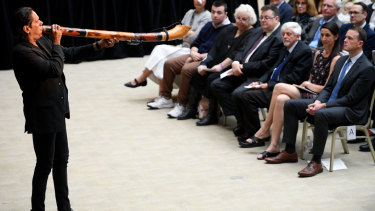 Indeed, a soundtrack of native birdsong greeted Murray's wife Valerie and adult children as they were joined by the NSW Governor Margaret Beazley, the NSW Premier Gladys Berejiklian and the Federal Minister for arts, Paul Fletcher, Labor's Tony Burke and writer Tom Keneally in the reading room of the Mitchell Library where Murray's 30 published volumes are shelved.

The celebrated poet, known as the Bush Bard of Bunyah, died on April 29 at a Taree nursing home, aged 80. He had won numerous international literary awards in his lifetime including the TS Eliot Prize, and the Queen's Gold Medal for Poetry and was for years discussed as a candidate for the Nobel Prize in Literature.

Poet and lawyer Geoffrey Lehmann met Murray at Sydney University in 1957 and collaborated on his first poetry collection The Ilex Tree.  Murray's student days were chaotic but marriage at age 23 had brought order and happiness to his life.

Writer Nikki Gemmel said Murray had given her first break as a writer and was generous with other learning their craft. He wrote in his acceptance letter of her first work, "if you've made this up, you're a genius". It was the story of three generations of her family. 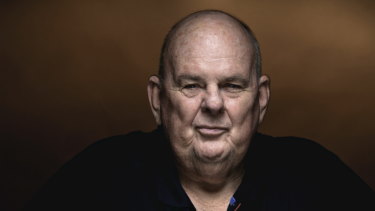 Others also attested to the gift of confidence he gave them in their early careers.  Academic Dr Stephen McInerney was one of many poets to have received postcard messages of encouragement from Murray: "He never gave praise just to be kind but he was never unkind."

Much of Murray's work belonged to the Christian mystical tradition which mirrored divine truth, according to Father Paul McCabe, who knew Murray for many years, offered the funeral mass, and admitted to substituting Murray's poetry for psalm readings during daily prayer for extra inspiration.

Introducing Murray's The Dream of Wearing Shorts Forever, youngest son Peter said his father hated to be trapped or pinned by some external influence, be that fashion or seatbelts.

Mozart’s Clarinet Concerto brought Murray's memorial to a close, the piece having special meaning for his widow.  Driving home from Queensland, chatting and listening to music as they drove, she had asked, out of the blue, for the concerto to be played at her own funeral. "Suddenly the piece came on the radio and Les was so moved that he cried, tears rolling down his cheeks," Vallance said.

"It was Murray’s exceptional capacity to illuminate the edge of the clearing, the boundary of nature and culture, where the bush meets the establishment, the ''giddy line midway'' which means that he will never be classed and done with. He is part of our lives for good."