Why I’m backing Boris to be Britain’s freedom fighter and unleash the potential of Brexit, writes LIZ TRUSS

We have a massive task ahead of us over the next six months. We must leave the European Union, deal or no deal, by October 31. At the same time, we must unleash the dynamism and talent of Britain to make a huge success of our economy by taking full advantage of the new freedom we will have.

This task is not for the faint-hearted. It will take bravery and a strong platform of policies that can deliver. Boris Johnson is the person with the credibility and oomph to lead at this crucial time and bring Britain with us. I am proud to be working with Boris on a policy platform based on popular free-market conservatism that can take us through Brexit and beyond.

In recent years, we’ve lost confidence to make the argument that Conservative principles can change people’s lives. We’ve let Labour tell us that more red tape, public spending and higher taxes are inevitable. We’re told that the country is beset by misery, young people are all flag-waving revolutionaries, wealth creators are the enemy, and only the coming of Jeremy Corbyn’s Socialist utopia can solve our problems. 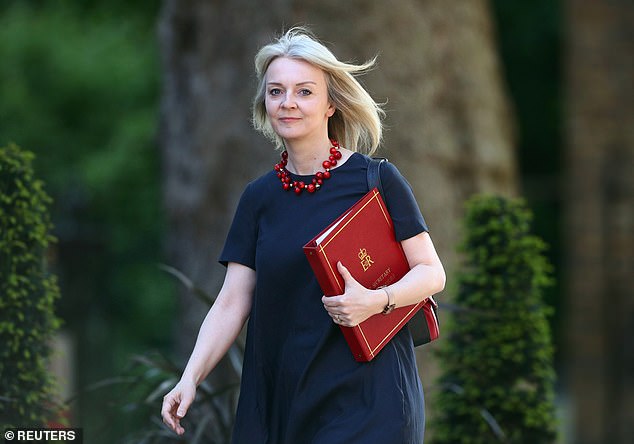 We have a massive task ahead of us over the next six months. We must leave the European Union, deal or no deal, by October 31, writes Liz Truss. (Pictured) Liz Truss outside Downing Street last month

We need a leader who can fight Labour’s negative and destructive worldview head-on. Boris has proven he’s a winner, and now we need someone to win the battle of ideas. He’s on the side of the challenger, the start-up, the sole trader.

We share a deep optimism about the power of individual creativity and enterprise to deliver progress and prosperity. Only by standing up and making the case for popular, free-market conservatism will we have any hope of winning the next Election and leading Britain into the future.

To succeed, we must harness that enterprising spirit. By cutting taxes like stamp duty that hold back home ownership and growth, we can boost the economy to deliver more jobs and higher wages.

Where business regulations are having little to no benefit, they should be scrapped and there should be a high bar for new regulations coming in.

Likewise, we should embrace freeports and free planning zones – areas where firms can import raw materials, make finished goods and then export them, with none of the border taxes the rest of the country has to pay.

They have the potential to create new hotbeds of economic growth in all corners of the UK. 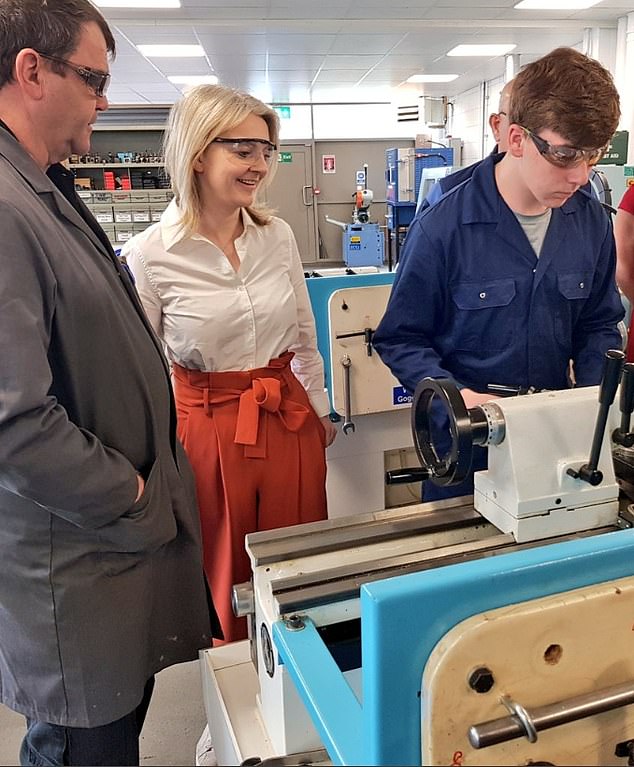 At the same time, we must unleash the dynamism and talent of Britain to make a huge success of our economy by taking full advantage of the new freedom we will have, writes Liz Truss. (Pictured) Liz Truss visits apprentices at Southport College, near Liverpool

Conservative mayors in Birmingham, Tees Valley and elsewhere have shown us how it’s done. By unleashing enterprise and building world-class infrastructure, we can make the UK a country of 20 global cities, not just a handful. From Bolton to Walsall, Plymouth to Inverness, our nation is full of pent-up economic potential.

We won’t make Britain greater by punishing high-growth business or regions. Instead, we need to raise every part of Britain up by giving them freedom to succeed.

To do that, we must make sure every person has the basic tools to lead a successful life. That means a good school, opportunity for a great degree or apprenticeship, better local roads and public transport, and ultra high-speed broadband for everyone. But it shouldn’t mean tax hikes. As Treasury Chief Secretary, I know there’s still waste to cut, and every pound wasted on a vanity project is a pound that cannot be spent on a classroom teacher or road upgrade. We need to be prepared to stand up to the vested interests who have come to rely on Government handouts, and if Boris has proven one thing, it’s that he doesn’t shy away from a fight.

Finally, I’m backing Boris because he’s the candidate who best represents the future of Britain. As someone who grew up in a Left-wing household, my first political act was rebellion. It’s why I’ve always believed people should be free to live their lives as they see fit, without being told what to think, how big their pizza should be, or what to view online.

If there’s one thing young people value more than ever, it’s their personal freedom in a world that has never been more open. Boris is a British freedom fighter. He’s the original champion of the social freedoms brought in by Conservatives since 2010. He’s the candidate to carry the Conservative torch to the next generation and win young people over to the cause of freedom in a world where people like Jeremy Corbyn want to take it away. As I’ve travelled the country talking to working people about public spending, they, by and large, tell me the same thing. They don’t want government to control every part of their lives or hand them everything on a plate. They want the opportunity of a good job, to keep more of their own money, to get from A to B without breaking the bank, and a good school place for their child. And they want reasons to be cheerful about the future of their country.

Boris Johnson, and the platform on which he stands, is the candidate who can deliver that. He has massive appeal to people in Britain who ask nothing more than for the opportunity to lead a better life.

He’s the leader who can get us out of the EU, but also give people hope and optimism about their future and the country’s future. There’s only one person for the job, and that’s why I’m backing Boris.