A Melbourne businessman and former political staffer will replace retiring speaker Tony Smith in his outer-eastern Victorian seat of Casey.

Aaron Violi, a former adviser to Senator James Patterson, will become the party’s candidate after beating a field of six other candidates including three women on Saturday afternoon. 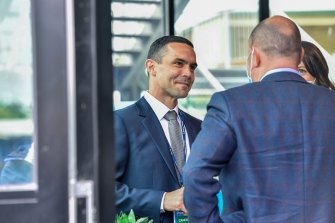 More than 250 party members voted in the preselection for the seat, which stretches from the outer-eastern suburb of Belgrave into the Dandenong and Yarra ranges, at an event at the Yarra Valley Racecourse that was also attended by senior Liberals including Treasurer Josh Frydenberg.

In the final round of voting, Mr Violi beat Andrew Asten, Education Minister Alan Tudge’s former chief of staff, by 152 votes to 101. The third candidate was Melbourne City councillor Roshena Campbell, who finished ahead of four others, including prominent oncologist and Guardian columnist Ranjana Srivastava.

After the ballot Mr Violi, a third generation resident of the seat, said he was “really excited by the opportunity”.

“The focus is now on Casey – the wineries, the hospitality sector, the businesses like tourism and the families of Casey,” he said.

“There are big shoes to fill in replacing Tony Smith and the first priority is to engage with the community, share the government’s message about the economy and the priority is to win the seat.”

Mr Frydenberg, who had meetings with some of the candidates on Friday but did not back any of them, said there had been an outstanding field but there could only be one winner on the day.

“Tony Smith was widely respected across the party and here in Casey. He has left an indelible mark. Aaron has big shoes to fill and he now has to forge his own path.”

“I was heartened by what I heard today, it was a good sign for the Liberals.” 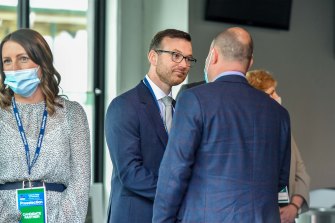 Two party sources at the event, speaking anonymously because party rules prohibit them from discussing the preselection publicly, said the three candidates in the final rounds of voting delivered the most impressive speeches.

Mr Violi, who had the deepest local connections of the front-runner candidates, highlighted his links with the seat and talked about the challenges facing small businesses and infrastructure in a new suburb called Kinley that is being developed.

The question was a pointed reference to allegations detailed by The Age and 60 Minutes of a factional operation run out of the offices of federal MPs Michael Sukkar and Kevin Andrews, who are allies of Mr Asten.

Audio problems at the venue made it difficult for some of the attendees at the back of the room to hear Ms Campbell and, to a lesser extent, Mr Asten. Another source said all three women making their final pitches found it difficult to be heard because of the technical problem.

The penultimate round of voting had Mr Violi on 100 votes, Mr Asten on 85 and Ms Campbell on 69, meaning Ms Campbell’s votes broke 52-17 to Mr Violi in the final round.

Mr Violi is aligned with party president Robert Clark, whose grouping is at odds with the faction led by Mr Sukkar, Mr, Frydenberg, Mr Tudge and Health Minister Greg Hunt. Mr Asten is aligned with the federal MPs’ faction.

Mr Violi holds a bachelor of arts from Deakin University and a masters of business administration from the same university. He worked for Yarra Valley Snack Foods before joining Mr Patterson’s office in 2016. He now works as head of partnerships for online food ordering company Ritual.co.

The Coalition could face difficulty retaining the seat of Casey. It holds the seat on a margin of 4.6 per cent, but Mr Smith has been a popular local member for two decades and his resonance will be difficult to match for a first-time candidate.

At the 2019 election, the Coalition received a 7-percentage-point lower primary vote in the senate, where Mr Smith’s name was not listed, than in the lower house, indicating a chunk of locals voted Liberal because of their support for Mr Smith.

Mr Smith increased his margin by 0.1 per cent to 54.64 per cent in the two-party-preferred vote at the 2019 election but in his absence, Labor strategists believe they have an outside chance of claiming it.

Fascinating answers to perplexing questions delivered to your inbox every week. Sign up to get our new Explainer newsletter here.