CIDER fans need to listen up as Magners is launching a rosé cider this summer inspired by the popularity of pink gin and rosé wine.

The blush-coloured booze, which reminds us of pink rose petals, is made from 17 different types of apple, including red apples.

Magners reckons rosé cider is popular in other parts of the world, particularly in America where it says rosé cider counts for 13 per cent of all cider.

It's not made with rosé wine or even with rose petals, instead it gets its name from its pink colour.

The Irish brand already sells an apple cider, a pear cider, and a dark fruits variety.

But sadly you can't nip down to your supermarket to buy this latest bottle as it's only launching in pubs and bars for now – and each pub can set its own price. 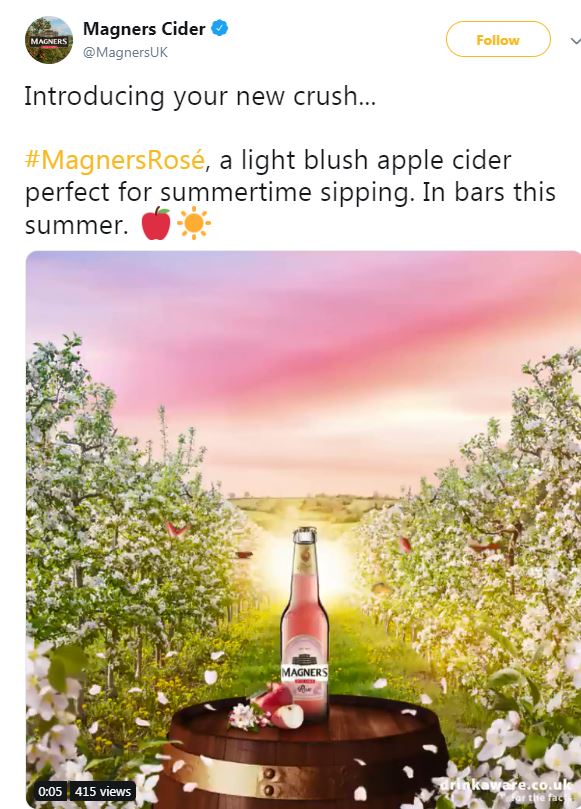 A bottle has a 4 per cent alcohol by volume (ABV) content and contains 125 calories.

An adult man should consume around 2,500 calories a day, while it's 2,000 for a woman, according to NHS guidelines.

Magners wouldn't confirm if there's a recommended retail price, only saying that it will be in line with other bottles of cider.

For comparison, its 568ml bottle of original cider costs £2 at Asda, Morrisons, and Sainsbury's and has a 4.5 per cent ABV – but pubs and bars tend to charge more.

If the rosé cider tickles your fancy, you can buy a 330ml bottle in G1 Group pubs in Scotland from this month and in mostly independent pubs in England, Northern Ireland, and Wales from July.

But Magners does hope to sell the rosé cider in supermarkets in future.

Rival brand Thatchers also sells a rosé cider, which costs £2 for a 500ml bottle at Tesco.

While Angry Orchard's rosé cider costs £6 for a 300ml four-pack at Asda.

Duncan Frew, commercial and marketing director at C&C – the company behind Magners – said: “The introduction of Magners Rosé will certainly pique the interest of consumers across the UK.

"Tapping into the global trend for pink gin and rosé wine, its light blush colour and bespoke glassware is sure to stand out both behind the bar and in hand."

Budget supermarket Aldi has launched a new range of fruit cider in cans just in time for summer.

While wine brand Echo Falls now does a PINK GIN – and it sounds delicious.

And Tesco is selling a new purple Rekorderlig cider that tastes of parma violets and blackberries.