June and Jennifer came face-to-face during the chaotic May 21 episode of ‘Mama June: Road To Redemption’.

The May 21 episode of Mama June: Road To Redemption was all about little Ella Grace‘s birthday party. As we told you last week, Josh secretly invited Sugar Bear and Jennifer to the party without knowing that his wife, Lauryn “Pumpkin” Shannon, had already invited Mama June Shannon and her boyfriend, Geno Doak. So while Pumpkin spent most of this week’s episode prepping for the party with a smile on her face, she had no idea about any of the drama that was heading her way. 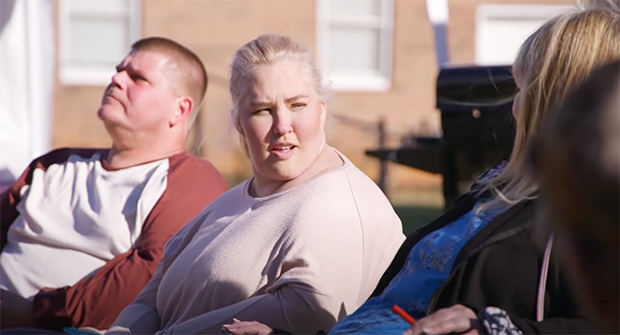 And once everyone did arrive, chaos ensued. First, it was Doe Doe‘s daughter throwing jabs at June, and then once Sugar Bear and Jennifer arrived, it got even worse. June and Jennifer started mocking each other’s weight and talking trash about each other. Then, after the tent nearly blew over, and Ella started crying, Jennifer decided to drop a major bomb — she told everyone that Pumpkin’s pregnant.

June and Alana “Honey Boo Boo” Thompson were shocked. They couldn’t believe that Pumpkin would share her baby news with Jennifer before telling them, and before Pumpkin could even explain what really happened (Josh spilled the beans to Sugar Bear without Pumpkin knowing), Alana ran inside and the episode ended.

Clearly, Jennifer accomplished what she wanted to at the party, but now, Pumpkin’s got quite a mess to clean up.

In other news, everyone finally convinced Alana to go see a doctor and get tested to find out whether she’s diabetic. She was pretty dramatic about the whole ordeal, but she did go through with it and now she just has to wait for the results. Until then, Pumpkin said she could eat whatever she wanted.