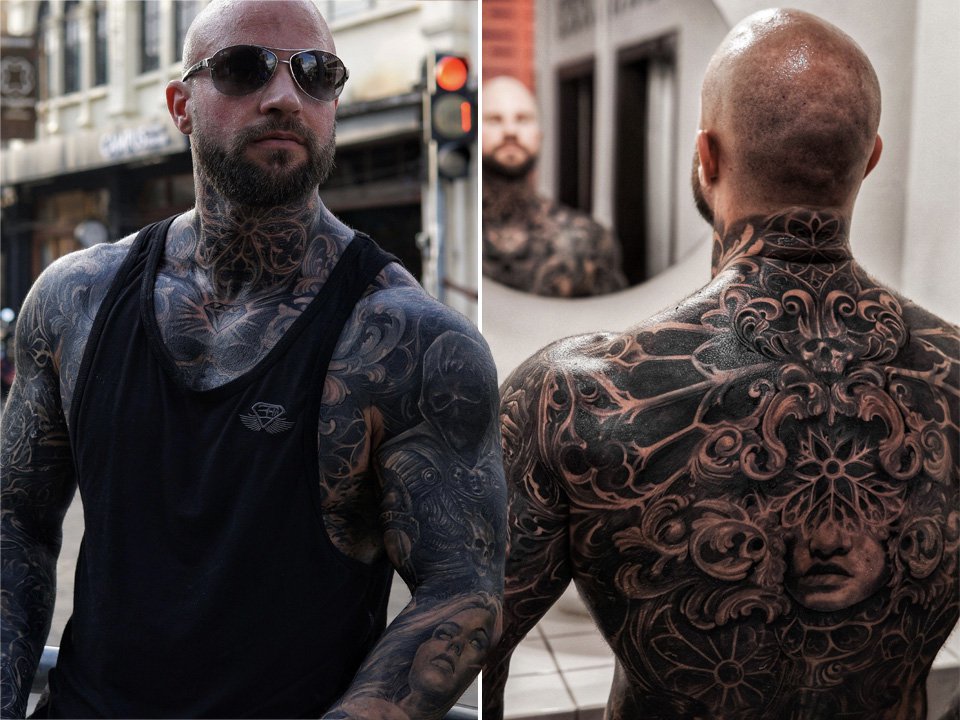 An Arizona man spent more than £10,000 having his whole body tattooed in a mere 40 days after being inspired by a model on Instagram.

Marketing specialist Paul Steiger, 35, from Scottsdale, Arizona, first dreamt of getting his whole body tattooed in 2017 after seeing a model on Instagram who had visited Phuket in Thailand to have work done.

As fate would have it, the pandemic foiled his plans, and flights he booked to Thailand had to be cancelled five times.

After waiting a further six months, Paul was finally able to get to Phuket, and walk through the doors of the Bloodline Tattoo Parlour to get inked.

Even though he’d been planning to get his body covered for years, Paul left the design specifics to the professionals.

Paul had his chest, arms, back neck and left leg completely covered in tattoos over the next 41 days.

During the painful five-hour sessions, tattoo artists covered Paul’s body in intricate gothic and floral artwork, including a haunted house on his side and a skull on his left forearm.

Paul says the most painful part of his body to get tattooed was his chest, with his upper ribs, knee, hands, fingers and the front of his neck being other sore spots.

His friends and family have been supportive of his decision, with only his 77-year-old grandfather saying that the tattoos won’t look great when he gets older.

All in all, Paul spent £10,700 on his body art, but got a significant discount because the parlour hadn’t been doing much business thanks to the pandemic.

‘I had a few tattoos before on my right arm and chest, but I honestly thought that my tattoos were s**t, looked like s**t, and I just wanted to fix them,’ said Paul.

‘So I thought I might as well do the whole body at once while doing it.

‘Four years ago I made a goal that I would go to Phuket, Thailand, which I found out about from an Australian Instagram tattoo model and get my tattoos at ‘Bloodline Tattoo’.

‘In summer of 2020 I finally saved up the money to get the work done and fly there.

‘Unfortunately my flights were cancelled about five times and I wasn’t able to get to Phuket until the end of January 2021.

‘Even then I had to do a fifteen-day quarantine in Bangkok first.

‘I was told numerous times that I could do it in Hungary or the USA for probably cheaper and sooner, but I had a goal and a vision and I had to make it happen. So, I did.

‘We worked Monday through Saturday doing roughly five hours per day, which added up to more than 200 hours in total.

‘As far as tattoo design, I didn’t plan it too much. I had some images I sent to the shop but nothing was set in stone.

‘All I knew was that I wanted to cover my whole body except my right leg and right butt cheek.

‘I wanted it to have a little contrast and I didn’t want to be average.

‘I feel like having a s**t ton of tattoos in 2021 is okay now without being judged as much as it used to be.

‘I do know that even though my grandpa totally accepts it and has only given me a very small amount of stick for it, I think he would prefer me without any tattoos.’

After a chance encounter with a TV and film producer during an overlay on his way back from Thailand, Paul hopes that his tattoo marathon will inspire a miniseries tattoo challenge show on Netflix or Amazon.

Paul’s only regret was that he ran out of time on his visa to get his armpits done at the same time, but he plans to rectify this as soon as possible.

‘I won’t ever regret my decision to get my tattoos,’ said Paul.

‘I can’t reverse it so why even think about that.

‘Only thing I regret is not getting my armpits done, because my visa ran out, which they told me would bug the hell out of me eventually and it already is.

‘I plan to get that fixed in the very near future.

‘It was one of the greatest experiences of my life and I would do it all over and go through the pain again if I had to.’