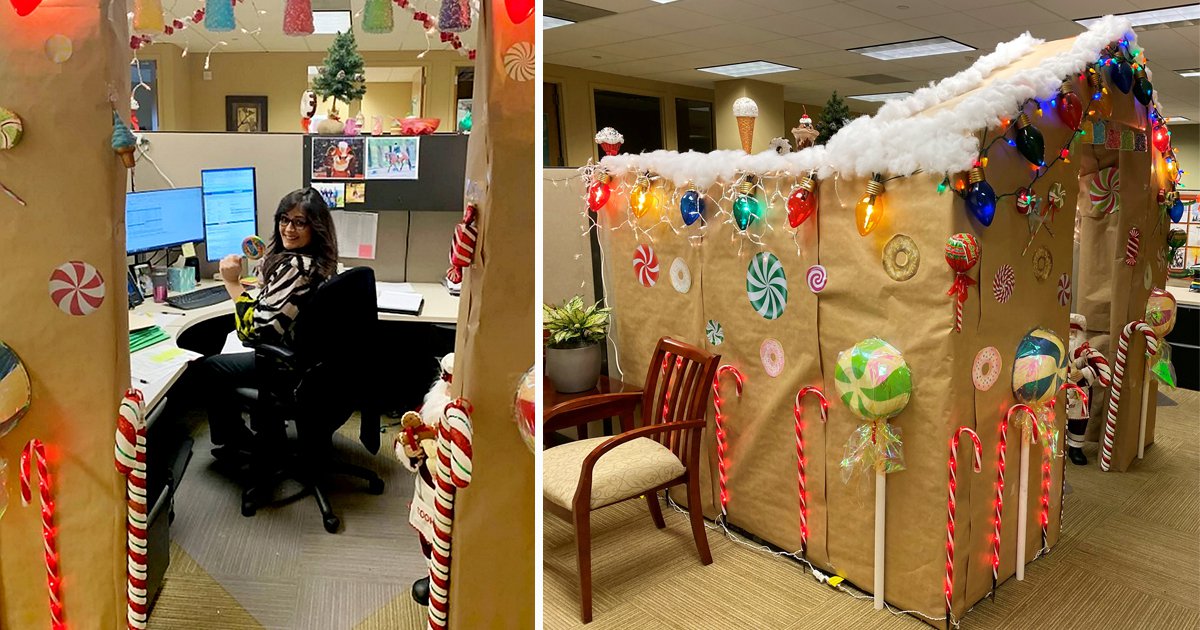 We all know those people who go all out for Christmas.

They divide us neatly into two camps: those who marvel at these festive delights and those who roll their eyes.

For those who fit into the former – the ones who stick on the Christmas tunes the moment December 1 hits, who adore mince pies and have already done their gift shopping – will appreciate Monika Orrey’s handiwork.

The practice manager had only been working at her new job for two months when the office announced a workspace decorating competition.

She threw herself in, spending eight hours turning her cubicle into a gingerbread house, complete with giant candy canes and fake snow.

The sides and roof of the house were made with duct tape and cardboard, covered with brown craft paper, while $1 bowls were painted and turned into lollipops and stickers added even more sweetness.

When her co-workers turned up at the office on Monday, they were blown away by Monika’s crafting skills.

Monika from Oakley, California, USA said: ‘I consider myself very festive, or as my daughter would say, I am “extra”!

‘I do indeed have far too many decorations at home according to my family but I know they love it.

‘When the cubicle decorating contest was announced, I knew I had to do something “extra” and started stockpiling cardboard right away.

‘I was at first concerned my new colleagues might think I was odd but soon remembered that I am happiest when I am authentically me so I pushed right past any concerns and got to planning.

‘I wanted to do something big and incorporate my well-known sweet tooth, and what better than a giant gingerbread house?

‘I wanted to share my love of Christmas and make people smile… oh, and win the contest!’

Despite some stiff competition, Monika’s gingerbread house did indeed take the top prize.

‘Many colleagues brought their kids in to see my gingerbread house and it brought smiles to many,’ she added. ‘Mission accomplished!’