Osmond follows producer and showrunner John Redmann in stepping away from the show ahead of its upcoming 11th season.

After one season with CBS’s daytime staple “The Talk,” Marie Osmond has announced she is stepping away from the show to pursue other projects and opportunities, including a show that will reportedly keep her involved with ViacomCBS.

Osmond’s decision comes on the heels of showrunner John Redmann, who’d been with the show for a decade. And while she didn’t directly suggest a connection between his departure and hers, she did paint him as a huge reason she took the job. 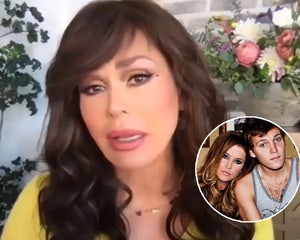 Marie Osmond Tears Up Discussing the Death of Lisa Marie Presley's Son: 'It's Very Close to Home For Me'

“One of the highlights of my year at ‘The Talk’ was working with my dear friend John Redmann, and I’m excited to continue our working relationship on several projects we are developing,” she said in a statement to Deadline. Perhaps he’ll be involved in that ViacomCBS project?

Osmond also cited how exciting it was to be able to spend more time at home now that her last two kids have entered college.

“[My husband and I] looked at each other, laughed and remembered we hadn’t been this alone together since 1982!!” she said. “So, at this stage of my life, I’m looking forward to spending more time with him and visiting all the kids/grandkids.”

Meghan McCain Is Over This View Question: 'No Other Host Has to Deal With This BS'

“Marie is a consummate professional, and we thank her for sharing her personal experiences, insight, as well as incredible talents, with our audience,” said CBS in a statement. “We will miss her humor, kindness and good nature, and wish her much success in her future endeavors.”

Some of those endeavors will come in the form of more Lifetime movies. She just finished work on “The Christmas Edition” and reportedly has two more in development.

Production on Season 11 of “The Talk” is expected to begin later this month, along with much of Hollywood as the fall season gets a slightly delayed start thanks to the ongoing COVID-19 pandemic.

Redmann’s replacement should be on board and announced before production picks back up. For now, the show will kick off with the remaining co-hosts, Carrie Ann Inaba, Eve, Cheryl Underwood and Sharon Osbourne — at least until a replacement can be found.

Osmond had joined the show as replacement for creator Sara Gilbert, who stepped away last year, who also left to explore other opportunities, like her starring and producing role on ABC’s “Roseanne” spinoff “The Conners.”

Got a story or tip for us? Email TooFab editors at [email protected]