‘Couldn’t be more proud of you!’ Meghan Markle’s makeup artist Daniel Martin praises the Sussexes for their fight against ‘racial injustice’ – after creating glowing beauty look for Duchess to accept ‘anti-racism’ award

Meghan Markle’s long-time makeup artist and close friend Daniel Martin has shared a gushing tribute to the Sussexes, praising their ‘commitments to racial injustices around the world’, after prepping the Duchess for a red carpet at a New York gala where the couple were honored with an ‘anti-racism’ award.

Martin, who did Meghan’s makeup for her May 2018 wedding and has worked with her on a number of occasions since, shared an image of the couple posing up at the event on his Instagram account, along with a praise-filled caption.

‘Couldn’t be more proud of you friends!’ he began his post, before going on to share his excitement at being reunited with the couple.

‘Back together to honor their commitments to racial and social injustices around the world and advocacy for mental health awareness. 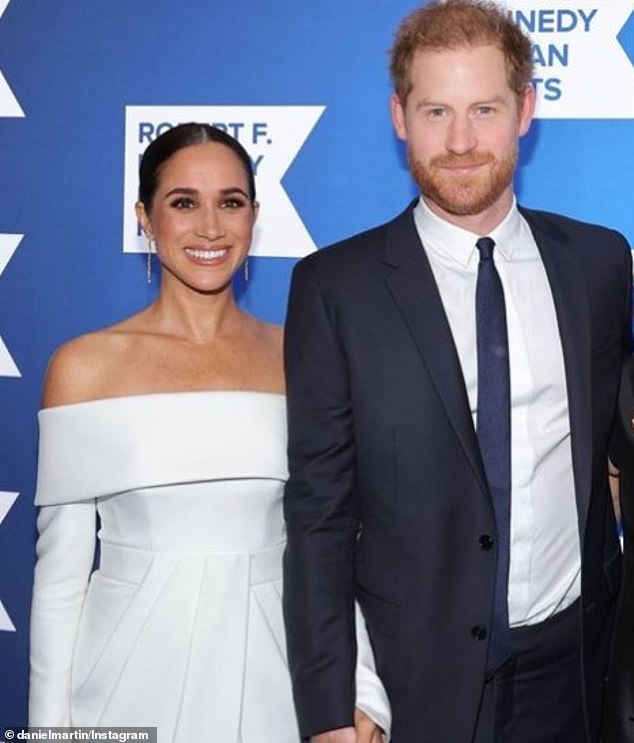 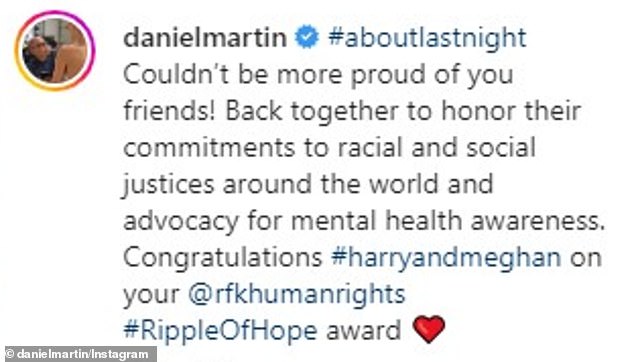 Meghan Markle’s long-time makeup artist and close friend Daniel Martin has shared a gushing tribute to the Sussexes, praising their ‘commitments to racial injustices around the world’ 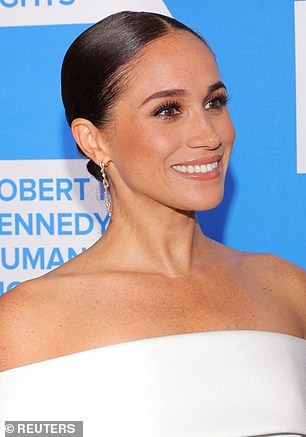 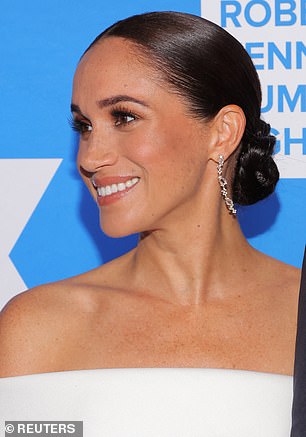 Martin’s tribute came just hours after he did Meghan’s glam for the Ripple of Hope Gala in New York, where she and Harry accepted an ‘anti-racism’ award

The beauty pro did not share details about Meghan’s makeup look for the evening – although many were quick to praise the glowing results in the comments section of his post, describing it as ‘beautiful’ and ‘gorgeous’. 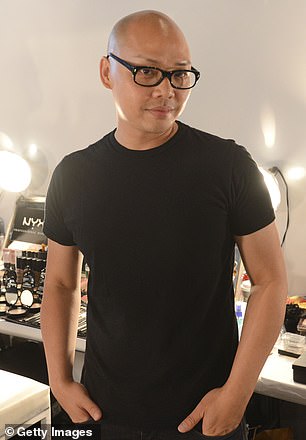 Meghan wore an off-the-shoulder custom-made Louis Vuitton gown to last night’s event – which was hosted by the Robert F. Kennedy Foundation – opting to go without a coat in order to leave her shoulders completely exposed.

The former Suits star was beaming from ear-to-ear as she arrived at the gala event in Manhattan, having flown into New York on a private jet with Harry on Monday.

Allowing her glamorous makeup look for the evening to really shine, Meghan had her long brunette locks slicked back into a low bun, providing plenty of opportunity for the cameras to capture her glam from every angle.

Images of the Duchess showed her sporting what appeared to be lash extensions, the final touch to a very glamorous smoky eye, which featured several bronze eyeshadow shades and a slick of dark black eyeliner to accentuate her lash line.

On her cheeks, Meghan sported a pop of bronzer, while Martin also looked to have accentuated her cheekbones with some crafty contouring.

Her brows were also perfectly coiffed and styled into the perfect point – while her pout had been given a slick of nude lipstick and gloss. 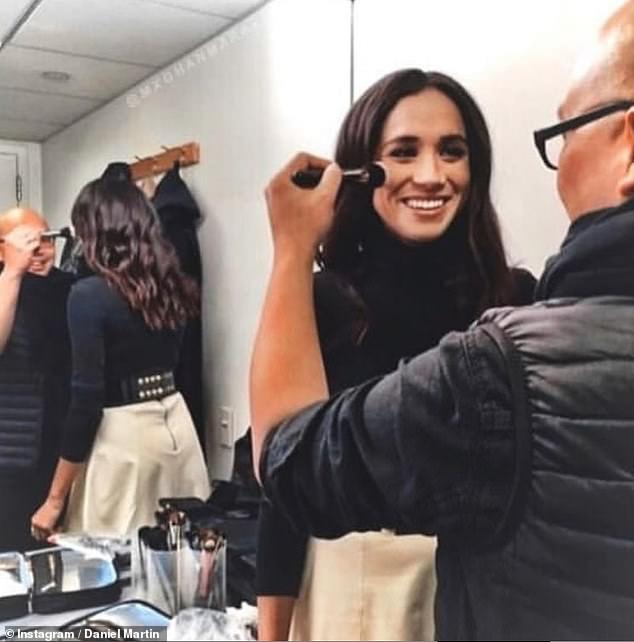 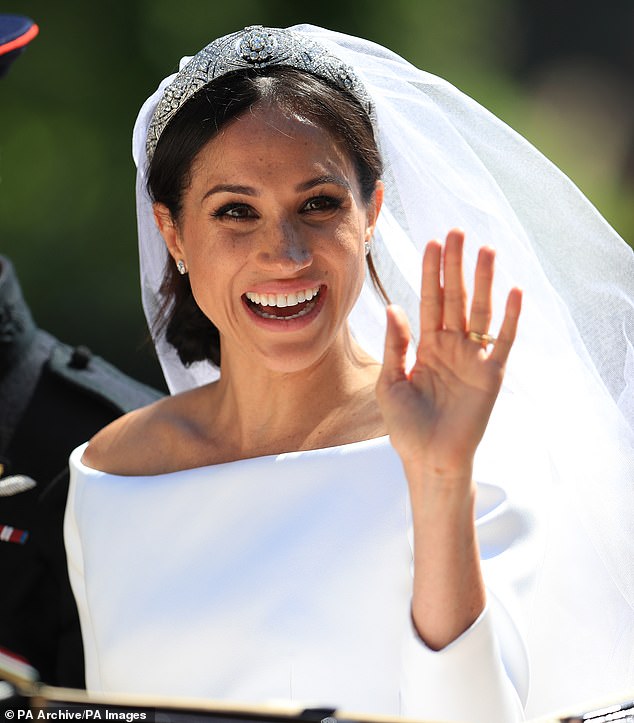 The Ripple of Hope Gala marks the latest in a long line of collaborations between Meghan and Martin – who also jetted over to London earlier this year ahead of the Sussexes’ arrival for the Platinum Jubilee.

Weeks earlier, he was also spotted in The Hague at the same time Meghan and Harry were in the country for the Invictus Games.

Over the years, Martin has become a firm member of Meghan’s inner circle – and he has also come to her defense on Instagram a handful of times, including in March 2021 after the Sussexes’ bombshell interview with Oprah was aired.

Sharing an image of the two of them preparing for an event, Martin added a short poem by Lao Tzu, a 4th century Taoist author and thinker.

It read: ‘Because she isn’t self centered, people can see the light in her. Because she does not boast of herself, she becomes a shining example.

‘Because she does not glorify herself, she becomes a person of merit. Because she wants nothing from the world, the world cannot overcome her.’

So it should come as no surprise that Meghan would turn to Martin for her latest red carpet appearance – which comes amid ongoing uproar over the Sussexes’ upcoming Netflix documentary. 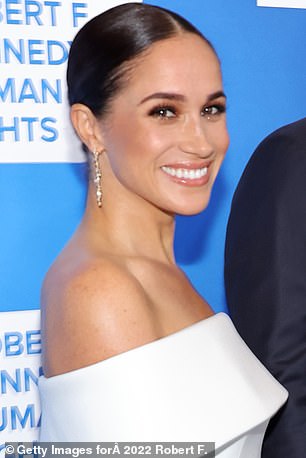 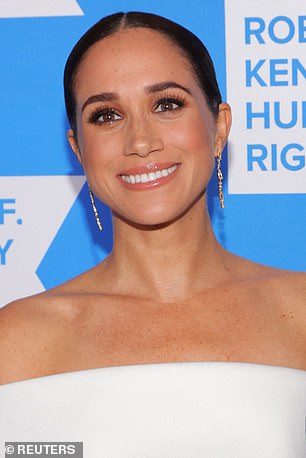 Meghan had her long hair slicked back into a low bun at the Ripple of Hope Gala, allowing her glowing makeup look to really shine on the red carpet 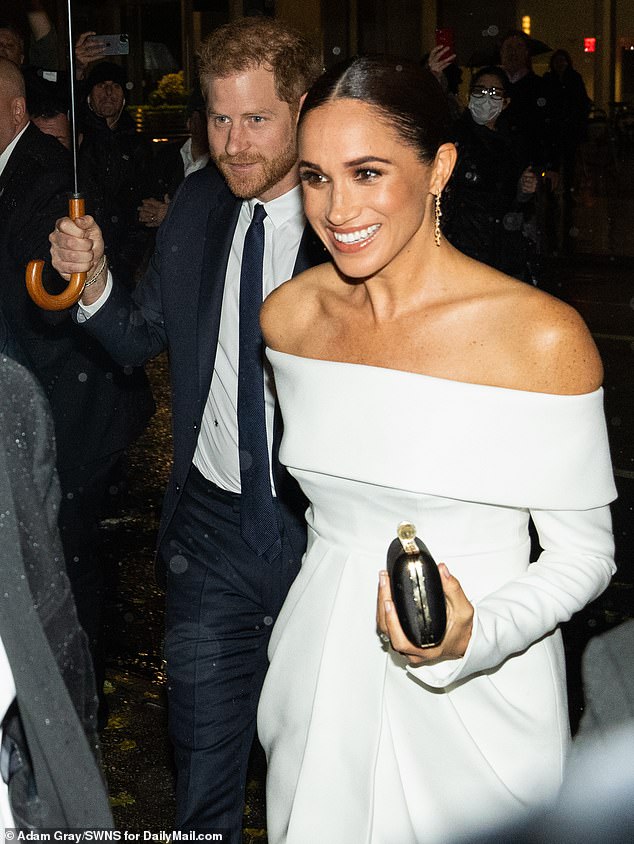 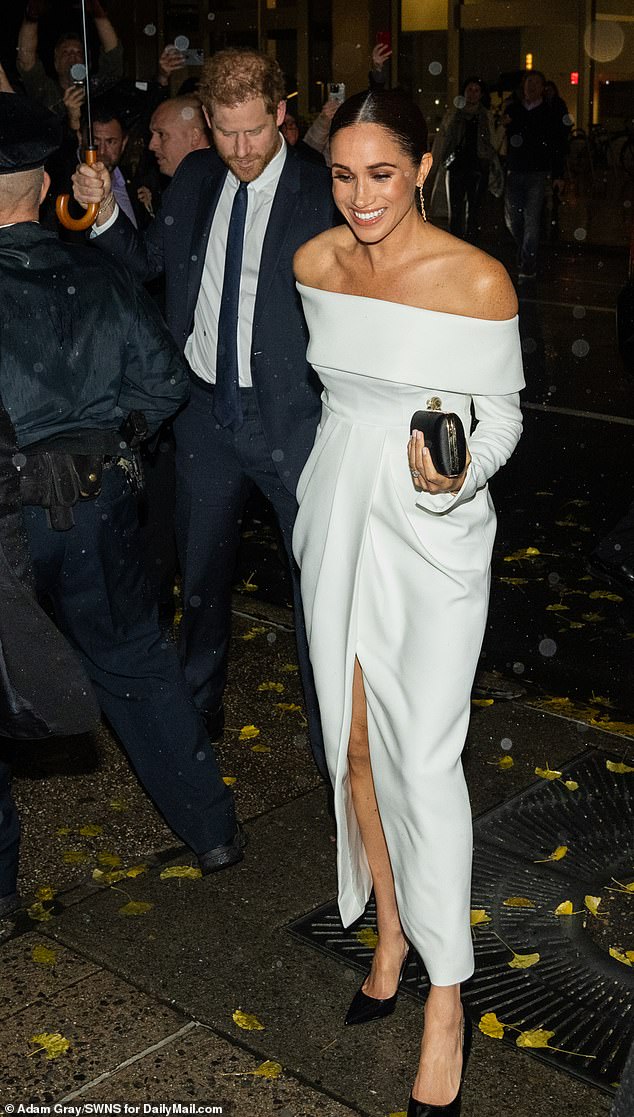 Meghan went all out with her ensemble for the evening, opting to wear a custom-made form-fitting white Louis Vuitton gown that left her shoulders exposed, and also featured a racy thigh-high split that flashed her lean legs as she strutted through the Manhattan rain.

She appeared to have taken a leaf out of the Princess of Wales’ stylebook when considering her look – which came days after Kate wore a very similar long-sleeved, off-the-shoulder style to the Earthshot Gala in Boston.

The Duchess paired the look with a boxy black clutch, long gold earrings, and a large aquamarine ring that once belonged to Princess Diana.

It is not the first time that the Duchess has worn the emerald-cut ring, which was commissioned by Diana from British jewelry brand Asprey in the 1990s and is estimated to be worth a staggering $90,000.

She was seen sporting the design for the first time at her May 2018 wedding reception at Frogmore Cottage, flashing a glimpse of the design as she waved at the cameras.

Meghan then wore the design for a second time during the Sussexes’ royal tour in Tonga in October of that same year.

Princess Diana first wore the stunning ring in 1996 during a trip to Australia, and she was pictured wearing the ring at a private viewing and reception at Christies in aid of the Aid Crisis Trust in 1997.