Miles Teller on alleged assault in Hawaii: ‘I got jumped’

Miles Teller allegedly punched in the face during Hawaii vacation

The Tellers are telling their side of a complicated story surrounding the alleged assault of actor Miles Teller.

While initial reports of the altercation claim the “Top Gun: Maverick” star was slugged by a man claiming the actor owes him $60K, both Teller and wife Keleigh Sperry claim he was actually jumped by two strangers.

“The story reported about Miles being punched in the face by @TMZ over ‘money’ is completely false,” Keleigh, 28, wrote on Instagram. “Miles was jumped by 2 men we have never met after they trapped him in a bathroom. It seems these same men have done this to many people and we appreciate your support Maui. This is now a criminal investigation.”

Shailene Woodley — who vacationed in Hawaii with her fiancé Aaron Rodgers and the couple — also shared the message on her Instagram Story.

Friday night, Teller himself challenged the narrative that he was punched by a disgruntled acquaintance while responding to colorful commentator Pat McAfee, who compared the island brawl to a tag-team wrestling match on Friday night’s “Smackdown.”

“I got jumped by two guys in a bathroom. Never met them before in my life but ya cool wrestling segue bud,” tweeted the 34-year-old “Whiplash” star. 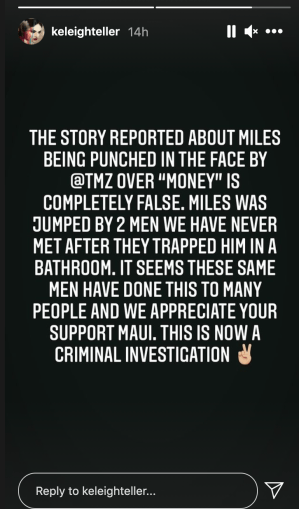 In better news for the actor, Teller is set to star in 10-episode Paramount+ limited series, “The Offer,” replacing Armie Hammer amid sexual misconduct accusations.

Teller will portray “The Godfather” producer Albert S. Ruddy in the series.