Australia is being considered as a test site for US company Moderna to study a COVID-19 vaccine for children as young as six months, in a sign of the firm’s interest in the country as it negotiates with the federal government over local vaccine production.

Moderna is evaluating Australia as one location for a trial that aims to enrol 6000 children aged from six months to 12 years, with most of the study taking place in the United States.

The move, revealed in the company’s quarterly report to US regulators in recent days, comes as the federal government talks to Moderna officials about the cost of building a facility to manufacture its messenger RNA vaccine in Australia.

The government is also evaluating bids from local researchers and vaccine developers, including health giant CSL, to build a domestic mRNA capability that might lead to local production from 2023, which is seen as the earliest practical date.

While the government chose not to strike a vaccine supply agreement with Moderna last year, it raced to negotiate a deal in May after health officials warned younger people against taking the AstraZeneca jab and recommended the mRNA vaccine from Pfizer instead.

The Moderna vaccine is expected to be cleared by the Therapeutic Goods Administration within weeks but has been shipped for months in large volumes to countries including Canada, Singapore and member states of the European Union. 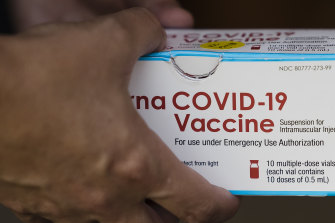 Millions of doses of the Moderna vaccine are coming to Australia.Credit:Bloomberg

Health Minister Greg Hunt said on Sunday he expected Moderna to send one million doses to Australia in September and three million doses each in October, November and December.

That compares to the forecast rate of about eight million doses of Pfizer in each of the final three months of the year.

Moderna revealed its trial plan in a financial report that showed a surge in net income to $US4 billion for the six months to June 30, compared to a net loss of $US241 million in the same period the previous year.

“The study population will be divided into three age groups (6 to under 12 years, 2 to under 6 years, and 6 months to under 2 years) and up to three dose levels of mRNA-1273 will be evaluated,” it said.

“The study will enrol in the US and up to two ex-US countries (e.g. Canada and/or Australia).”

Moderna mRNA-1273 is the company’s vaccine for people aged 18 years and older and is approved by many regulators worldwide. The company did not respond to a request for comment.

Industry Minister Christian Porter is speaking to Moderna officials in parallel with an “approach to market” to local companies, with one option being to find local partners for the company in an mRNA facility under the government’s $1.5 billion manufacturing policy.

Moderna produces vaccines in the US and Europe but is yet to open any manufacturing facility in Asia. It has an agreement for “fill and finish” in South Korea and a commitment to explore manufacturing in that country.

The developer of the Pfizer vaccine, German company BioNTech, has agreements to develop facilities in Singapore and China, with both deals aiming for production in 2023.

Mr Hunt insisted on Sunday he could not have signed better deals with vaccine suppliers one year ago, such as an earlier deal with Pfizer when the company was reaching agreements with the US, the EU and the UK.

“There was no other deal available. So we are happy to receive any criticism for the things that we control, but that notion of another deal being available has been completely and comprehensively debunked,” he told the ABC’s Insiders program.

Pfizer and the government agreed last November on the supply of 10 million doses, which was upgraded to add 30 million doses in two deals in February and April.

Pfizer reached supply agreements with the US, the UK and Japan in July 2020, followed by Canada in August and the EU in September.

“There was no other deal available for any earlier vaccines or any larger quantities,” Mr Hunt said.

Labor health spokesman Mark Butler said the government had failed to secure the vaccine supplies the country needed in time.

“The truth is that [Prime Minister] Scott Morrison and his government deliberately adopted a so-called ‘wait and see’ strategy on vaccine procurement, which is why we’ve been so desperately short of Pfizer all year now,” Mr Butler said.