Who’s afraid of a scare campaign? Not Scott Morrison and Anthony Albanese.

In marginal seats on opposite sides of the country they ramped up their fearmongering about their rival, as they also accused each other of running scare campaigns. 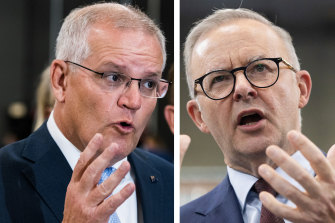 Both Scott Morrison and Anthony Albanese ramped up their fearmongering with scare campaigns.Credit:James Brickwood/Alex Ellinghausen

On the east coast, in the must-hold Brisbane seat of Griffith, Labor used an electric vehicle charger factory as its backdrop to accuse the Morrison government of igniting a “bin fire of lies” on power prices and renewable energy.

Across the Nullarbor, at a robotics factory in Perth, the prime minister laid into his opponent for peddling “despicable lies” to pensioners with baseless claims that their payments would be moved onto a cashless debit card.

Finding his footing after a stumbling start to the campaign, Albanese pitched Labor as the party of a future powered by “clean and cheap energy”, while reminding voters that it was Morrison who in 2019 said Labor’s electric vehicles policy would “end the weekend”.

“My opponent is running on fear and scare,” Albanese said, referring to reports in News Corp metro newspapers citing government modelling that alleged Labor’s energy plans would hike average power bills by $560 within a decade. The government’s modelling has not been released publicly. 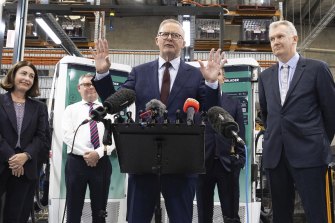 “Our modelling, very clearly out there, shows that households will benefit by $275 on average,” Albanese said.

“Angus Taylor has added fuel to the bin fire of lies that this government tells about renewable energy. These are dodgy numbers, from a dodgy minister in a dodgy government,” Chalmers said.

But moments later, the pair were on the defensive over Labor’s cashless debit card scare campaign, as they were pressed to explain why they were fuelling the spurious claim that the card would be extended to aged pensioners.

Albanese shuffled his papers before the waiting press pack to dig out the line by Social Services Minster Anne Ruston, who he noted said in 2020 the government was “seeking to put all income management on to the universal platform, which is the cashless debit card”.

The card, which has been trialled by the Department of Social Services in several regional locations, quarantines as much as 80 per cent of welfare recipients’ payments and cannot be used to purchase alcohol, to gamble, or to withdraw cash.

Income management is a specific kind of program operated by the department. Ruston, again this week, categorically ruled out the existence of any plans to extend the scheme to pensioners, saying: “We never have and we never will have a plan to force age pensioners onto the cashless debit card.”

Undeterred by this definitive denial, Chalmers noted Labor had promised to abolish the card entirely, whereas the government had not. 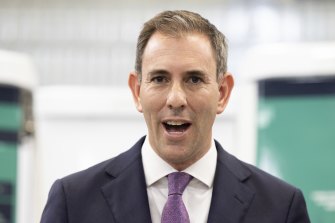 “If people want to ask the prime minister if he is serious about this, he will abolish the card. But he won’t,” Chalmers said.

In a barb almost Trumpian in vibe, Morrison labelled the would-be Treasurer “good old sneaky Jim”, as he fielded a question about electricity prices and pivoted to pensioners.

“He’s the one who’s been telling the lies. It was Jim Chalmers yesterday who was out peddling this lie seeking to scare pensioners,” Morrison said.

The Labor Party, he said, was “ringing up people, sending out brochures, writing to pensioners and scaring them, that there be some suggestion that our government would be applying the debit card to pensioners.”

“It is a scare campaign,” Yates said. “The minister’s assurances in writing as well as verbally and the Prime Minister’s office’s assurance to me have been unequivocal – it’s not being considered and it won’t be.”

Jacqueline Maley cuts through the noise of the federal election campaign with news, views and expert analysis. Sign up to our Australia Votes 2022 newsletter here.