Prime Minister Scott Morrison will propose a new and streamlined system of coronavirus relief to state and territory leaders that would see people receive payments from the second week of a lockdown.

Under the new arrangements, the payments would start when a lockdown goes into a second week but would also be backdated to cover the first week. 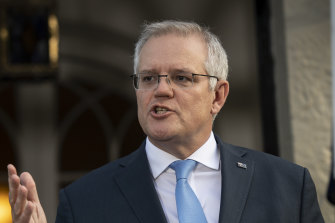 After 14 days of lockdown, business support in line with that announced earlier in the week would also kick in, with payments of between $1500 and $10,000 on offer.

Mr Morrison will ask national cabinet to agree to this new plan when it meets on Friday.

“We don’t want to see these lockdowns. We prefer they not happen,” Mr Morrison said. “It’s important we understand if these things become necessary, then Australians and Australian businesses have the confidence about what the arrangements will be.”

More than 50,000 applications for federal coronavirus disaster support have been denied or are being processed under the scheme as it stands as a result of rapidly shifting rules.

Only people who live or work or have visited a federally declared coronavirus hotspot are eligible, though the NSW government has extended the scheme at its own cost to the rest of the state from Sunday.

Confusion about the starting date of that extension is one factor in the number of claims that are yet to be processed or have been rejected, as the Sydney lockdown started with only a limited number of areas.

“Initially, seven local government areas [in Sydney] are only eligible [for the increased $600 payment] from today, and we have received some early claims before Sunday, which we are rejecting and we’re asking people to re-claim on Sunday,” Services Australia spokesman Hank Jongen told reporters in Canberra on Thursday.

From the start of the month until midnight on July 13, Services Australia figures show 210,875 claims were received while 159,282 claims were granted. That leaves 51,593 either rejected or still being processed.