Mother, 30, reveals a clever hack for getting rid of condensation on her windows – and it costs just 65p

A mother has revealed a simple and effective way to get rid of condensation on your windows which costs just 65p – and all you need is a common kitchen item.

Nazia Safa, 30, has discovered that leaving a bowl of salt on the windowsill overnight will stop moisture from seeping through the glass.

The tub of salt Nazia uses costs just 65p from supermarkets – and after sharing her simple trick on TikTok, she has inspired other people to give it a try.

The mother-of-three from London says her method is ‘very simple’ and can be left to do its thing without you needing to monitor it.

She said: ‘I think the salt absorbs the moisture. ‘You just put a little bit of salt in a bowl and leave it overnight.

‘You can see that the salt has moisture in it the next day, it’s very simple.

‘Condensation is a common problem in lots of homes.’ 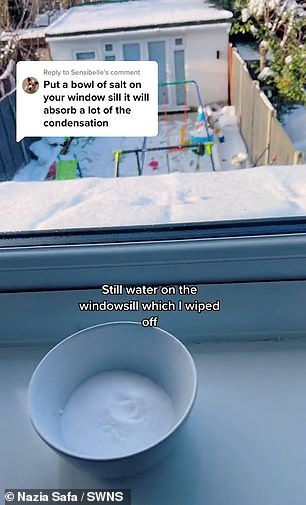 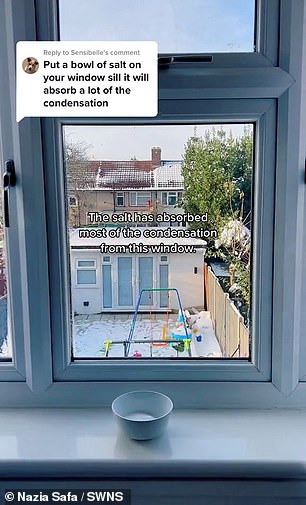 To reduce condensation on the window, Nadia Safa, 30, from London, left a bowl of salt on the windowsill overnight which absorbed excess moisture

Nazia added that she had originally tried to use washing up liquid on her windows but the water from the product ended up leaking into her windowsill.

As a busy mother, Nazia likes to find ways to get things done and tries out various ‘hacks’ and shortcuts to make her life easier.

‘Being a busy mum you want to try and avoid spending lots of time cleaning,’ she said.

‘I try and focus on preventive measures to avoid it.’

Nazia says opening the windows daily for a couple of hours, and wiping down the sills everyday can help stop condensation building up.

‘Condensation can lead to damp and mould,’ she said.

‘If you keep consistent and make these things part of your everyday it helps with condensation.’

The mum also opens her washing machine door and draw after every clean to stop any mould building up.

‘It takes a second to do and stops the mould.’ 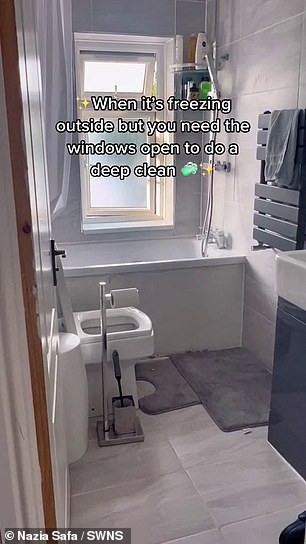 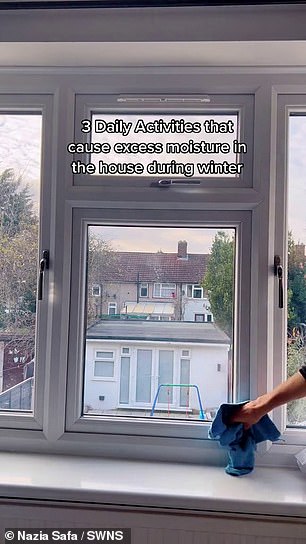 Nazia uses her TikTok channel to give people general tips and tricks about household chores, designed to make the lives of busy mothers a little bit easier

Nazia is one of many mothers who is taking to TikTok to share her tips and tricks for everyday household tasks.

A British mother who uses the handle @Capricesmum last week shared her ‘hack’ for unblocking the toilet using another product you’d find lying around the house – washing up liquid.

In order to demonstrate the effectiveness of her trick, the mother deliberately blocked her loo with toilet paper.

Then she revealed you need to get some washing up liquid and squirt some at the back of the toilet.

At the end of the video she is proven right after the toilet paper disappears and the toilet is once again unblocked.

The video, captioned ‘My brother taught me this & it works EVERYTIME’, has garnered more than eight million views and almost 3,000 likes.