A mum-of-six has been slammed online after revealing the four ‘weird’ rules she has in place for her family.

And she is the first to admit some of the rules seem a little strict: ‘Being a parent is weird, I never thought I would have a no singing rule.’

Sharon has laid down the law when it comes to ‘singing at the table’ and says it is ‘really annoying’ to be interrupted by someone breaking into song over dinner. 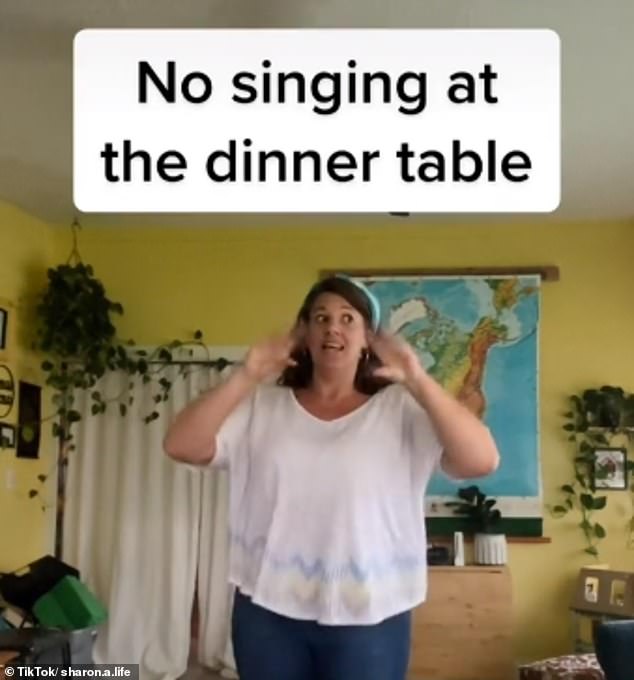 In a viral TikTok video the mum revealed she makes her children take ‘two years’ worth of piano lessons, doesn’t let them see friends on a Sunday and has banned home work.

She ends the video by suggesting people should simply ‘do what works for their families, and embrace it.’

There were no shortage of questions directed at the mother, who worked hard to respond quickly.

‘How do you get away with the no homework rule,’ one woman asked.

‘You can tell the teacher and school beginning of the year that your child will not be having homework sent home. Most states have that law in place,’ one woman said.

‘If homework is a regular thing for their teacher to give out, I email them and tell them we won’t be doing it,’ Sharon added.

Others asked about the ‘no singing rule’.

‘We had the rule when I was a kid and I didn’t understand it until I had kids,’ she said. 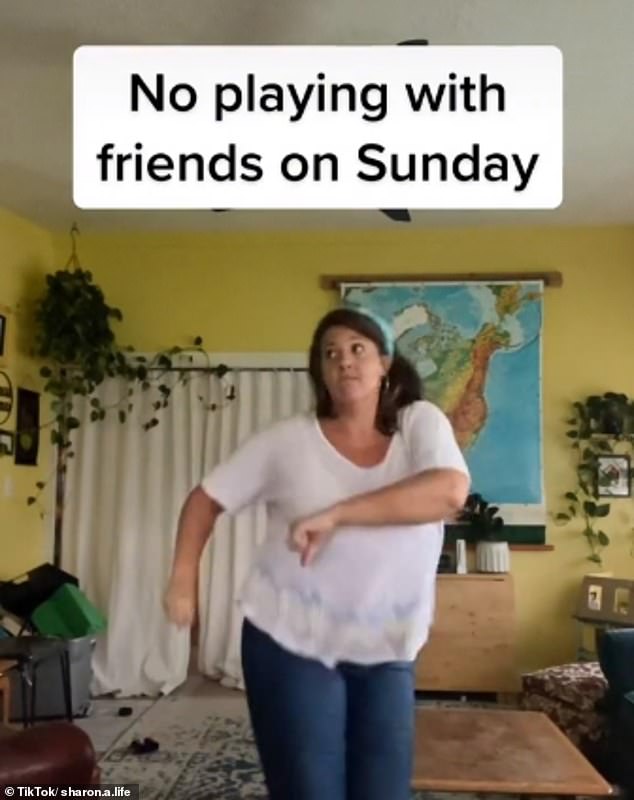 Sunday is family day, she explained, they have a big brunch and do something fun together

But it isn’t as ‘rare a rule’ as some thought.

‘No singing at the table was always a rule when I was a kid hahaha it’s a good one,’ one woman said.

What are Sharon’s four rules?

1 – Kids can’t see their friends on a Sunday

2 – No homework until Junior High

3 – No singing at the table

4 – Must do two years of piano lessons

‘My Dad had a no singing rule when we were younger.’ added another.

‘We don’t sing at the dinner table in Europe, it is called respect,’ one woman said.

Sharon also responded to direct criticism about the rules.

‘I will always find it rly weird to force kids to learn something even if they have no interest in it,’ one woman wrote.

To which Sharon responded: ‘It’s like math or reading. It’s a life skill that will serve them in one way or another down the line.’

‘Music is amazing! Knowing notes, beats, tones, patterns, rhythms, and it triggers another part of your brain!’

She said that piano lessons are more affordable, and as the family have a piano they are more accessible, which is why her children can’t choose an instrument.

‘I find number one (no friends on a Sunday) shocking,’ one woman said.

But Sharon stood by it.

‘It’s family day! We have a Giant brunch and go do something epic as a family.’

While others agreed with some of the rules.

‘I think these are all really good rules,’ added a second supporter.

But some people said they were ‘thankful for their mum’ labelling the rules ‘too much.

‘I don’t agree with any of these, but it is your family,’ one woman said.