REVEALED: The very simple trick for folding your bed linen into ‘space-saving’ sets – and it’s perfect for people with allergies

An organised mum has revealed her trick for folding bed linen into space-saving sets that can be neatly stowed away in the cupboard.

Chantel Mila, who posts under the name Mama Mila online, showed off her tip in a recent video after dozens of fans came to her for help.

‘As requested, here’s how to fold linen into space-saving sets,’ she wrote. 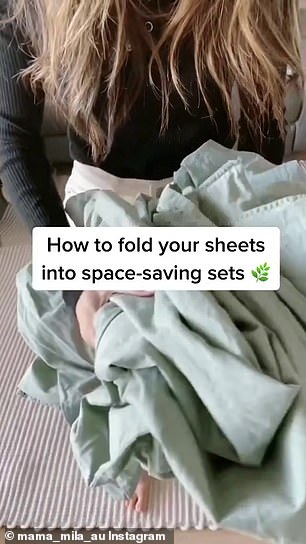 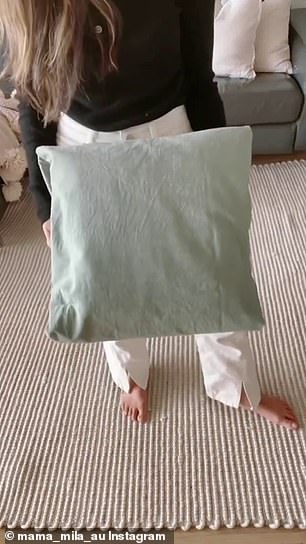 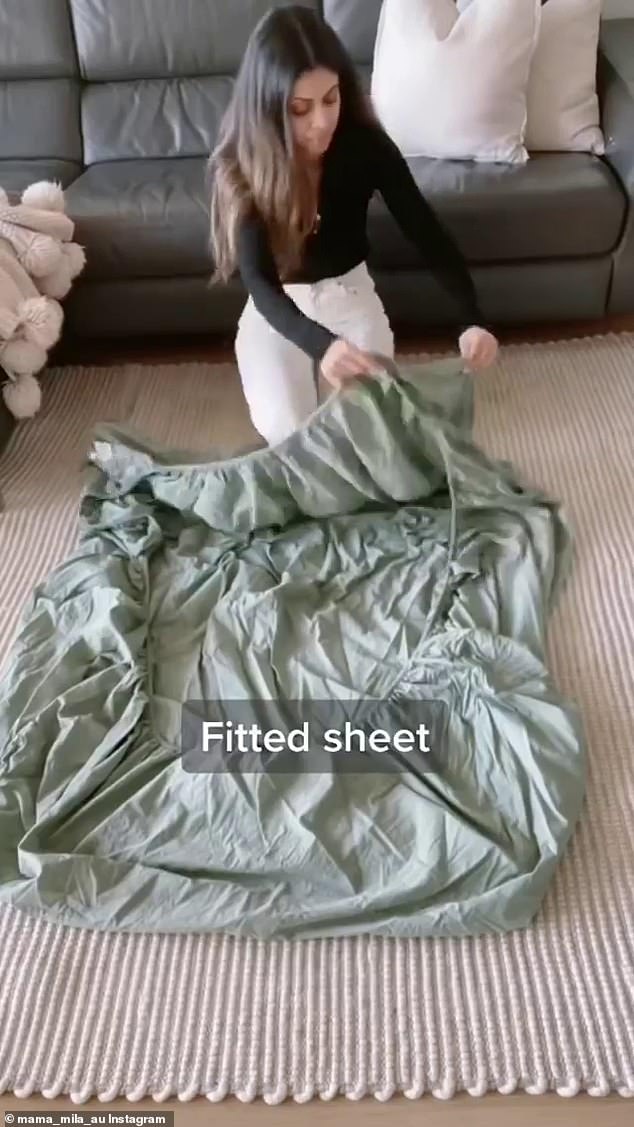 She revealed she uses the method because she doesn’t have a big enough linen closet.

‘It saves so much space, can be vertically stored and also protects your pillowcases against dust,’ she said.

This, she pointed out, is particularly good for allergy sufferers.

‘Reorganising your linen cupboard is such a perfect lockdown activity and it’s so satisfying once it’s done,’ she added.

The trick involves folding a whole sheet set into one tidy bundle, beginning with the fitted sheet.

Chantel is seen folding the fitted sheet into a square before setting it aside and working on the pillow cases. 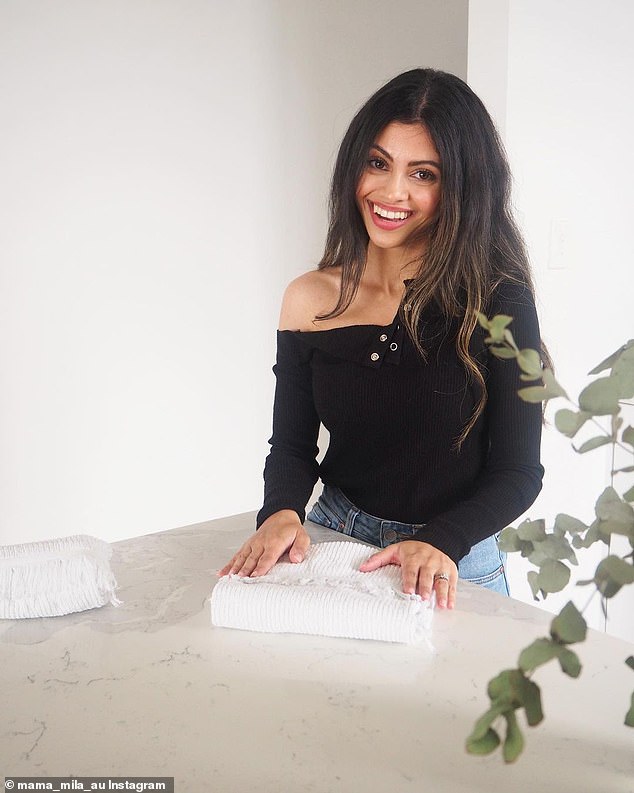 Chantel Mila, who posts under the name Mama Mila online, showed off her trick in a recent video after dozens of her fans came to her for help

She then folds the flat sheet into a large square before placing the other sheet and pillowcases on top.

She continues to fold around the bundle before tucking the flat sheet around to make the parcel of linen.

The busy mum then shows how neat and organised her linen closet is with each set tucked neatly together. 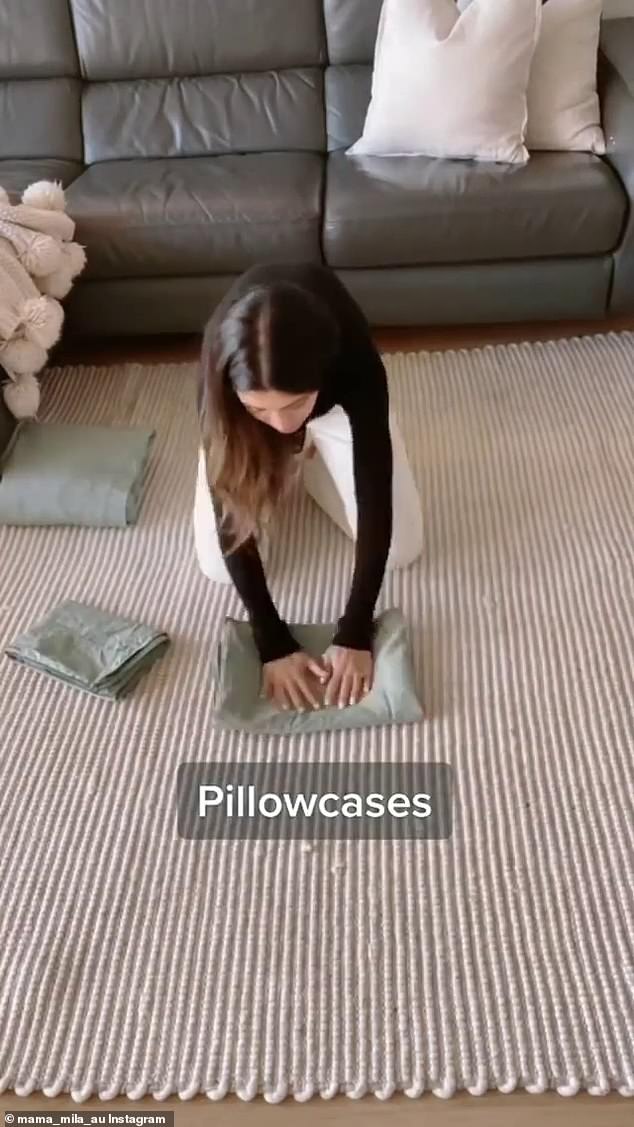 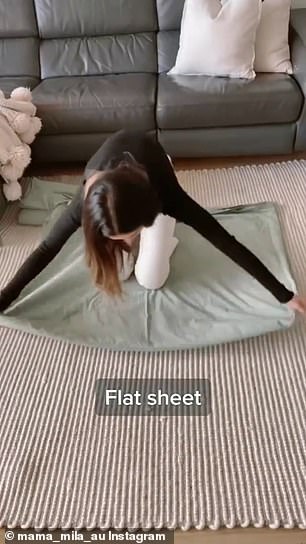 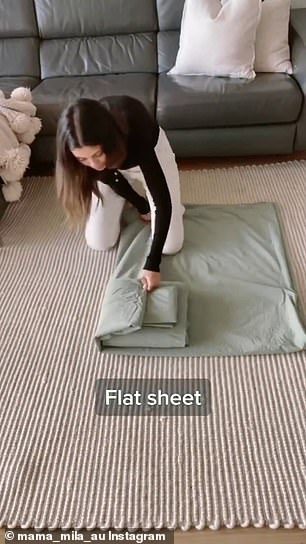 ‘Thankyou for sharing, I love your videos. But watching you fold them on the floor sends me through the roof,’ one woman said.

‘This is the best folding hack of sheets I have ever seen,’ wrote another.

‘Why are you so clever?’ another woman asked.

Others took a moment to share tips for people who don’t use a flat sheet at home.

‘This is great! For those of us who don’t use a top (flat) sheet, pop the folded fitted sheet and pillowcase into the second pillowcase and fold,’ one woman wrote.

Some were pleased to see their own method replicated in the post.

‘I fold exactly like this! I am so happy to see,’ one woman wrote.

While others said they would be using the method in the future.