Only a couple of episodes of Paramount’s 1923 have been screened so far, but – despite several clunky sequences and some uninspired direction (by cinematographer Ben Richardson) – they’ve already laid solid foundations for what’s to come. Ranchers have been pitched against sheep herders in the drought-stricken Montana heartland, their disagreements over land rights ironically set alongside the subjugation of Native Americans. And there’s also a different kind of trouble brewing on the dusty streets of the local town, the women of the local temperance group making their voices heard in the first episode as the errant menfolk soberly stride by.

Following the compelling 1883, 1923 is the second prequel to the hit series Yellowstone, which last week momentarily went into pause with the “mid-season finale” of its fifth season. And, if its predecessor can be called an old-fashioned wagon-train Western, 1923 might well turn out to be a latter-day range-war one.

Like 1883, it’s narrated by Elsa Dutton (Isabel May), poignantly reflecting from beyond the grave about the violence that has always haunted the Dutton clan. Providing a bridge between the two series, she points to the turmoil ahead as we’re introduced to her father’s brother, Jacob (Harrison Ford, playing his age, 80), his Irish-accented wife, Cara (Helen Mirren, playing hers, 77), and Elsa’s surviving brother, former soldier Spencer (Brandon Sklenar), a restless adventurer who also hunts big game on behalf of the British protectorate in East Africa. 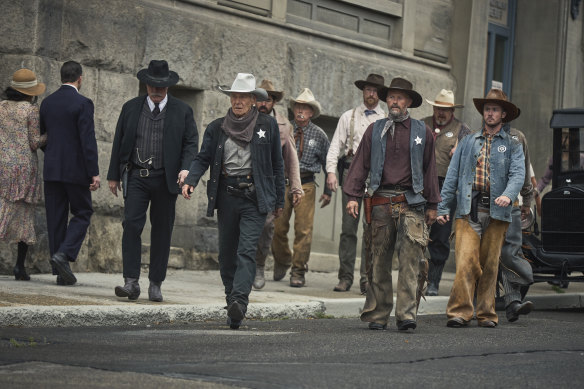 Harrison Ford as Jacob Dutton and James Badge Dale as John Dutton snr in a scene from 1923.Credit:Paramount+

Yet, as the series’ creator Taylor Sheridan observes, if a certain Home Box Office (HBO) senior vice-president had had his way when Sheridan originally pitched Yellowstone to the upmarket American network, none of them would ever have been made. “I had written two scripts for HBO,” Sheridan recalls. “But then I sat with him and he told me that they weren’t going to go forward with it. When I asked why, he said, ‘Nobody wants to see this. Nobody wants to see a show about this. The whole place should be a park.’”

He’s now a former HBO senior vice-president; Sheridan has become the creator of one of the most successful franchises in US television history; and Paramount is reaping the profits. 1923 is its latest by-product – there will be two eight-episode seasons – and its apparently indefatigable creator is already looking at two further Yellowstone prequels, one dealing with the Dutton family during the 1940s, the other set in the 1960s. Then there’s to be 6666, a Yellowstone spin-off about a Texas ranch where cowhands go to learn how to be real cowboys. And, in case you were wondering, there is a difference, one which Sheridan lovingly embraces.

He’s now been given carte blanche by Paramount. One of the reasons for his success is his skilful storytelling: most of the films and TV series he’s been involved with since Sicario (2015, Stan) and Hell or High Water (2016, Stan) set the ball rolling for him (he wrote both) rip right along. 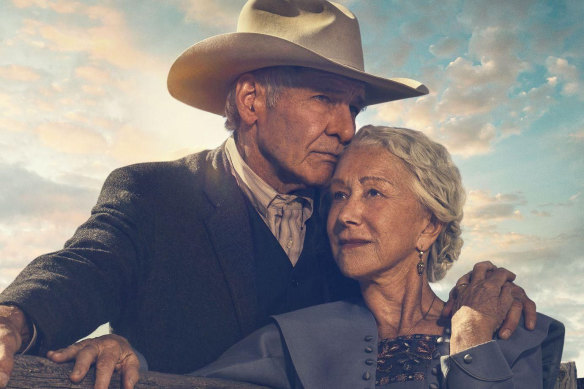 Harrison Ford as Jacob Dutton and Helen Mirren as Cara Dutton in 1923.Credit:Paramount+

With the epic he’s building around John Dutton (Kevin Costner), his troubled family and the Yellowstone ranch in Montana, he keeps us craving to find out what happens next. But he’s also shifting our attention to what happened beforehand. While building backstories for the current occupiers at Yellowstone, he’s both envisioning the kind of circumstances that might have shaped the Dutton mindset over the years and pondering the family’s place in the broad sweep of the times.

The notion that the past matters is elementary and, even before the prequels, Yellowstone has hinged on it, that series’ forward momentum frequently pausing to look back and discover how the present resonates with the tumult of the past. Flashbacks have regularly been attached to all of main characters. They punctuate the prequels too. Just as the characters are constantly looking back as they move forward, so too do the plots they’re part of.

Although Jacob is the least appealing of them, so far, the Dutton patriarchs in all three series are cast as bold pioneers paving a way to the future, building an empire as they go. But they’re also depicted as the human equivalents of snakes that have slithered into the Garden of Eden, unwelcome intruders who’ve asserted their ownership of the paradise that is Montana.

In 1883, it’s where Elsa and her pioneering family end up after their cross-country journey from Tennessee. In 1923, it’s where Jacob and Cara have made their home. In Yellowstone, it’s where the Duttons’ ranch sits uneasily alongside the Broken Rock Indian Reservation. And in all three, it’s a place where cultures intersect and sometimes collide.

From its opening season, Yellowstone cast Dutton and his offspring as ambiguous figures, Sheridan even likening them to the Corleones of The Godfather in the often-lethal manner in which they go about their business. That’s been softened a little as the founding series has developed, but it’s still part of who they are.

The Dutton patriarchs are also depicted as the human equivalents of snakes that have slithered into the Garden of Eden.

Brothers James (Tim McGraw) in 1883 and Jacob in 1923 go about their business in much the same way. They’re living in different times and they’re different from each other, but they’re all cut from the same cloth: they do what they need to do to get the job done, and they do it in the name of the land and their families.

James is a dreamer, a Texas-born man of the west, a leader who’s essentially decent but willing to bend the rules to suit his ends. Jacob is gruff and abrupt, a man who doesn’t do complicated, and a ruthless cattleman, as 1923’s sheep herders learn the hard way. Costner’s John in Yellowstone – James’s great-great-grandson and Jacob’s great-great-nephew – is a charismatic force with boss in his blood, a down-to-earth philosopher who’s also capable of being a killer (or at least ordering his underlings to do his dirty work). 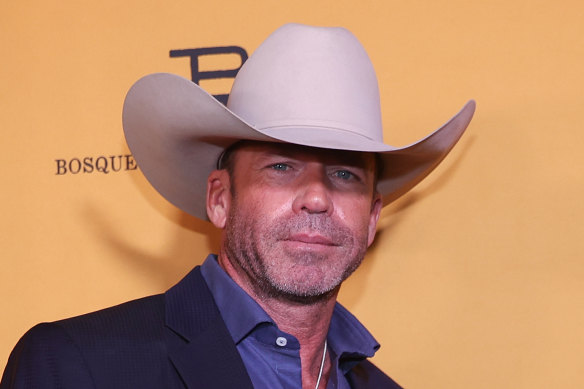 Series creator Taylor Sheridan at the Fort Worth premiere of Yellowstone’s fifth season.Credit:Getty

Beyond the individual characters, though, the Yellowstone saga tells a wider story, one fuelled by an air of melancholy and loss, to do with the changing face of America over the years. This story acknowledges the displacement of Native Americans and makes it clear why the Duttons can never be presented as anything other than ambiguous. 1883 brilliantly turns the cliche of whooping, bloodthirsty redskins on its head, also suggesting that the pale-faced trespassers on the land need to get their house in order.

By the time of 1923, though, that clearly hasn’t happened as, in the opening episode, a young Crow girl (Aminah Nieves) undergoes a series of brutal humiliations at the hands of the merciless Sister Mary (Jennifer Ehle) at a boarding school run by priests and nuns. Her name is Teonna Rainwater, perhaps making her an ancestor of Thomas Rainwater (Gil Birmingham), the chairman of the Confederated Tribes of Broken Rock in Yellowstone. Sister Mary’s sworn mission is “to kill the Indian” in her charges.

The injustices wrought upon Native Americans in the US have long been at the forefront of Sheridan’s thinking. He told an audience at the Cannes Film Festival in 2017, the year before the launch of Yellowstone, that “the manner in which my nation has treated the native inhabitants of North America is its great shame”. And Costner’s Dutton now finds himself the man in the middle, caught between the original owners of the land and the business interests from elsewhere which are threatening the empire his family has built across the generations.

When he talks with Monica (Kelsey Asbille), the young Native American woman who married his son Kayce (Luke Grimes), about the bad deal her people got after white settlement, he sagely reflects, “Nothin’ much has changed”. To which she replies, “Except you’re the Indian now.”

And if Crow elder Spotted Eagle (played by the imposing Graham Greene) has it right at the end of 1883, the Dutton empire’s days are numbered. “Know this,” he tells James. “In seven generations, my people will rise up and take the land back from you.” Monica and Kayce’s son Tate (a newborn in Yellowstone’s first season, and currently played by Brecken Merrill) is the first Dutton of that generation – signalling that the end might be approaching for the empire built by James, Jacob and John.