A 40st man who hit headlines last year when his personal trainer put posters up around his local area begging takeaway shops to stop serving him, is seen collapsing on the treadmill following a gruelling workout, in tonight’s ‘Eating Ourselves to Death’ on 5Star.

Darren ‘Dibsy’ McClintock, 27, from Middlesbrough, weighed more than 40 stone when he was told he needed to lose weight last year, in order to get a life-changing heart operation.

Darren, who now weighs 27 stone 1lb, goes from 40st 3lbs to 31st 1lbs during the documentary, which was filmed last year.

In the show, Darren, who appeared on This Morning in April with his slimmed-down frame, explains he’s always been on the heavy side due to his comfort eating and overeating. 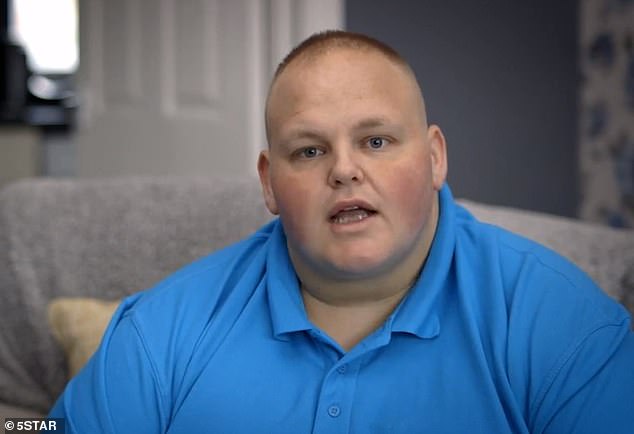 Darren ‘Dibsy’ McClintock who hit headlines last year when his personal trainer put posters up around his local area begging takeaway shops to stop serving him, is seen collapsing on the treadmill following a gruelling workout, in tonight’s ‘Eating Ourselves to Death’ on 5Star 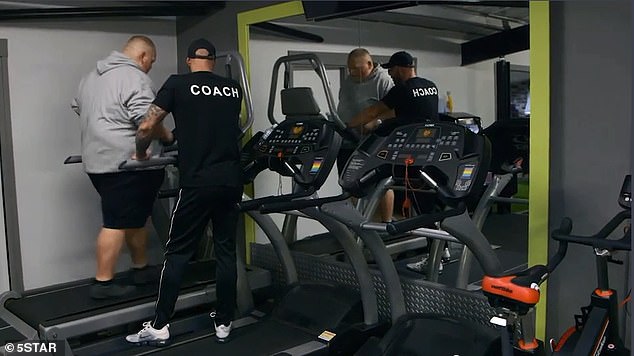 Darren ‘Dibsy’ McClintock, 27, from Middlesbrough, weighed more than 40 stone when he was told he needed to lose weight last year, in order to get a life-changing heart operation. He is seen taking part in a gruelling workout routine 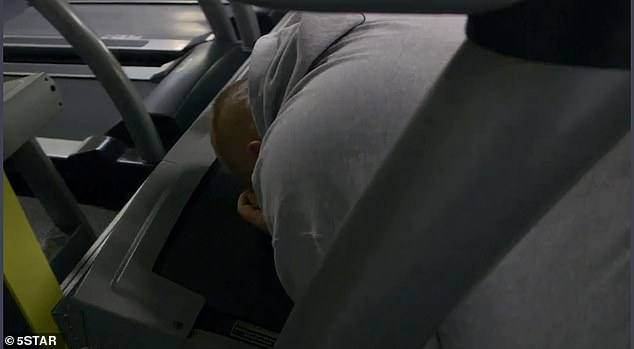 Darren, who now weighs 27 stone 1lb since filming the documentary last year, is seen collapsing with exhaustion during his workout

In the documentary, the young man explains his appetite can seldom be satisfied.

‘I just eat for the sake of eating, basically,’ he says, ‘It’s the one thing that makes me feel better about myself.’

‘In that moment, at that time, I felt happy, so that’s what I did,’ he says, adding he used to not be thinking of the effect his constant eating would have on his body.

Before, Darren would eat £11,000 calories a day, more than four times the recommended intake of 2500 for men.

Even he admits that the amount of food he used to ingest per day was ‘ridiculous.’ 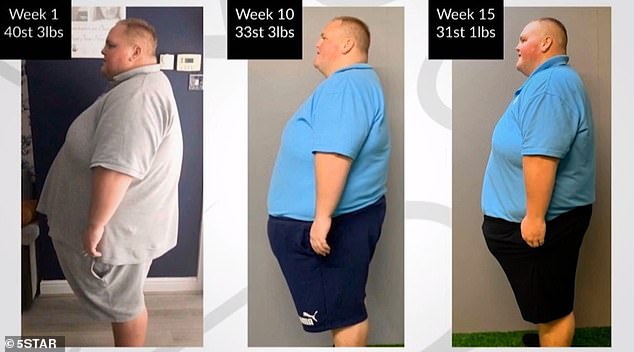 Darren, weighed 40st 1lbs at his heaviest. Three pictures show Darren’s progress during the first 15 weeks of his weight loss. 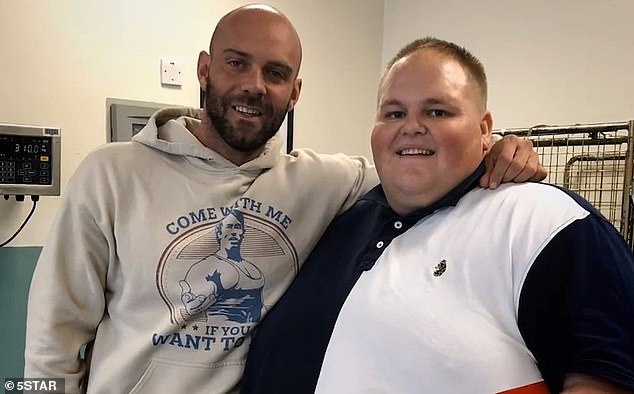 ‘I’d wake up in the morning it’d be like two sausage sandwiches, tea and biscuits, then a sandwiches and a pasty or a  pack of crisps, chocolate bar, bottle of pop,’

‘And it’d be eating every couple of hours,’ he goes on.

Even when his mother would cook him a healthy meal, Darren said it would not satisfy him more than three hours, after which he would already be thinking of his next takeaway.

However, the high-carb lifestyle has had a serious effects on Darren’s health.

‘I’ve got an irregular heartbeat, so my heartbeat’s fast,’ he explains. 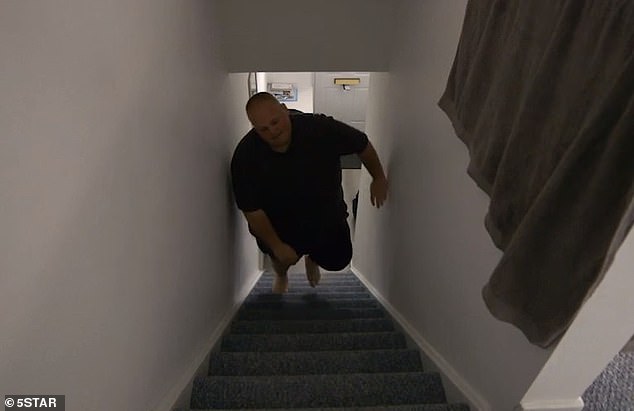 Darren (pictured) could no walk down three stairs steps without getting a cramp before his weight loss, he now has more mobility 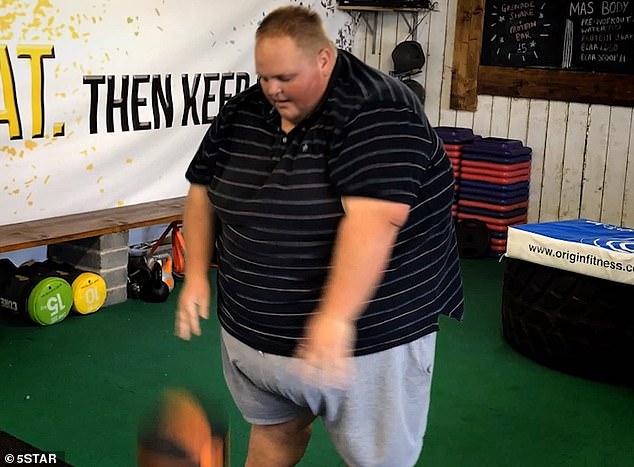 ‘And for someone my size to have something like this, isn’t healthy or safe.’

Darren reveals he is on the list for a heart surgery that would regulated his heartbeat. The procedure, called a cardio aversion would ‘reshape his heart into rhythm.’

Without the surgery,  Darren could die before he turns 40.

He says: ‘The doctor told me: ‘We’ve never had someone your size in this hospital with this problem, we don’t know how to treat you,” Darren adds.

Putting someone of Darren’s size under for heart surgery is extremely risky, and in order to reduce the risks of complications, he needs to lose ten pounds. 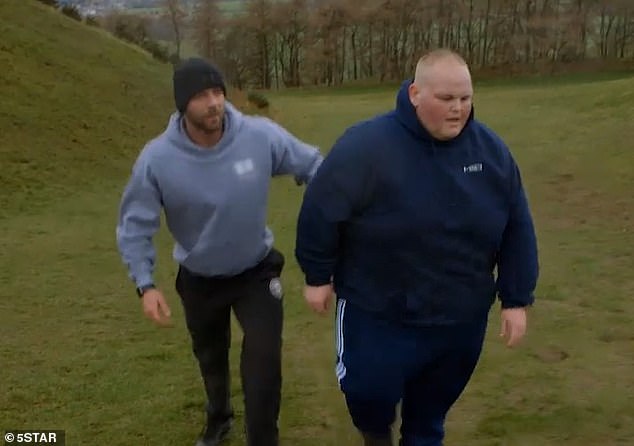 In the documentary, Mike and Darren walk up a hill together as part of his training before the heart surgery

Darren has enlisted the help of personal trainer Mike in order to shift the weight and go through with the surgery.

‘I went to his office, sat down with my mum, bared all to him and his team,’ he says.

Trainer Mike recalls in the documentary that Darren could barely take more than three steps in a row at the end of their initial meeting.

He says: ‘On the way out, you took three steps and got a cramp. I remember thinking to myself: ‘How on Earth am I going to get him to lose a target of 20 stone in the year when he can’t even walk three steps down the stairs without getting a cramp,’ he tells Darren. 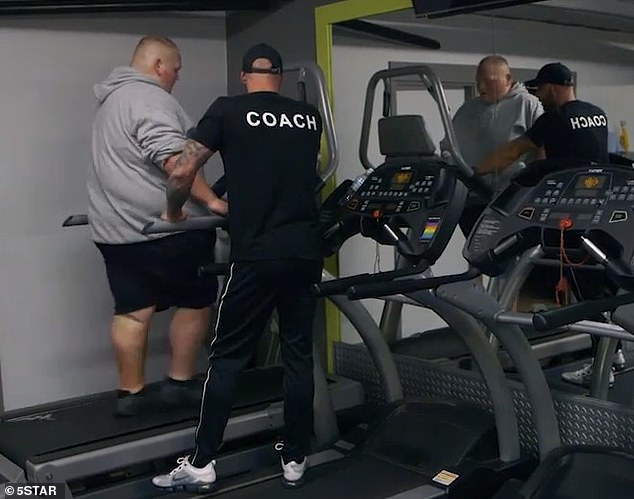 Thanks to his trainer Mike’s ‘tough love,’ Darren is now able to go an a treadmill and run at a slow pace in order to shift the weight

But in the documentary, about four months on, Darren has already lost nine stone, enough to make him illegible for the heart surgery.

When Mike took Darren on a fast walk for the first time, the young man could barely go further than 30 steps. Now, he goes on a treadmill and is able to run at a slow pace.

Before starting his diet, Darren would have the takeaways around his house sometimes twice daily.

The trainer had to enforce some tricks in order to keep Darren on the right path. He distributed flyers and alerted takeaways and food-stalls around so that they would not serve Darren anymore. 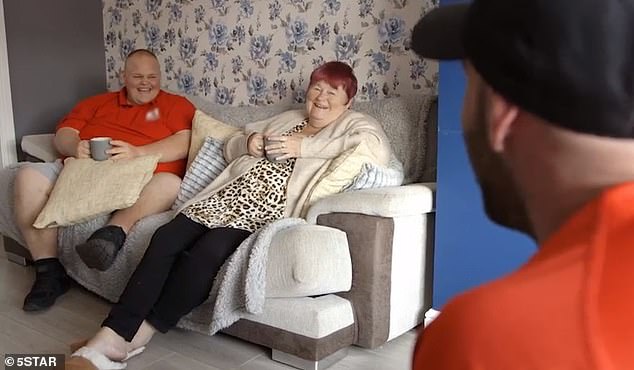 Darren after the operation, with his mother Susan, having a cup of tea at home with Mike. Susan says she used to worry about Darren’s size

‘Save Dibsy,’ the flyers read, ‘obesity is killing him, do not serve this man.’

‘I took the bold step of banning him from takeaways,’ Mike says, recounting how he went to every take away, asking them to put the sign up and not to serve him.

‘He needed to believe in himself and for so long, I think he lost that belief.’ 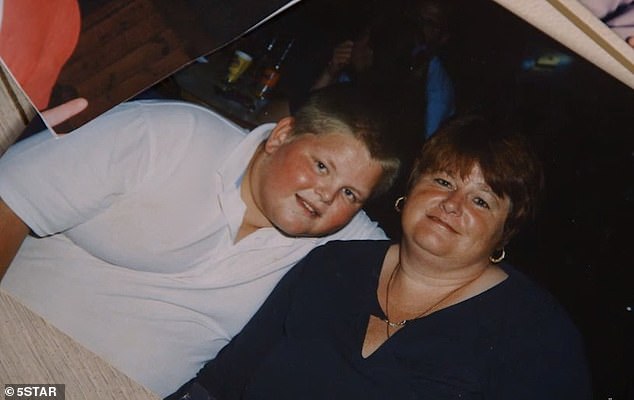 Pictured: Darren aged 12 with Susan. The mother-of-three would have anxiety because of her son’s poor health

Darren cut down to 3,000 calories a day and says he gets a sense of accomplishment from his workouts, saying it makes him think: ‘yeah, I’ve done good there, I’ve done my best, I’ve given my whole.’

During the documentary Darren manages to lose over 11 stone and discovers that he can go through with the operation, heading to the James Cook University Hospital.

‘I’m worried about getting the procedure done, because, someone my size being put to sleep isn’t good,’ he says, right before the operation.

After the operation, a triumphant Darren returns to his mother’s home.

Through an update at the end of the documentary, we learn that Darren has kept with his weight loss and has now lost 14 stone in total, weighing just over 27 stone.

Eating Ourselves to Death aired tonight at 9pm on 5Star. 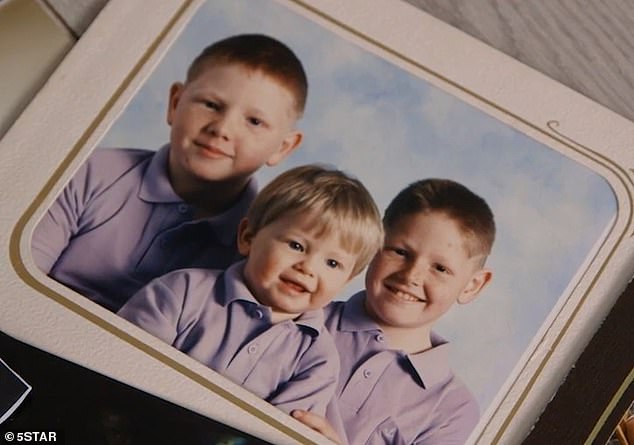 Darren as a toddler with his brothers. The young man used to be bullied at school and would come home sad

Thomas Markle: I Leaked Meghan’s Letter for Her Own Good!!
We and our partners use cookies on this site to improve our service, perform analytics, personalize advertising, measure advertising performance, and remember website preferences.Ok