Earlier in the day, Premier Daniel Andrews responded to criticism from the president of the Victorian Bar, saying the claim by Christopher Blanden, QC, that the government had not properly consulted the body about the legislation was “factually wrong”. 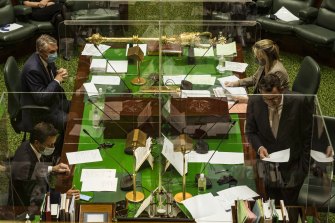 The government’s proposed pandemic legislation will replace state of emergency powers that expire on December 15, curtail the chief health officer’s powers, give the premier the authority to declare a pandemic and the health minister the role of making public health orders.

The opposition, many crossbench MPs, and legal groups have raised concerns about various aspects of the legislation, including what they say is a lack of checks and balances on the government’s powers.

Mr Blanden on Wednesday described the proposed laws as “appalling” and claimed the government had “grossly misrepresented” its consultation with the Victorian Bar.

He said the Department of Health officials conducted a 45-minute online meeting with him to discuss the issue of whether the chief health officer should retain the authority to declare a pandemic.

The upper house will debate the bill in Parliament in three weeks and it is likely to pass with the approval of Samantha Ratnam, Fiona Patten and Andy Meddick, who were involved in negotiations over the legislation.

They were poring over the legislation this week and are yet to make a decision on what, if any, amendments they would introduce. However, there could be appetite among crossbench MPs to demand a parliamentary committee, in addition to the independent advisory committee, to scrutinise government decisions.

Opposition Leader Matthew Guy told Parliament on Thursday he would repeal the law if the Coalition is elected next year, accusing the government of being “megalomaniacs” who “trash” democracy and the separation of powers.

“This bill enables an Australian government in a state, one of our six states, to rule by decree with no oversight,” Mr Guy said. “Except one or two individuals appointed by themselves, it allows them to rule by decree. It would not be, I think, something that any Australian 50 years ago would ever have imagined.”

Industry Support and Recovery Minister Martin Pakula was the most senior government minister to speak on the bill in Parliament on Thursday. He accused the opposition of dramatising its response.

“Do they, for instance, seriously suggest that you should not have an ability in a pandemic to have public health directions which limit movement?

“Do they seriously suggest that we should not be able to ensure that, for people who are COVID positive or positive with any other pandemic illness that might occur in the future, we have an ability to have an order that says that they need to stay home? Because that is one of the things that apparently is now being described as draconian, undemocratic, Russian.”