PETER OBORNE: Jeremy Hunt is the PM contender who WON’T slip on a banana skin…but Boris Johnson might

Most political observers think it’s all over bar the shouting. Boris Johnson is a stone cold certainty to be Tory leader and Prime Minister by this time next month.

And, yes, it may well happen — although the likelihood certainly hasn’t been enhanced by the fact that police were called after he rowed with his girlfriend at her flat in the early hours of yesterday morning.

Johnson secured a substantial majority of support among Tory MPs in this week’s votes. It’s well known that he has a huge fanbase among the Tory grassroots who will choose the winner of the final stage of the contest. 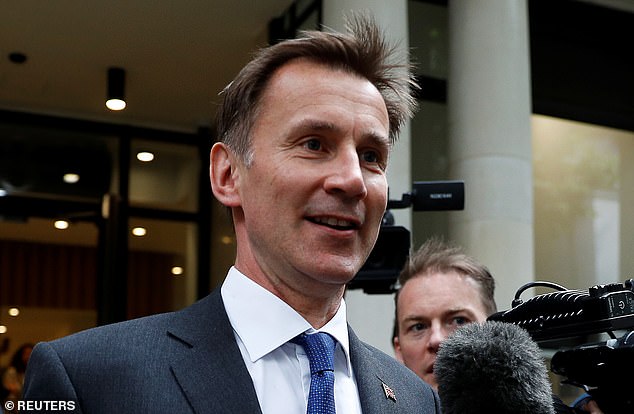 When Prime Minister Theresa May reshuffled her Cabinet in January last year, Hunt’s tenure in the job appeared to be numbered. However, he emerged from a private meeting at Downing Street still in his job and with more power — social care had been added to his responsibilities

But I say this: don’t write off Jeremy Hunt (pictured) just yet. Johnson’s rival has enormous strengths.

Physically, he looks somewhat slight alongside even a newly-slimmed down Boris. But personally and politically, he’s a formidable figure with a huge record of achievement.

Indeed, he has a far more impressive record as a Government minister than does Johnson, and I believe he could make an outstanding Prime Minister.

First and foremost, Hunt was one of Britain’s best ever health secretaries. 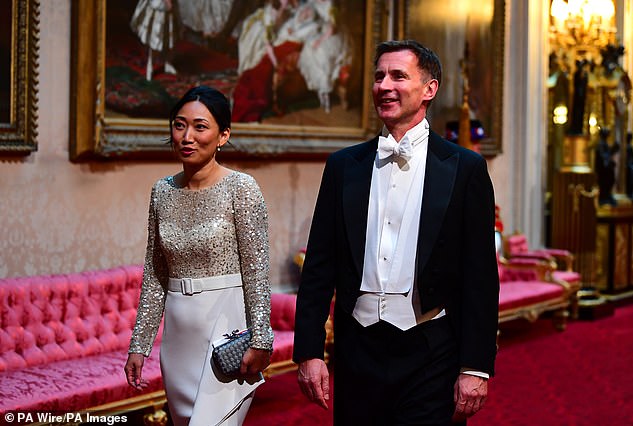 Jeremy Hunt and his wife Lucia are pictured arriving at a state banquet at Buckingham Palace earlier this month. In the traditional Tory Party, Hunt would be out-and-out favourite. He is a traditional, pragmatic, serious-minded Tory

This is usually a graveyard job for ambitious Tories. Hunt, by contrast, made a remarkable success of it, throwing himself life and soul into the job, and describing the NHS as ‘bloody brilliant’. His enthusiasm was palpable.

He was rarely seen without the NHS logo pinned to his lapel and determined to learn about life on the frontline. He was a regular ‘undercover’ visitor to hospitals where he would shadow staff and investigate patient complaints.

He also refused to be pushed around by the British Medical Association. Many of his predecessors have run scared of offending the liberal Left media which sees itself as the guardian angel of the NHS, and they have simply rolled over in the face of difficulty. 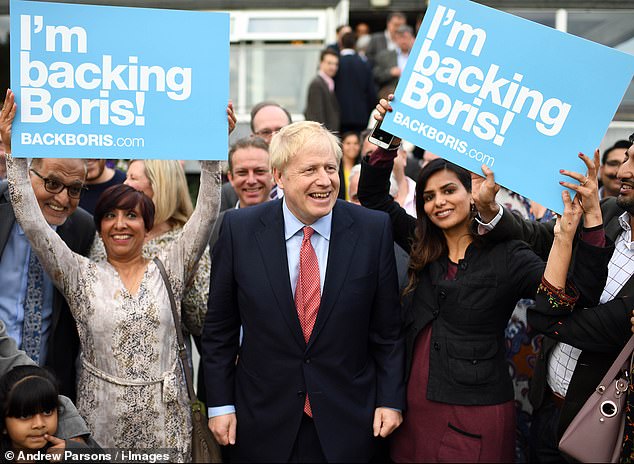 Johnson secured a substantial majority of support among Tory MPs in this week’s votes. It’s well known that he has a huge fanbase among the Tory grassroots who will choose the winner of the final stage of the contest

This was not the case with Hunt. He launched himself into fighting tough but necessary battles. No praise, for example, could be too high for the way he handled the junior doctors’ strike in 2016.

By trying to make the NHS a truly seven-day service (which required a change of contracts for doctors), Hunt became the bête noire of the medical profession up and down the country.

And he was heavily criticised for refusing to relent when the BMA decided to take industrial action. For two days that April, junior doctors even stopped providing emergency care, the first time in the history of the NHS.

Hunt held firm and got his way, in the end imposing a new contract on junior doctors.

Those who attacked him for the long waiting times and chaotic scenes of patients on trolleys in A&E refused to acknowledge that these were problems caused by factors outside his control.

Demands on the NHS had never been higher — and Hunt was in charge during an age of austerity.

Despite this, he survived in the job for six years, becoming the longest serving Health Secretary of all time. And his legacy was securing a £20 billion funding boost for the NHS before he left.

This longevity required not just management skills, but also a great deal of political nous. 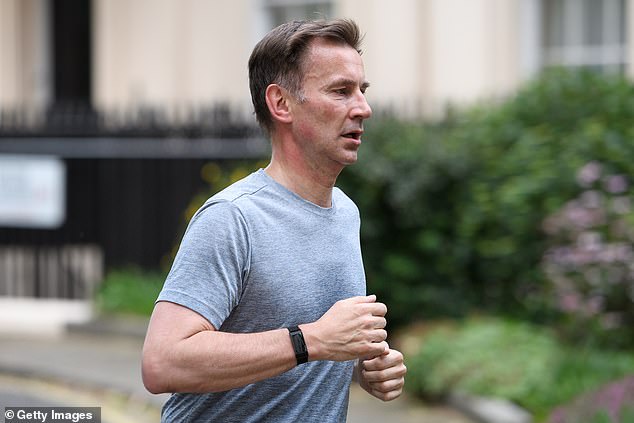 There’s still a month to go before the Tory Party reaches its decision. In that time, I think Jeremy Hunt is far less likely to slip on a banana skin than his charismatic blond opponent

When Prime Minister Theresa May reshuffled her Cabinet in January last year, Hunt’s tenure in the job appeared to be numbered.

However, he emerged from a private meeting at Downing Street still in his job and with more power — social care had been added to his responsibilities.

Let us now turn to his record as Foreign Secretary, the role Hunt took up in July last year after the resignation of his rival for the Tory leadership. Compared with Johnson, it looks very good indeed.

Johnson was Foreign Secretary during the genocide of the Rohingya people of Myanmar.

During this time, Britain was the so-called ‘pen holder’ on Myanmar (former Burma) at the United Nations Security Council, meaning we had the most power of any country to control what the UN said or did.

Shamefully, Britain sat on its hands, frightened of offending Aung San Suu Kyi, the civilian leader of Myanmar who had once been such a darling of the West but whose troops were implicated in the atrocities. We resisted calls for an independent investigation into war crimes. Instead, we encouraged Suu Kyi to carry out her own investigation.

Hunt has already shown himself to be much more energetic, pressing Suu Kyi to make sure her armed forces are held accountable. He also pleaded with her to release two journalists from news agency Reuters who were jailed for uncovering massacres of Rohingyas. The journalists were freed last month.

Now consider Johnson’s failure to win the freedom of Nazanin Zaghari-Ratcliffe, the British-Iranian woman held in Iran since 2016 on spying charges. Her husband, Richard Ratcliffe, says that Hunt has been a great deal more help than Johnson.

There is also much to admire in Hunt’s record before entering politics. He had a stuttering start, with three businesses which failed, before launching Hotcourses, a hugely successful online educational publishing business.

Some of the profits went to support a charity helping Aids orphans in Africa. Hotcourses was sold for £30 million — his share was £15 million — in 2017 which made him the richest member of the Cabinet.

I fear arming Saudis is a stain on our history

When I was at school, we were taught in history lessons about Britain’s shameful failure to take a stand against fascism in the Spanish Civil War of the 1930s.

I believe that future generations will look back with equal horror at our role in the Saudi bombing of Yemen over the past five years.

Britain has continued to supply arms and military assistance to the House of Saud while it has pursued a murderous policy of destroying the lives and livelihoods of thousands of innocent Yemeni people.

On Thursday, the Court of Appeal ruled in a landmark decision that Britain’s supply of arms to Saudi Arabia was not just immoral, but illegal.

It’s an episode that exposes Britain as not just heartless, but hypocritical.

Our protestations of horror against the atrocities of the Assad regime in Damascus carry no weight at all, given our readiness to stand idly by while nearby the Saudis inflict such bloodshed in the Yemen.

According to conventional wisdom, the fact that Hunt was a Remainer will count against him in the final vote. But is that true?

Many Tory voters, like Hunt, supported Remain and accept the referendum result. Again, like Hunt, they are realistic and simply want the best possible Brexit now.

His position — he’s been derided for flip-flopping from Remain to Leave to serve his political ambitions — will give them comfort.

Conventional wisdom also insists that Johnson would have a better chance than Hunt of defeating Corbyn.

I would counter that and argue that Hunt stands far more chance than Johnson of picking up the middle ground voters who typically decide general elections.

In the traditional Tory Party, Hunt would be out-and-out favourite. He is a traditional, pragmatic, serious-minded Tory. He has been a huge asset and source of stability in the administrations of both Theresa May and her predecessor, David Cameron.

He may not have the box office appeal of the all-singing, all-dancing BoJo. But that’s no bad thing.

Yes, his is a low octane approach to politics and his affable management consultancy style might be considered a tad dull, but there is depth and breadth there.

There’s still a month to go before the Tory Party reaches its decision. In that time, I think Jeremy Hunt is far less likely to slip on a banana skin than his charismatic blond opponent.

Last month, Theresa May, acting on the advice of her senior officials, sacked Defence Secretary Gavin Williamson from the Cabinet for allegedly leaking details of secret conversations at the National Security Council.

Now the disgraced former minister has emerged as the chief organiser for Boris Johnson’s leadership campaign.

He joins a team which also includes the former Tory chairman Grant Shapps, who was once accused of editing his own Wikipedia page and those of Tory rivals and political opponents.

He resigned from the Government in 2015 amid allegations he had ignored warnings about bullying of junior Conservative staff.

If, as it is said, you can judge a man by his friends, then Boris Johnson’s decision to surround himself with such politicians is worrying.