I despair that this is her ‘golden years’: Homeless charity shares heartbreaking image of an elderly woman eating her dinner from a plastic bowl on a window sill in Dublin

A photograph of a elderly woman eating alone from a plastic container using the window sill of a shop as a table has sparked outrage online.

The image shows the woman eating alone on a dark Grafton Street after accepting a food donation from Dublin charity The Homeless Street Cafe, lit only by the electricity of a business on the Irish capital’s main shopping street.

It was shared by the charity on its Facebook page, who called the current state of homelessness in the Republic of Ireland as ‘beyond crisis’.

A spokesperson said that they watch the elderly woman eat her meal from a plastic bowl on a window sill every week, adding: ‘I despair that this is her “golden years”.’ 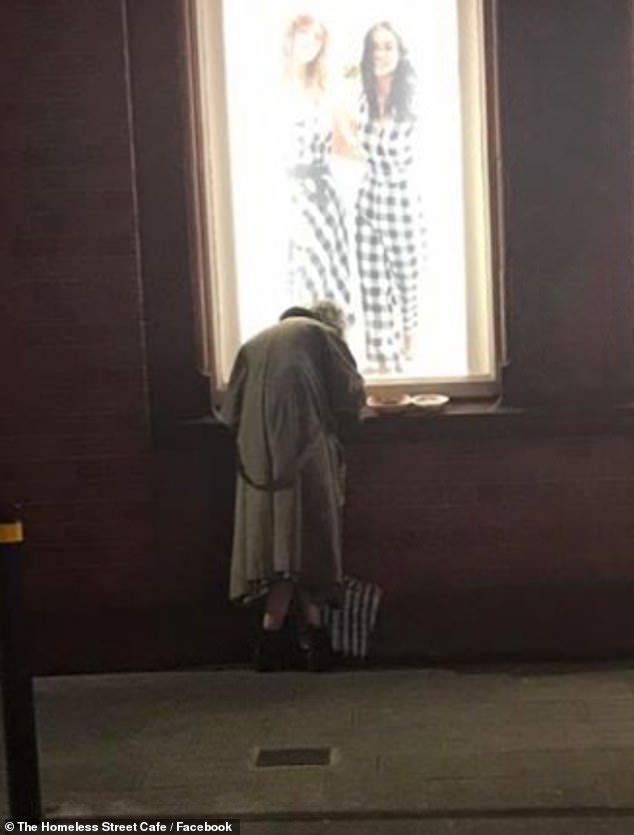 The image shows the woman eating alone on a dark Grafton Street after accepting a food donation from Dublin charity The Homeless Street Cafe, lit only by a shop window

The small charity’s spokesperson also called for Irish people to bear the image in mind when they go to the polls for a general election on February 8th.

They added that while the night had been a ‘successful’ one for the charity – handing out food, clothes, toiletries and even treats to everyone who came – ‘even on your best night it’s nothing but a plaster or a band-aid on what is just a horrific wound.’

‘This issue is beyond crisis. People always want to talk to us about the children we meet and how sad that is. If I’m honest I find the older generation that use our service even more heartbreaking,’ the post continued.

‘It seems there is no time left for change for them, a dearth of hope really. To be living in food or heat poverty at their age, relying on a soup kitchen for necessities is horrifying to witness.’ 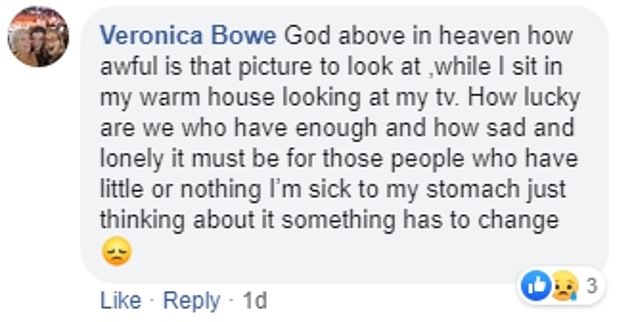 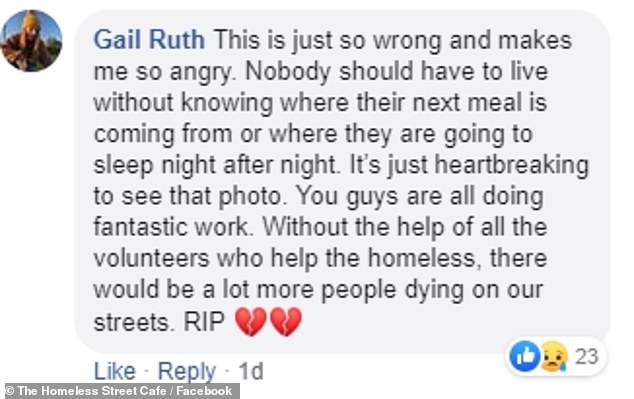 In reaction, one woman wrote: ‘ What a world we live in, how did it come to this, that poor woman,’ while another added: ‘This is just so wrong and makes me so angry’

The post also turned attention towards a homeless man left with life-threatening injuries on Tuesday after the tent he was sleeping in was removed by an industrial vehicle in ‘an attempt to tidy the canal walkway’ in Dublin.

‘The indignity of it all. We are all saddened but unfortunately not surprised,’ the post read, wrongly stating that the man had died before an update reflected that he is still alive, but in a serious yet stable condition.

In reaction, one woman wrote: ‘ What a world we live in, how did it come to this, that poor woman,’ while another added: ‘This is just so wrong and makes me so angry. Nobody should have to live without knowing where their next meal is coming from or where they are going to sleep night after night. It’s just heartbreaking to see that photo.’ 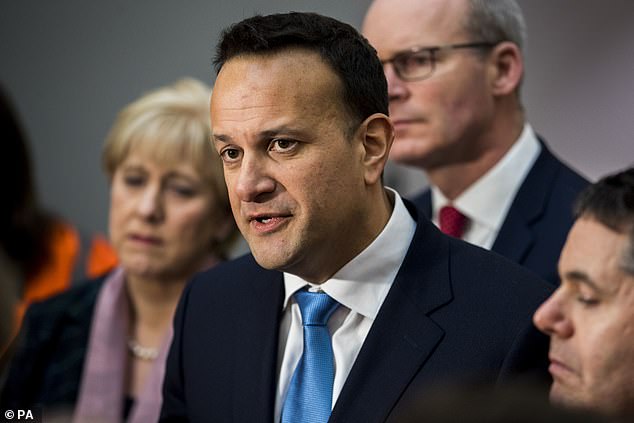 Following the incident with the man who was injured on the canal, Fine Gael leader Leo Varadkar said he was ‘very concerned’ about the situation

A third person said: ‘How lucky are we who have enough and how sad and lonely it must be for those people who have little or nothing I’m sick to my stomach just thinking about it something has to change.’

The post ended: ‘Please vote with these people in mind on the 8th, the current government has failed miserably while claiming to be successful, time for radical change!’

A second charity, Feed Our Homeless, urged the Irish government to declare a state of emergency after they were overwhelmed by what they called ‘unprecedented demand’.

The charity soup kitchen dealt with record crowds of 650 people on Sunday and had to stop its service half way through their usual time frame. 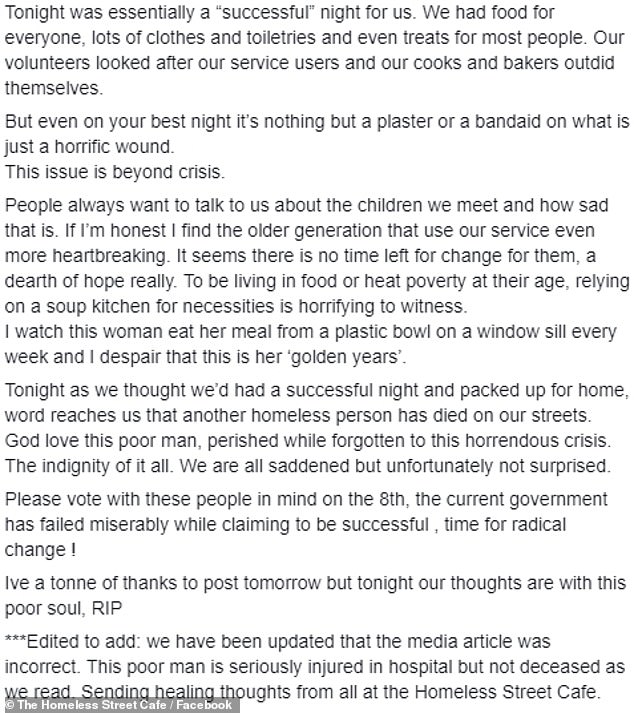 The spokesperson said that they watch the elder woman eat her meal from a plastic bowl on a window sill every week, ‘and I despair that this is her “golden years”‘

The Dublin organisation offers food, hot drinks and clothing to adults and kids in emergency accommodation and rough sleepers from 7pm until 10.30pm but had to shut up shop by 9pm on Sunday.

Chief Tony Walsh said he went back to charity partner Tesco twice and received a further 40 tins of soup which were snapped up immediately.

He said ‘a large number of elderly people and several young kids’ were among the crowds. 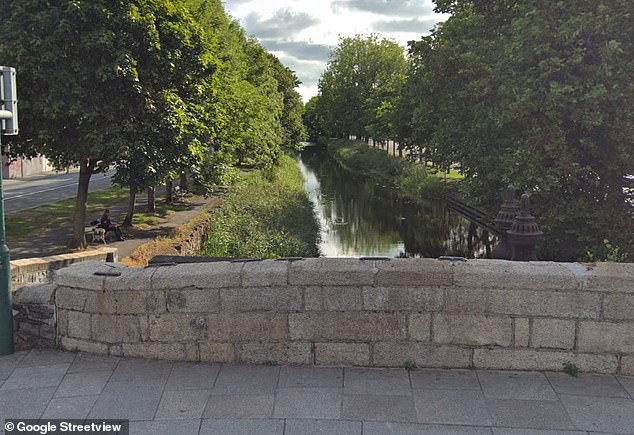 Ireland has been under the leadership of independent politician Michael D. Higgins since 2011.

On the steps of Government Buildings in Dublin on the same day the homeless man was hospitalised, Taoiseach (Irish PM) Leo Varadkar said that the nation ‘have every reason to be hopeful and positive about the future.’

Beforehand, he said ‘incomes are rising and poverty is falling’ but Sinn Féin’s David Cullinane said that Varadkar’s Fine Gael party had overseen ‘failures’ in housing and health and public services.

A report from November 2019 suggested that over 10,000 people are homeless in Ireland with over 4,500 in Dublin alone.

Fran Drescher Has Friend With Benefits Arrangement to Keep Her Going

The one with all the Friends’ throwbacks as Courteney Cox and Jennifer Aniston get nostalgic
We and our partners use cookies on this site to improve our service, perform analytics, personalize advertising, measure advertising performance, and remember website preferences.Ok