Police could become the next workforce in Victoria asked to get vaccinated in order to continue working, as protesters hit Melbourne’s streets for a fourth day on Thursday.

Chief Commissioner Shane Patton revealed he was “seriously considering” mandatory vaccination for all police members given their engagement with the public and it was “probably the appropriate way to go”. 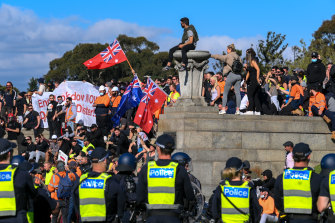 Protesters at the Shrine of Remembrance on Wednesday.Credit:Eddie Jim

Given the engagement with the public that police have in terms of working in hotel quarantine, on borders and various other secnarios, Mr Patton said, “It’s something I’m seriously considering”.

“The final determination hasn’t been made but that’s where I’m heading towards.”

Mr Patton said one protester bit a police officer in Wednesday’s protest and with very few protesters wearing masks, he said police were routinely exposed to the risk of COVID-19 at demonstrations. 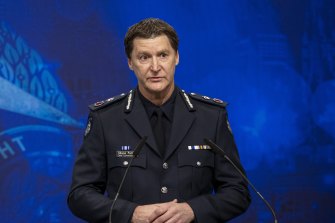 On Thursday, bus loads of uniformed police officers arrived from about 9am at the boarded-up construction union offices on Elizabeth Street, where protests have started every day since Monday.

But organisers in social media channels advised attendees to meet on the outskirts of the CBD about 10am on Thursday and await further instructions, avoiding confrontations at the CFMEU office or at Flinders Street Station where police have been deployed.

As part of what Mr Patton described as new tactics, police attempted to intercept and arrest protesters before the march began on Wednesday. They appear to have used the same approach on Thursday, tackling one man to the ground and arresting him about 9.30am.

The protests began on Monday in opposition to a series of additional coronavirus regulations imposed on the construction industry by the state government, including a vaccine mandate and the closure of tea rooms.

The make-up of the group, which police estimated was between 300 and 400 on Wednesday, has been a topic of conjecture this week: while construction union boss John Setka said the large majority were anti-vaccination “drunken morons” rather than tradespeople, others in the union believe CFMEU members have been out in force. 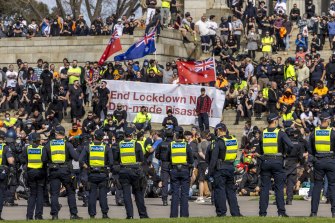 Police and protesters were engaged in a stand-off that lasted almost three hours on Wednesday.Credit:Wayne Taylor

A vaccination hub for vulnerable Melburnians including asylum seekers and rough sleepers at Town Hall was closed on Thursday morning because of dangerous protests in the CBD.

Community health centre cohealth has shut the vaccination hub until at least Monday to ensure the safety of clients and staff during the “disruptive demonstration” following abuse directed at health workers.

Most of Wednesday’s protests – slammed by the construction union as “mindless and destructive mob actions” – played out at the Shrine of Remembrance in a stand-off between protesters and police that lasted almost three hours from 2pm.

Amid chants of “freedom” and “every day”, the crowd was urged to leave peacefully via St Kilda Road. By about 4.45pm, when the group had thinned to less than half its original size, police deployed tear gas and non-lethal rounds that dispersed those remaining.

Shrine of Remembrance chief executive Dean Lee revealed there was urine on walls, widespread rubbish and shattered glass in a “disgusting” display. Permanent damage to the Shrine was avoided, however.

“Those that seek to divide us in a time of crisis are not doing themselves any favours and are not representing the best values of what it is to be Australian,” he ABC News Breakfast

CFMEU national construction secretary Dave Noonan condemned the protestors’ use of the Shrine of Remembrance, built in 1934 to commemorate those who served and died in Australia’s wars.

“These actions are not supported by the vast majority of union members in the construction industry nor the Australian community,” Mr Noonan said.

“Those who occupied the Shrine should be ashamed of themselves. They should reflect on the sacrifices of others and cease these mindless and destructive mob actions.”