A pregnant woman has gone viral on social media after claiming a Starbucks barista  changed her order to a decaffeinated drink without discussing it with her first.

Madeline Odent, who lives in Oxford, took to Twitter venting the frustration of having strangers making decisions on her behalf once they notice her baby bump after being given decaf coffee.

The expectant mother claimed she ordered a frappé becauase caffeine keeps her blood pressure at a ‘functioning level’, however she was forced to wait for her drink to be remade because the employee gave her a decaffeinated beverage.

Many responses to the post came from women claiming they had similar issues with people trying to impose their beliefs throughout pregnancy, while others argued the barrister may have made a mistake with the drink. 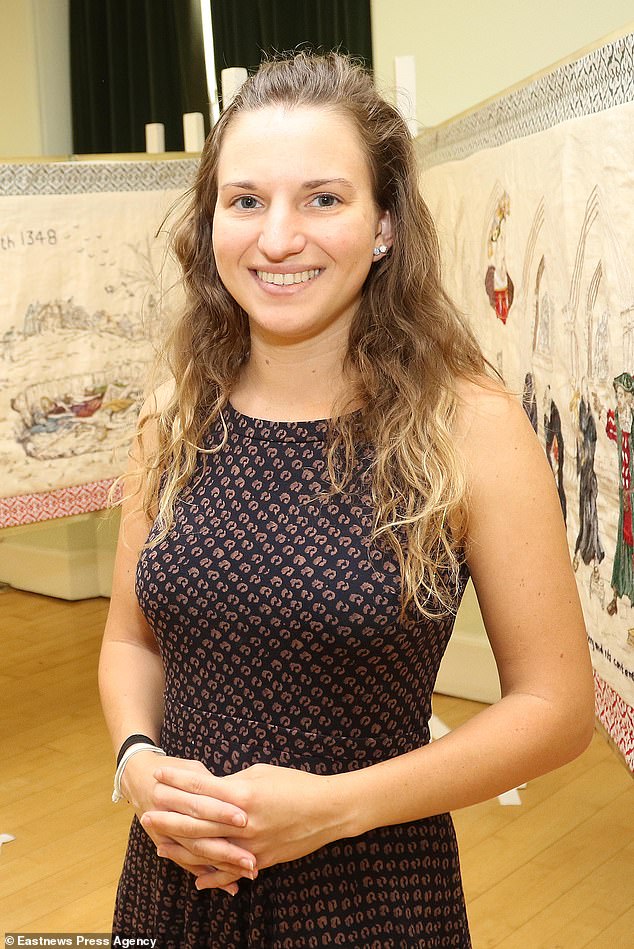 Madeline Odent (pictured), who lives in Oxford, has gone viral on Twitter after claiming she was deliberately given a decaffeinated drink at a coffeehouse

Madeline previously went viral on social media for tweeting a guide on how to use domestic chemicals to destroy bronze statues in the wake of the Black Lives Matters protests.

She comes from a privileged background in the United States. Her father, Dr Stephen Briggs, a personality psychologist, is president of Berry College, an affluent private liberal arts college in Georgia which boasts the largest college campus in the world. She moved to Britain in 2015.

In 2017 she married prominent banker Pascal Odent. The couple staged two lavish ceremonies, one in an English country house and the other in the opulent surroundings of her father’s college in Georgia, which sits in 26,400 acres of magnificent landscaped gardens.

Boasting almost 18,000 Twitter followers, Madeline penned a series of tweets to vent about her recent experience at Starbucks.

Madeline wrote: ‘Just now a Starbucks barista intentionally made my drink wrong because they “thought I didn’t mean to order a frappe that has coffee it” and look it’s such a minor thing, but people really treat pregnant bodies like public property. 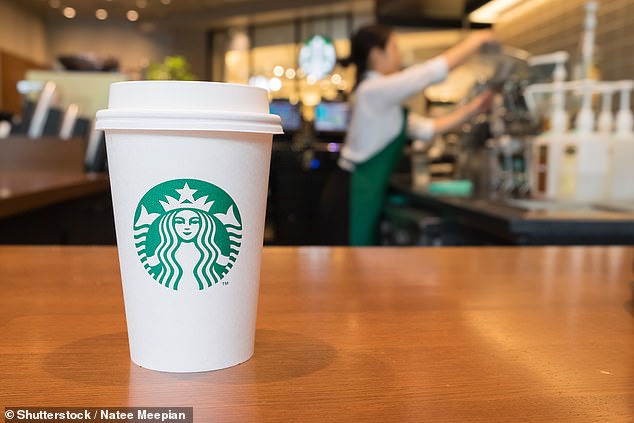 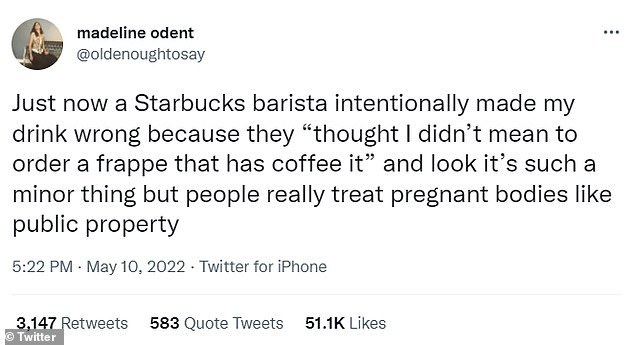 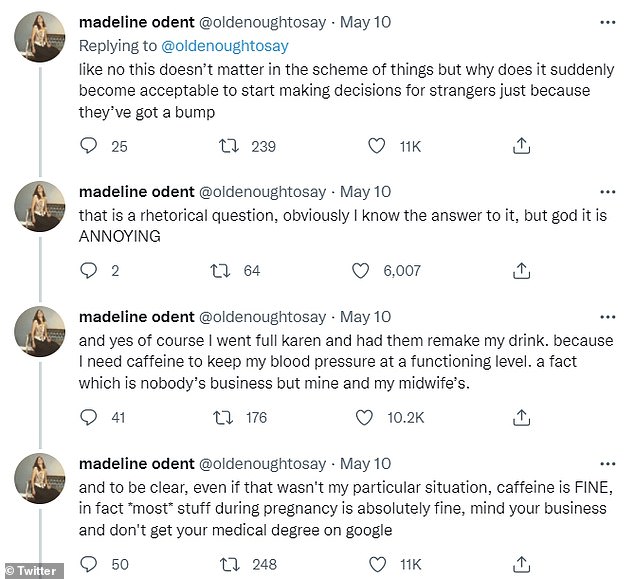 Over 51,000 people liked Madeline’s tweet as she vented about strangers making decisions on her behalf because of her pregnancy bump

‘Like no this doesn’t matter in the scheme of things but why does it suddenly become acceptable to start making decisions for strangers just because they’ve got a bump. That is a rhetorical question, obviously I know the answer to it, but god it is ANNOYING.

‘And yes of course I went full karen and had them remake my drink. because I need caffeine to keep my blood pressure at a functioning level. a fact which is nobody’s business but mine and my midwife’s.

‘And to be clear, even if that wasn’t my particular situation, caffeine is FINE, in fact *most* stuff during pregnancy is absolutely fine, mind your business and don’t get your medical degree on Google.’

A stream of responses to the tread claimed to have had similar experiences, with one person writing: ‘I had a barista argue with me about not ordering decaf! I had to tell her pregnant women are recommended to ONE CUP a day and the way she glared at me.’

Is it dangerous to drink caffeine during pregnancy?

The NHS recommends drinking no more than 200mg of caffeine a day if you’re pregnant.

High levels of caffeine consumption  in pregnancy have been linked to complications such as low birth weight, as well as miscarriage and stillbirth.

Research by Tommy’s the baby charity has found that the risk from caffeine increases the more you have, and therefore limiting caffeine consumption is recommended.

Research published in 2020 suggesting that there’s no safe level of caffeine during pregnancy, was later described as ‘overly alarmist’ by experts.

Another said: ‘Asked for my first mocha since. My baby was one week old & I just fed her… Male barista: ‘No… you’re breastfeeding right?!’

‘I was shocked at his refusal so he called his wife publicly shouting ‘she shouldn’t have coffee right?’ Wife: ‘I wouldn’t’. I ended up going for hot choc.’

A third added: ‘Constant caffeine-policing during both pregnancies, of course, but my most WTF moment was a co-worker TAKING AWAY my carbonated water (literally just water! with bubbles!) and sternly handing me a cup of still water with ‘you have to think about the baby now’.

Others tried to reassure Madeline that the barrister may have made a mistake, but one admitted they have also intervened with a pregnant friend’s lifestyle choice.

‘Are you sure they just didn’t mishear you and assume the non-coffee version to be safe? So many of the Starbucks drinks are insanely ambiguous in their naming and this happens all the time even outside of your specific case,’ one wrote.

Another commented: ‘Had a friend who was pregnant and drinking heavily. I along with a few other friends helped put a stop to it. It was the right thing to do. I’m glad I did because we found out she was also using drugs. We got her help.’

A third said: I saw a woman drinking while pregnant recently and I fully regret not communicating that this was not okay.’