The Prime Minister has rejected Victorian Premier Daniel Andrews’ plea for national cabinet to back his proposal for a “ring of steel” around Sydney in a bid to stop a deadly outbreak of the Delta variant of COVID-19 from spreading across the country.

Scott Morrison said the meeting of state and federal leaders was an opportunity to “dispel any concerns” that Sydney’s lockdown wasn’t strict enough or was “lockdown lite”.

“I’m quite certain that people living in Greater Sydney do not feel they are under loose restrictions,” he said.

Health authorities in NSW declared their state’s outbreak a “national emergency” on Friday as the state recorded 136 cases in a day. This prompted NSW Premier Gladys Berejiklian to appeal for a greater share of the nation’s Pfizer vaccines, claiming her state deserved it after doing “the heavy lifting for 18 months and keeping the virus at bay”.

Victoria recorded 14 cases on Friday and 11 of those people were in isolation for their full infectious period. Mr Andrews described the numbers as “very encouraging” and a “triumph”. Chief Health Officer Brett Sutton said the state was “on track” to end its lockdown on Tuesday.

Speaking before the national cabinet, Mr Andrews said the NSW outbreak posed a growing threat to the rest of the country and a “ring of steel” dividing Sydney from the rest of the state would stop the virus “spreading into other parts of our nation”.

Under the plan, police and Defence Force personnel would man roadblocks on the outskirts of Sydney and check vehicles to ensure residents don’t disobey movement restrictions.

“Sydney is on fire with this virus, and we need a ring of steel put around Sydney,” Mr Andrews said. “We will finish up with the whole country locked down if we don’t do this properly.”

But on the end to Victoria’s lockdown, the Premier was less definitive.

“It’s whether the next few days continue this way,” he said. “If we do the right thing, we will get the right outcome.” 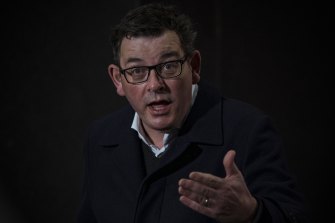 Despite the drop in case numbers, Mr Andrews said Victoria would not accede to a request from NSW to help with contact tracing until Victoria further reduced its caseload. He also hinted that help from Victoria could be contingent on whether Sydney adopted his ring of steel proposal.

“I want to be able to deal with our outbreak, have it settled and then have thousands of contact tracers on the phone helping out Sydney,” Mr Andrews said.

“We have veterans of a long and challenging second wave who can help NSW. We just have to get the situation under control here first and be confident that it’s locked into Sydney.”

With the number of cases in NSW continuing to rise, Ms Berejiklian requested more Pfizer vaccines to be redirected to Sydney hotspots battling the rapidly spreading Delta strain. 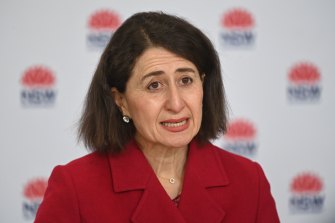 Before the national cabinet, Premier Andrews said he was not opposed to NSW receiving more doses, but said there was “barely enough vaccine allocation” for any states.

But state and territory leaders rejected New South Wales’ bid to boost its supply, instead agreeing to administer more first doses of Pfizer by extending the time between the two jabs from three to six weeks.

Before the meeting, Ms Berejiklian also added her voice to the growing calls for unvaccinated Australians to consider having the AstraZeneca vaccine instead of waiting for more Pfizer doses to arrive.

The plea followed an appeal from the Prime Minister to the Australian Technical Advisory Group on Immunisation to alter its advice recommending Pfizer as the vaccine of preference for people aged 16 to 60.

Due to limited supplies, the Pfizer vaccine is currently only available for those between 40 and 60.

Following the meeting, Mr Morrison said there was “agreement among the national cabinet that we need to continue to lean into AstraZeneca”.

Dr Khorshid said it was possible lockdowns would not be strong enough to deal with the Delta variant of coronavirus “and it may be time for clear advice to all young Australians in Sydney that AZ is a very safe and effective vaccine, and it’s the best way to help Sydney get out of this current crisis”.

Professor Allen Cheng, who is the advisory group’s co-chair for COVID vaccines, told The Age on Thursday there was a significant risk for those aged over 60 of becoming seriously ill with coronavirus, compared with a very small risk of the rare clotting syndrome linked to the AstraZeneca vaccine. But he said there was no “one-size-fits-all approach” to younger people.

“If you’re a young farmer in Western Australia going to get the supplies once a week … you’re probably not going to get COVID,” he said.

“But even if you did get infected, you’re probably going to do just fine. But that’s different to being somebody in Sydney right now, so that’s sort of the difficulty that we’re dealing with.”

On Friday, Mr Andrews confirmed he had spoken to Mr Morrison before the national cabinet about the Prime Minister’s appeal to the advisory group to reconsider its advice and recommend the AstraZeneca jab to younger Australians, indicating it might be willing to reassess its guidelines.

“I reckon they are probably looking at Delta and looking at the fact that if you’re not vaccinated the chances of getting this in a wild outbreak are really high,” Premier Andrews said.

While Victoria’s lockdown is scheduled to end at 11.59pm on Tuesday, a ban on residents entering the state from red zones without an exemption will remain in place until at least August 3, when it will be reviewed.

Mr Andrews said it was a “fair bet” that if the situation in Sydney didn’t improve then, Victorian residents would continue to be blocked from re-entering the state unless they had a valid exemption.

On Friday, 1000 Victorians were released from two weeks’ quarantine after returning negative tests and isolating for two weeks.