The Prince of Wales has launched the Royal British Legion’s (RBL) centenary poppy appeal with his wife and said the floral tribute was ‘as relevant today as it ever was’.

Charles and the Duchess of Cornwall met 10 volunteer collectors – one for each decade of the appeal – at Clarence House on Tuesday to mark the start of this year’s campaign to raise funds and awareness for the RBL.

The red poppy – a common sight on the Western Front – became a symbol of remembrance for those killed in the First World War as the conflict drew to a close. 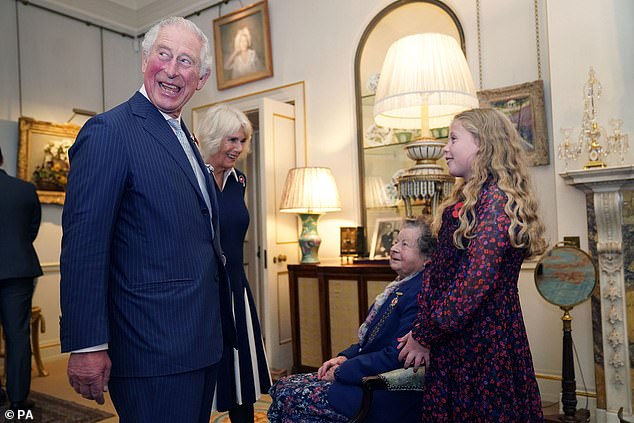 The Prince of Wales and Duchess of Cornwall talk with Jill Gladwell, aged 95, and Maisie Mead, 10, who are the oldest and youngest of ten Royal British Legion 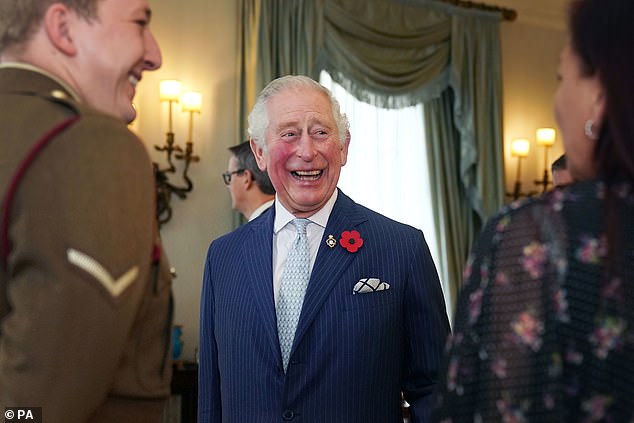 The Prince of Wales talks to Lance Corporal Ashley Martin, 27, who is currently serving in the Royal Army Medical Corps, and Anne-Marie Cobley, 48, who has carried on her family’s tradition of selling poppies since the 1950s 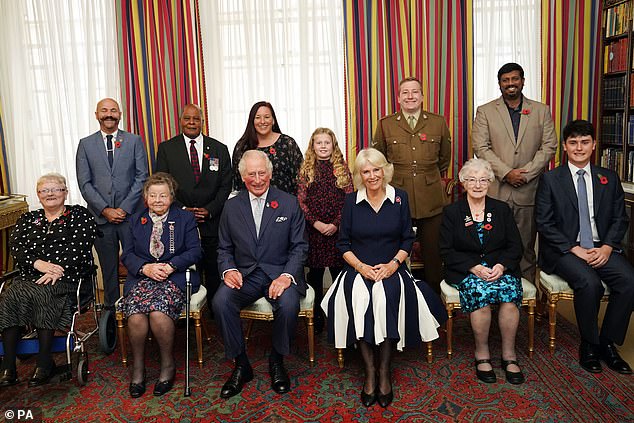 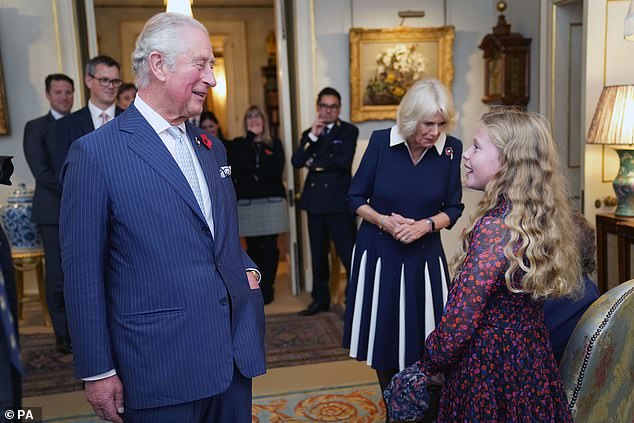 The Prince of Wales and Duchess of Cornwall talk with Jill Gladwell, aged 95, and Maisie Mead, 10, who are the oldest and youngest of ten Royal British Legion

The prince said: ‘In November 1921, the Royal British Legion’s first Poppy Appeal took place and the nation adopted the annual tradition of placing a small red flower on their clothing to signify respect and support for the Armed Forces community, their service and their sacrifice.

‘The significance of the poppy is as relevant today as it ever was while our Armed Forces continue to be engaged in operations overseas and often in the most demanding of circumstances.

‘The simple act of wearing a poppy is only made possible because of volunteer Poppy Appeal collectors who share a common goal – to recognise the unique contribution of the Armed Forces community.’

The Covid-19 pandemic meant poppy collectors could not go out into the community during 2020 but the tradition will resume this year in the run-up to Armistice Day.

The Duchess donned a navy gown with white detailing for meeting with collectors, opting to wear her blonde locks in her usual plumped blow dry style. 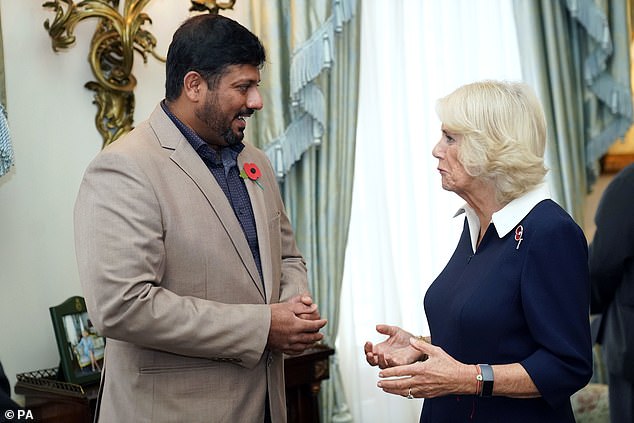 The Duchess of Cornwall talks to Mirza Shahzad, 36, who has been supporting the Poppy Appeal in Bristol, Cardiff, Swansea, and Gloucester since he moved to the UK from Pakistan in 2012 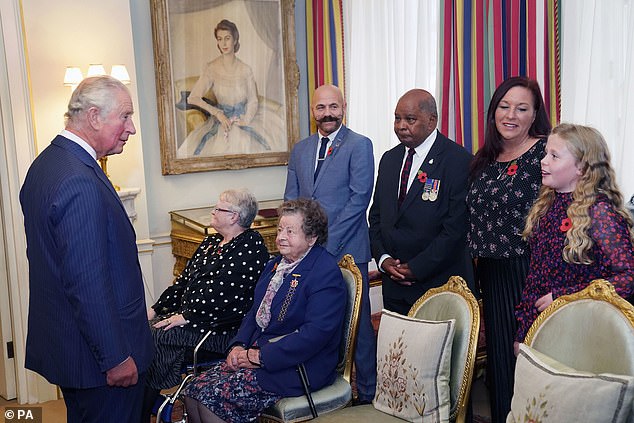 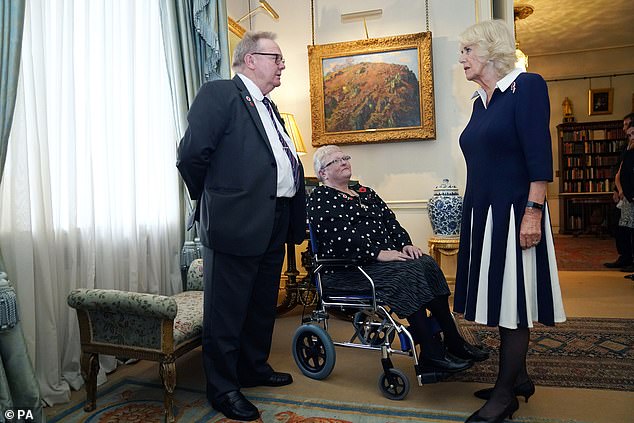 The Duchess of Cornwall (right) talks to Lesleyanne Gardner, 62, who is an Army veteran and has been doing the Poppy Appeal in Sunderland for almost ten years alongside her husband Ian

Charles and Camilla met Jill Gladwell, 95, who is celebrating 80 years of collecting for the Poppy Appeal this year.

She began as a schoolgirl during the Second World War after being inspired by her mother who collected in the 1920s and now five generations of her family are involved, including her great-great-niece, Charlotte, who is 10.

Mrs Gladwell, whose mother was one of the RBL’s first collectors, said: ‘I started collecting when I was 14 in 1940 and even then I knew the Poppy Appeal was important to the wounded men who had fought for the country and for peace.

‘My father followed the legion’s motto “Service not self” and I’m so happy to be back out collecting to support the Armed Forces community and their families this year.’ 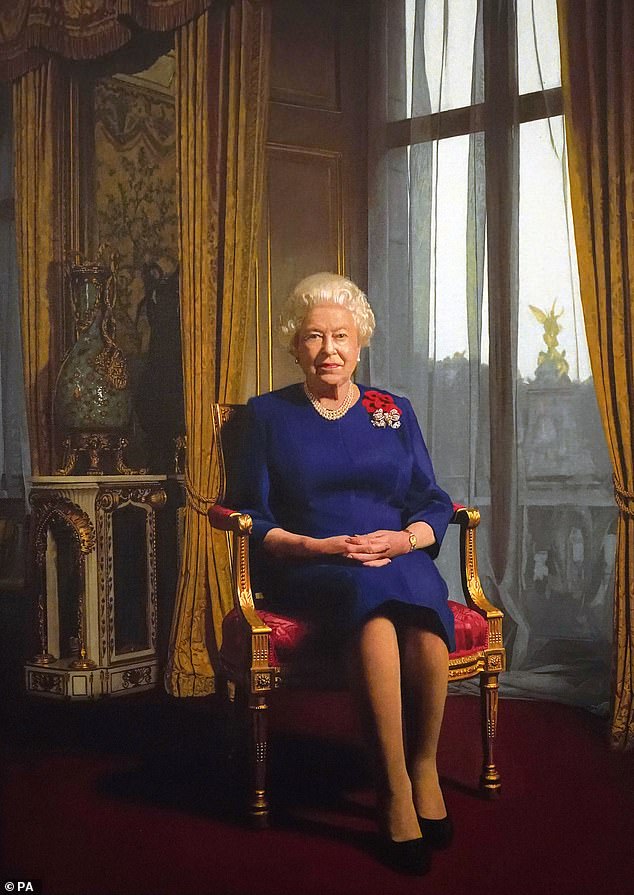 A full length portrait of the Queen wearing a spray of five poppies painted by Darren Baker to commemorate the 90th anniversary of the Royal British Legion, on display, as the Prince of Wales and Duchess of Cornwall meet ten Royal British Legion (RBL) collectors 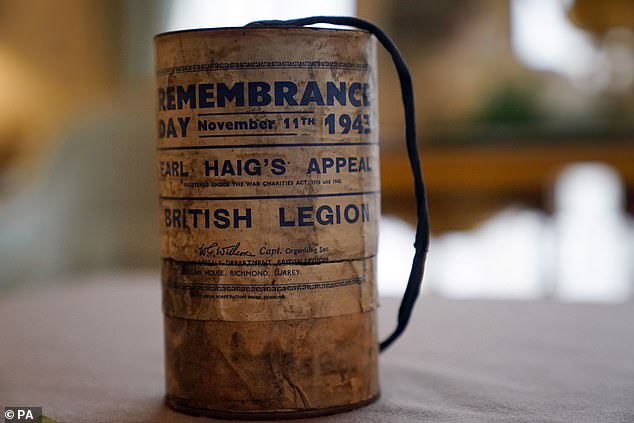 A Poppy Appeal collecting tin from 1943 on display, as the Prince of Wales and Duchess of Cornwall meet ten Royal British Legion collectors