Princess Charlene of Monaco has said she feels ‘much better’ than she has in recent years after a long battle with ill-health.

The Olympic swimmer, 44, spent almost a year away from the Mediterranean principality in her native South Africa, undergoing treatment for an unspecified condition.

She then booked into a clinic in Switzerland, leading to fears that she would find it hard to return to Royal life with her 64-year-old husband, Prince Albert.

However in a speech on the tenth anniversary of her foundation which was set up to encourage young swimmers, she talked about her health, her family and husband. 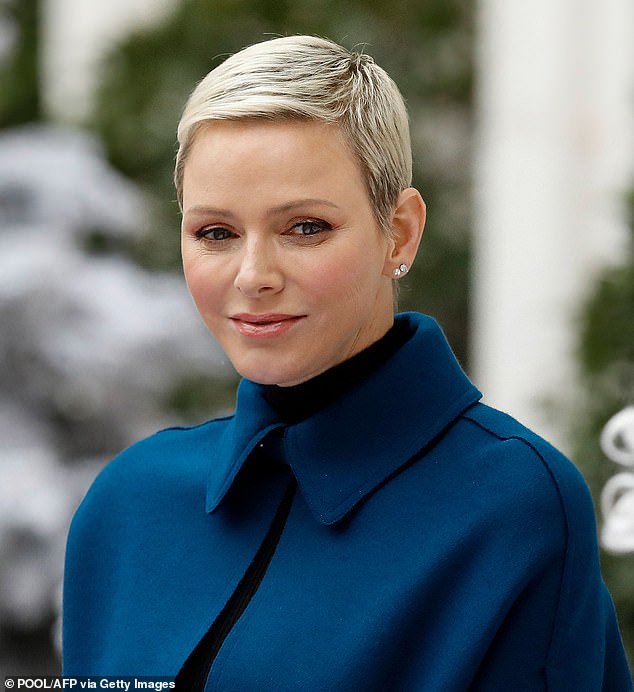 During her address at the family room of the Prince’s Palace, Charlene was surrounded by a picture of Princess Grace and her young twins Prince Jacques and Princess Gabriella.

The princess told local newspaper Monaco Matin she felt ‘so much better’ than she has in recent years.

Revealing she has ‘less pain and much more energy’, she said she ‘is continuing to recover, to rebalance herself.’

She added: ‘My family and those I love are my rock. I approach the future, step by step, one day at a time.’ 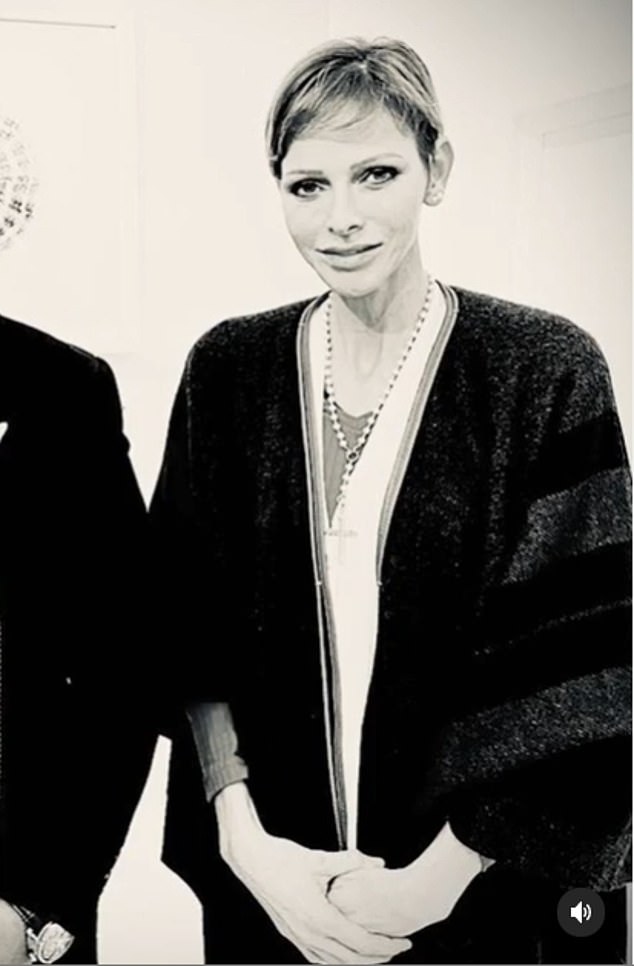 Princess Charlene ‘almost died’ after having surgery to address swallowing issues stemming from a severe throat infection, a source claimed (Charlene is pictured looking thin in 2021)

There have been reports of a rift between the Prince and Princess ever since their high-profile marriage in 2011.

At the time, Charlene was dubbed the ‘Runaway Bride’ by the French media after allegedly trying to flee before the wedding, but the reports were always denied.

Distinguished Royal expert Stephane Bern is among those who have speculated that Charlene’s health is often used to try and disguise relationship problems.

‘The Palace has had to invoke a suffering princess so often that the Monegasques today find it hard to believe,’ he wrote in Paris Match last year. ‘By crying wolf, the mother of Jacques and Gabriella has discredited and isolated herself.’ 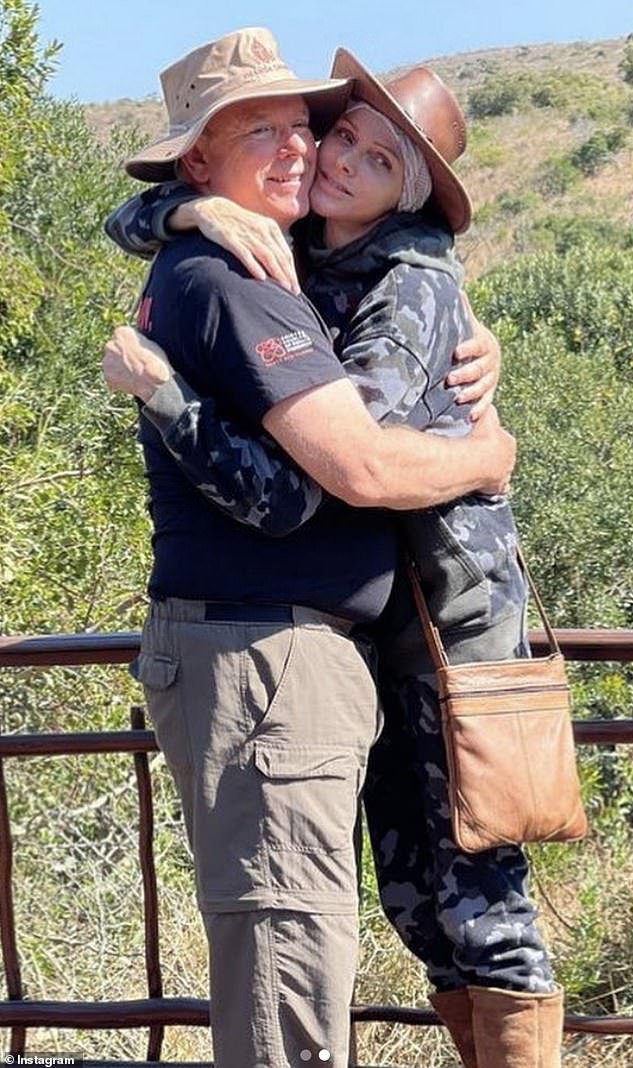 Pictured: Albert and Charlene pictured together during her time in South Africa in August 2021

Albert was hit with a legal claim for cash by an alleged illegitimate child in December 2020, and soon afterwards Charlene shaved half her head in the style of a punk rocker.

There were allegations that Albert had fathered a love-child with an unnamed Brazilian woman during the time when he and Charlene were already in a relationship.

The woman said she met the Prince in a nightclub in Rio de Janeiro in 2004, and that their daughter, who is now a 16-year-old Brazilian schoolgirl, sent a handwritten note to Albert.

In turn, Albert’s legal team branded the allegations ‘a hoax, and they never went to court – prompting speculation that the case was settled privately.

The Prince has admitted fathering two other children out of wedlock – Jazmin Grace Grimaldi, who is now 30 and the result of Albert’s affair with an American estate agent, and Alexandre Coste, 18, whose mother is a former Togolese air hostess. 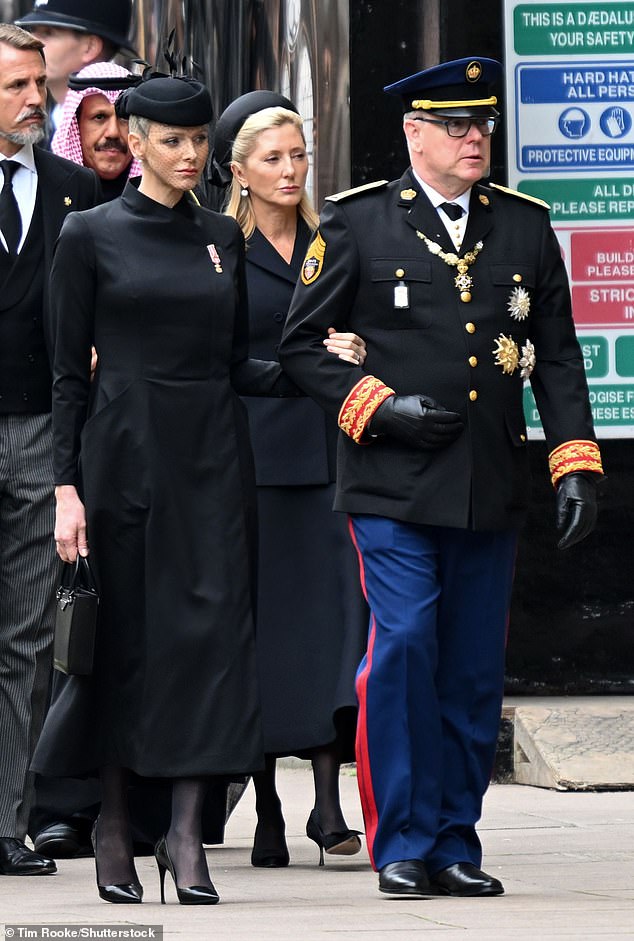 Both children were struck off Monaco’s line of succession in return for financial settlements.

Charlene first fell ill in South Africa in May 2021, during what was meant to be a 10-day visit.

Complications from a sinus operation led to her staying in her native country for 10 months, and there have been rumours about the state of her marriage ever since.

There had been claims by leading French media that Albert had signed an ‘ultra-confidential contract’ to pay his wife more than £10m a year to fulfil her Royal duties.

She returned to Monaco in November but was there for a matter of days before leaving for a Swiss treatment facility. The exact nature of her condition was not made public but Albert said she was ‘exhausted’.

Photographs of their reunion were greeted with a hefty dose of scepticism by the French media.

Prince Albert said he was ‘hurt by the vicious rumours’ peddled about his marriage following his wife’s absence and said that it’s the ‘most beautiful thing’ to have her back with him.

The Royal Palace announced in March that Charlene had returned and would make a gradual reintroduction to public life.

In recent weeks she has made full a handful of public appearances with her husband and children, including a visit to Norway and an outing to the F1, but the hospital marks her first outing alone.

The mother-of-two looked relaxed as she spent time speaking to parents and cuddling the tiny patients.

A match made in Monaco! Princess Charlene twins with her daughter Gabriella in a blue coat while Prince Jacques is his dad’s mini-me at Christmas tree ceremony

January 27 – Charlene is pictured with Albert for the Sainte Devote Ceremony in Monaco.

March 18 – Charlene is pictured at the memorial for the late Zulu monarch, King Goodwill Zwelithini at the KwaKhethomthandayo Royal Palace in Nongoma, South Africa

April 2 – Charlene posts an Instagram picture of herself, Albert and their twins Jacques and Gabriella for Easter.

It is unknown where the image was taken.

May 8 – Albert, Jacques and Gabriella attend a Grand Prix event in Monaco without Charlene

May 10 – Albert attends Monaco Gala Awards in Monaco without Charlene

June 3 – New photos emerge of Charlene on her conservation trip

June 24 – Charlene’s foundation releases a statement saying the royal is unable to travel and is undergoing procedures for an ear, nose and throat infection

July 2 – Charlene and Albert mark their 10th anniversary separately. ‘This year will be the first time that I’m not with my husband on our anniversary in July, which is difficult, and it saddens me,’ Her Serene Highness Princess Charlene said in a statement.

July 3 – Albert appears with glamorous niece Charlotte Casiraghi at the 15th international Monte-Carlo Jumping event, which is part of the Longines Global Champions Tour of Monaco,

August 13 – Charlene undergoes a four-hour operation. The reason is not announced

September 2 – She is discharged, with a statement from the Palais Princier reading: ‘Her Highness is closely monitored by Her medical team who said that Her condition was not worrying’

November 8 – Charlene arrives back in Monaco. Prince Albert said within hours it became clear she was ‘unwell’

Following his return from the trip, Prince Albert holds an intervention with Charlene’s brothers and a sister-in-law in which Charlene ‘confirmed’ she would seek ‘real medically framed treatment’ outside of Monaco