It’s been a busy day for Princess Eugenie, who spent the afternoon meeting Duke of Edinburgh award recipients before dashing off to join her sister at a fundraiser.

The royal, 29, attended The Animal Ball Art Show in Mayfair, London, this evening along with 30-year-old Princess Beatrice.

Earlier today she met recipients of the Duke of Edinburgh Gold Award and was seen giggling with guests in the grounds of Buckingham Palace.

Apparently not having time to change, Eugenie remained in her stunning £1,900 two-tone dress – which is a creation of her wedding dress designer Peter Pilotto. 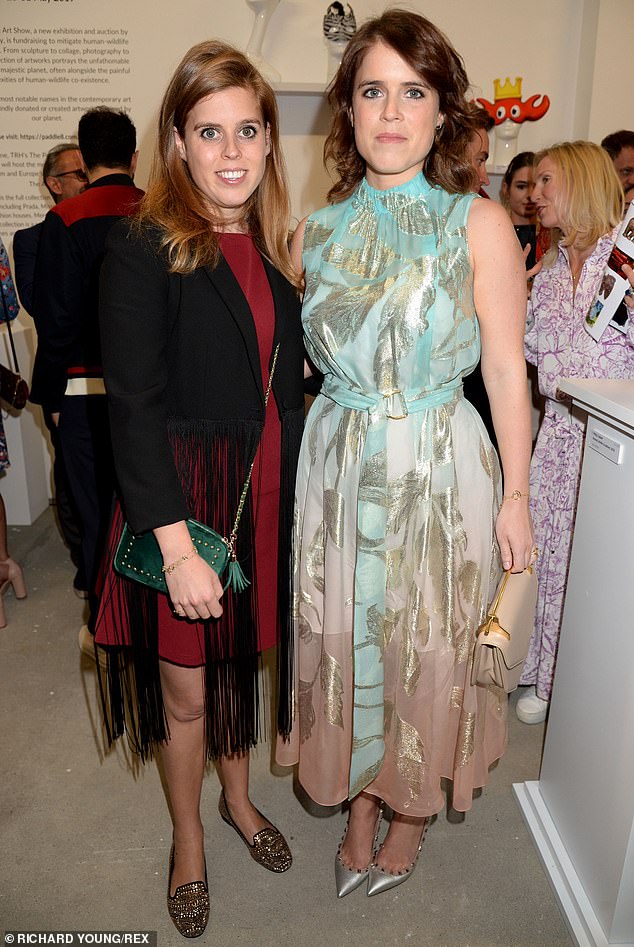 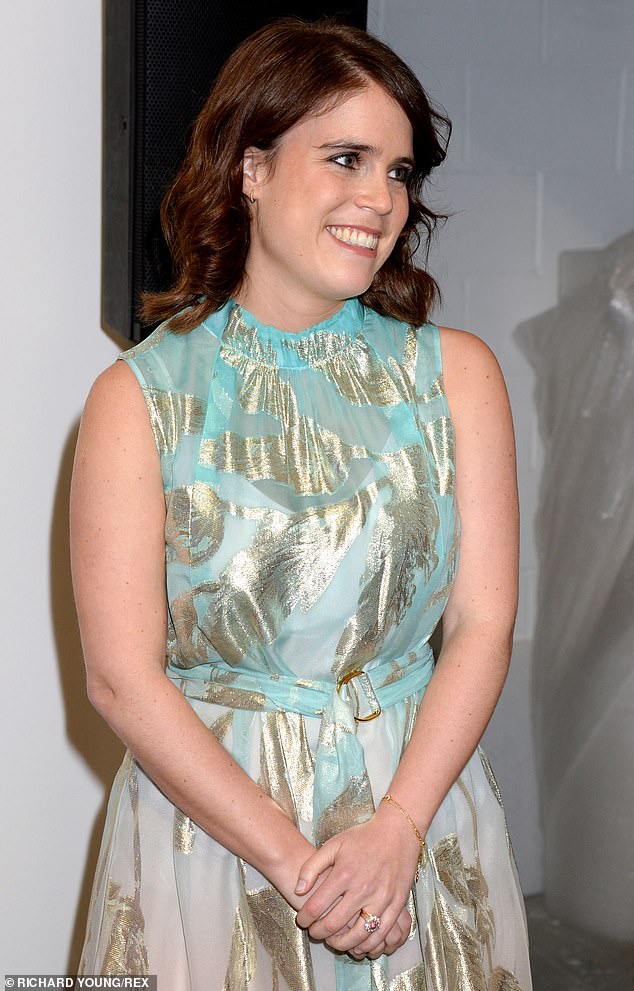 Princess Eugenie, pictured, stayed in the same £1,900 Peter Pilotto dress that she wore to the Duke of Edinburgh Gold Award celebrations at Buckingham Palace this afternoon 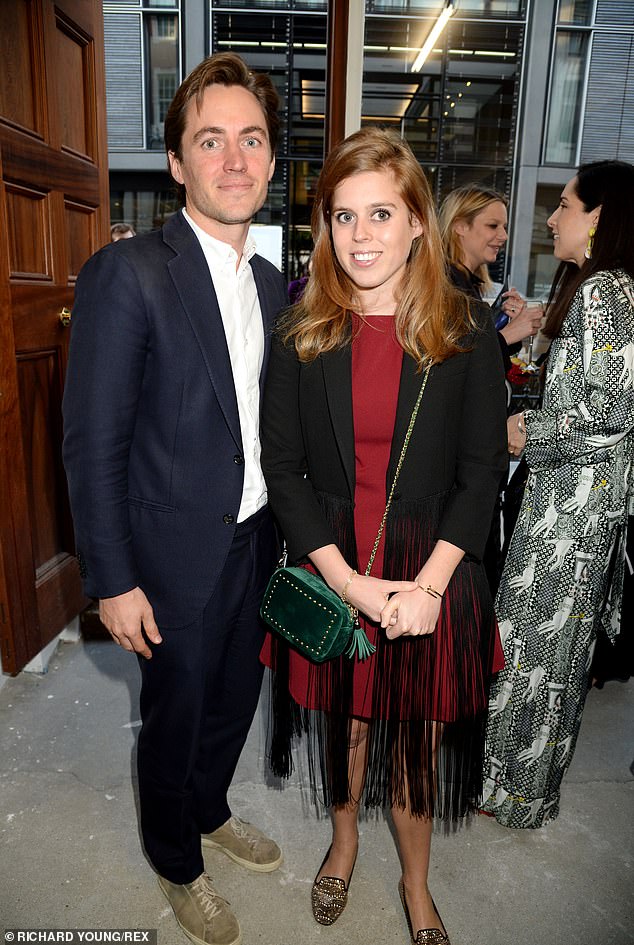 Princess Beatrice and her boyfriend Edoardo Mapelli Mozzi, pictured together, attended the art show together. Artworks being displayed will later be auctioned off to raise money to help mitigate human-wildlife conflict in Asia

She also wore the same silver studded shoes, but did grab a cream handbag with a gold handle to complete her evening look.

Her sister Princess Beatrice opted for a fitted knee-length red dress for the Animal Ball Art Show under a frilled black jacket.

Beatrice paired the outfit with some sparkly flat shoes and a green velvet cross-body handbag.

The two sisters appeared relaxed at the event and were seen chatting to each other as guests enjoyed the art work around them. 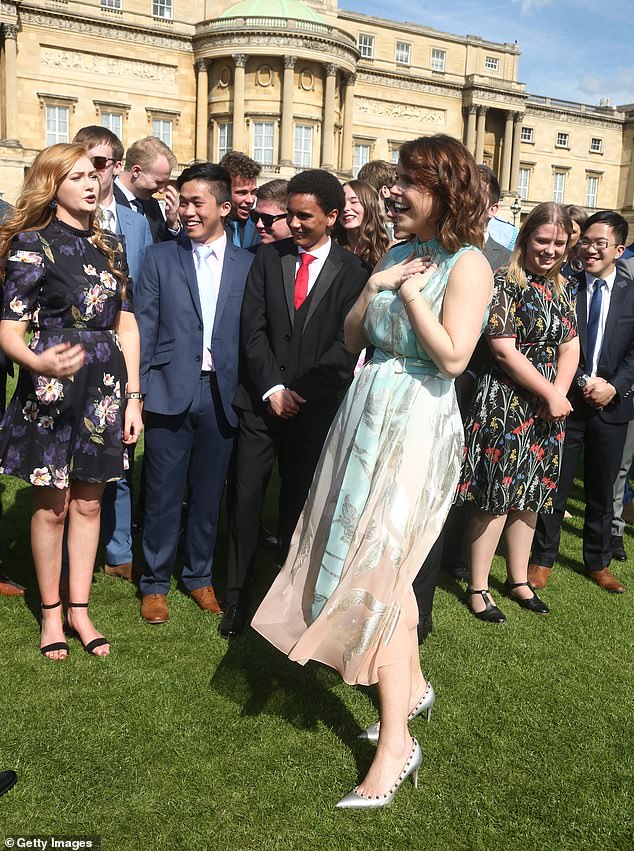 Earlier today Princess Eugenie, pictured, was at Buckingham Palace for the Duke of Edinburgh Gold Award presentations and appeared to be enjoying herself with the recipients 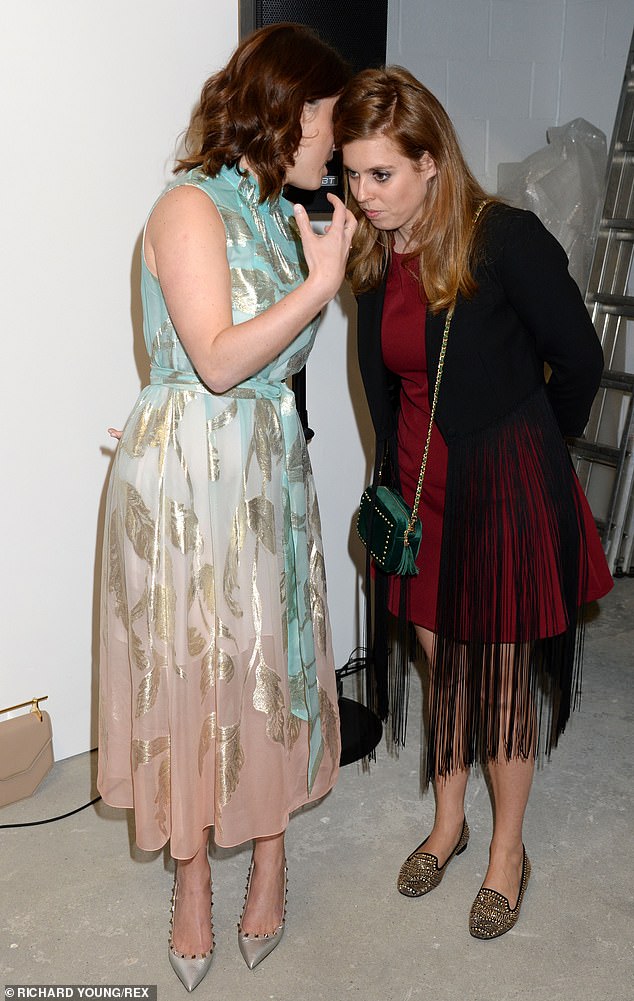 The two sisters shared a quiet word at the art show this evening. Princess Beatrice, right, opted for flat shoes while her younger sister wore a pair of studded silver heels 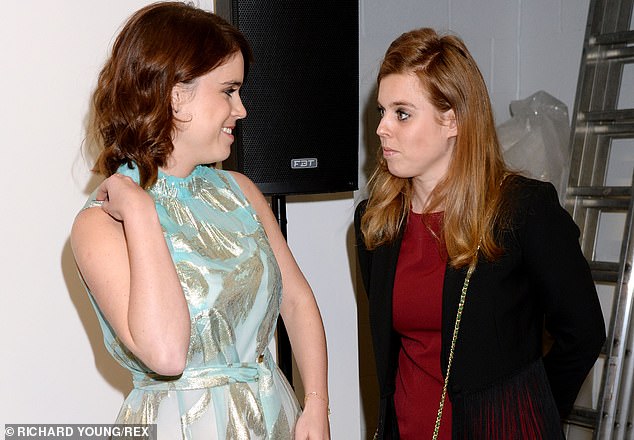 The Animal Ball Art Show is an exhibition and auction by Elephant Family and raises funds to mitigate human-wildlife conflict in Asia.

Some of the most significant names in contemporary art, from Tracey Emin to Joana Vasconcelos, have donated or created artworks for the occasion, inspired by wildlife and nature.

The 28 pieces on show will be on view in a public exhibition at 9 Cork Street Galleries in Mayfair before becoming available to buy online.

Tracey Emin’s artwork, a neon sign reading ‘Loving you more’, has a starting bid of £60,000, with the online bidding opening on June 12. 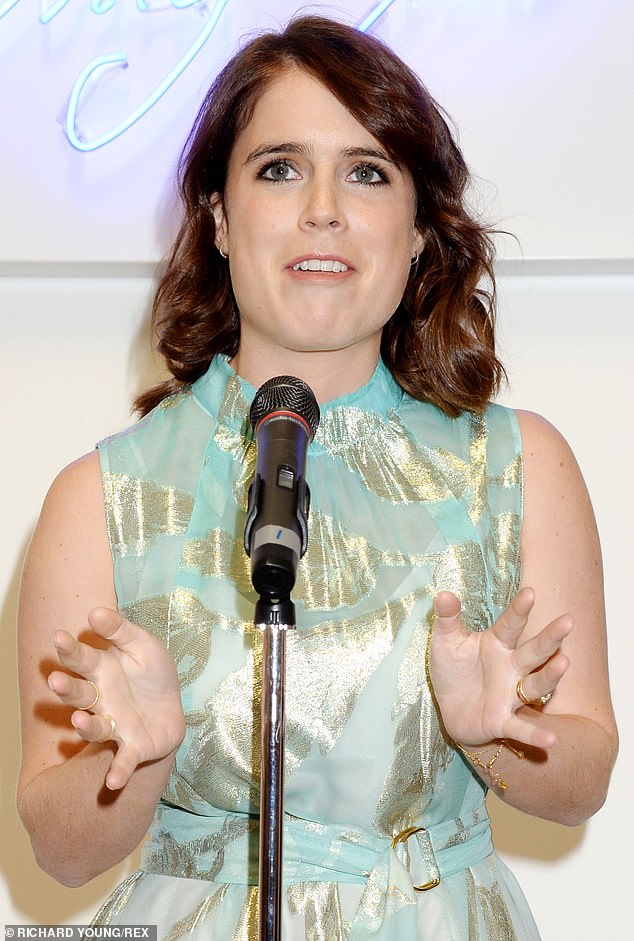 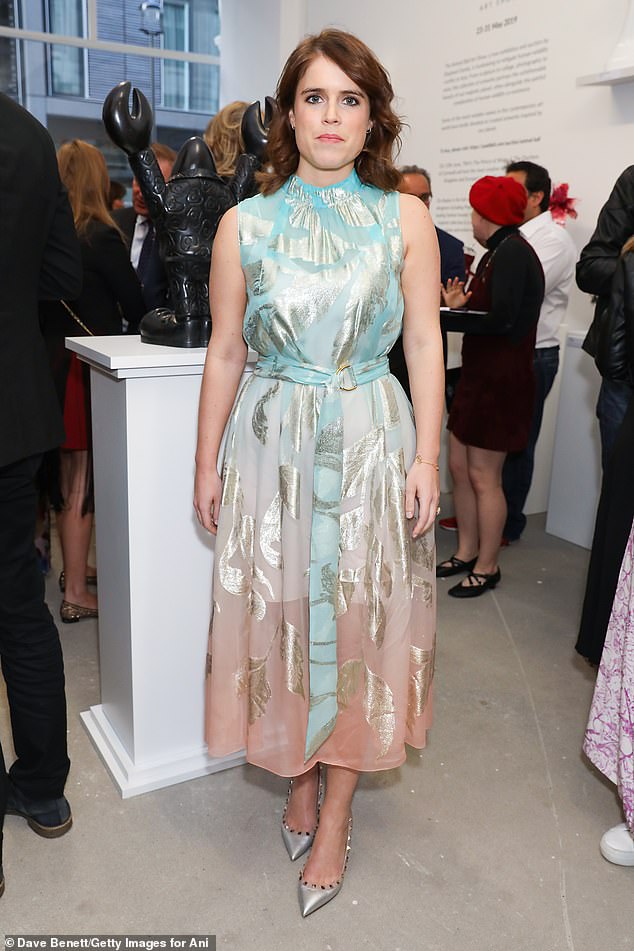 Princess Eugenie also spent time with other members of her royal family today as she attended the Duke of Edinburgh Gold Awards.

Her aunt and uncle, the Earl and Countess of Wessex, were at the celebration and all three royals appeared to be in good spirits.

Sophie, 54, wore a £895 black floral-patterned dress from designer Suzannah with long sleeves at the award presentations for her father-in-law’s youth programme. 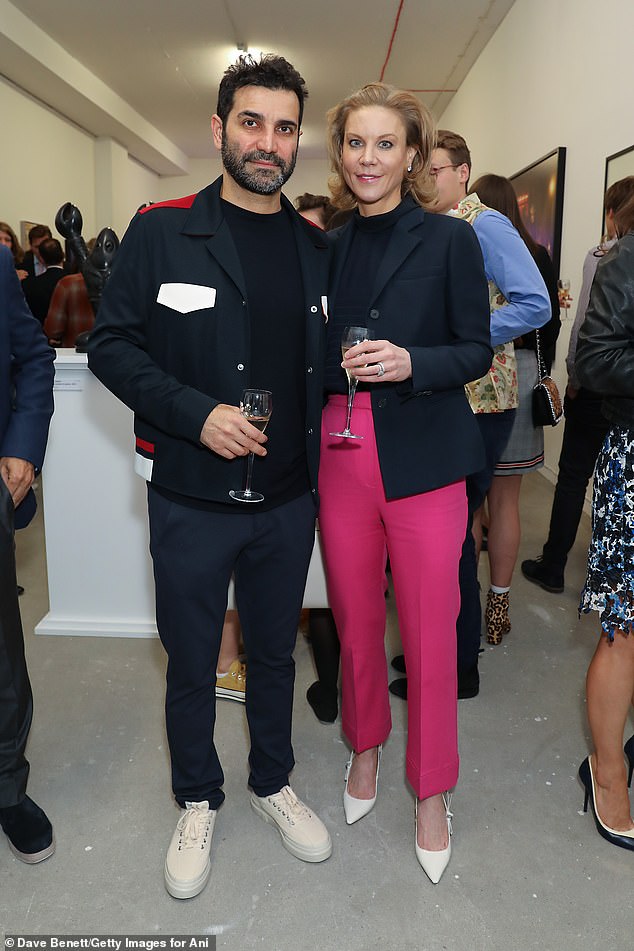 The Princesses were seen talking to a number of people at the event. Left is Princess Beatrice with CEO of Elephant Family Ruth Ganesh and right is Eugenie with designer Charlotte Dellal 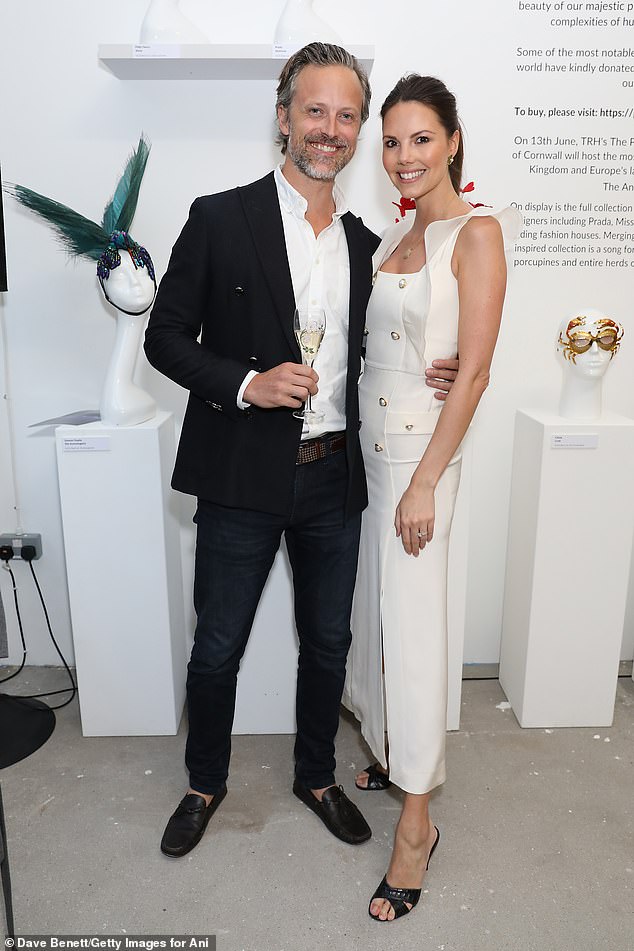 During the event she was spotted chatting to former ballerina and Strictly Come Dancing judge Dame Darcey Bussell.

Not wanting to be outshone by the royal ladies, the Duke of Edinburgh’s son the Earl of Wessex made sure to look his best.

He was seen accessorising his smart black suit with a purple tie and summer hat – which he later took off and appeared to throw into the air.