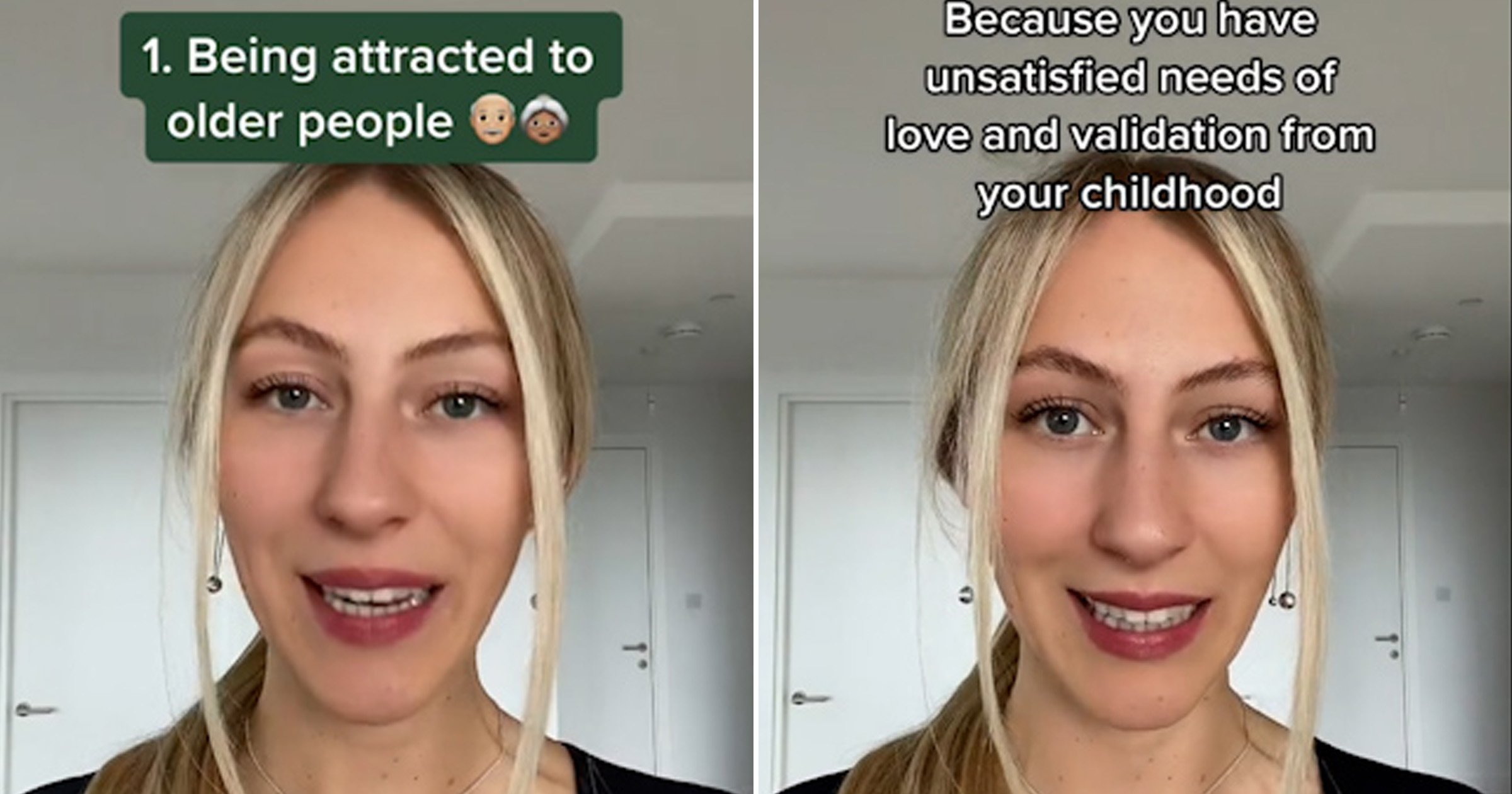 Thanks to Love Island, being someone’s ‘type on paper’ is pretty much a dealbreaker when dating.

Yet having a type might say more about you than who you’ve got your eye on, as a psychologist has revealed on TikTok.

In a series of videos, she explains what attraction to certain types of people might say about your character.

You might think your predilection for ‘bad boys’ stems from romantic leads in movies, but to those in the know it actually goes far deeper – and may suggest you’re looking for love in all the wrong places.

So you can spot toxic traits and avoid making the same mistakes next time you’re single, it helps to know what you’re working with. These are Francesca’s seven dating types and what they say about you:

If you always find yourself in age-gap relationships, Francesca says the reason might be rooted in your childhood

‘Being attracted to older people can signify that you’re looking for a “parent” to take care of you because you’ve got unsatisfied needs of love and validation from your childhood,’ she explains.

Those who look for younger partners may do so because they had caring responsibilities as a child, and taking care of others makes them feel needed.

‘If you’re attracted to people that are unavailable because they are in a relationship or they’re abroad, it could mean that you have commitment issues,’ says Francesca. ‘Because with these kind of people you don’t have to fully commit.’

In another clip, she suggests that going for people who don’t feel the same way you do may suggest low self-esteem.

She explains: ‘It could be because unconsciously you have this belief that you need to fight for love and you don’t just deserve it.’

Francesca says that attraction to possessive partners may be down to ‘unmet childhood needs of being taken care of and protected.’

She adds that you might be ‘looking for a more extreme person so it feels like someone is taking care of you.’

The old trope that women love ‘bad boys’ is unfounded – it’s less to do with gender, and more to do with rebellion.

If your type is someone who is a little rough around the edges, you might be ‘too good’ yourself and looking to be seen in a different light.

‘You’re repressing your negative qualities like aggression or arrogance,’ Francesca says. ‘So you’re unconsciously looking for someone to help liberate that repression.’

People ‘less attractive’ than yourself

This type might be because you’re afraid of abandonment, according to the psychology graduate.

‘You chose someone that’s lower in mate value than you are so they’re less likely to abandon you and will treat you better,’ Francesca says.

As might be expected, mate value refers to someone’s perceived ‘desirability’ in terms of reproductive success and attractiveness, for example.

Constantly find yourself in rollercoaster relationships? It might mean you ‘unconsciously enjoy the drama.’

Francesca says: ‘The chaos feels familiar because you might have experienced that in your childhood and you might even find normal relationships boring.’

Abuse is never the victim’s fault, but learning about these patterns helps with both healing and spotting warning signs in partners in future.

If you’re crushing on a fictional character – whether on TV or in a book – it means you’re using it as a protective mechanism.

Francesca says: ‘If you’re attracted to fictional characters, it could be because you idealise love and you put it on a pedestal.

‘This is a child’s thinking that lives in their imagination instead of doing the real thing so they don’t get hurt.’

Rather than dealing with the hard stuff, you spin a fairytale. Yet, as Francesca explains, ‘this way of thinking is toxic to yourself.’

‘Love is not ideal and it has ugly sides to it,’ she says. ‘And that is totally normal.’