For years, an old sign on a Flemington shop has intrigued passers-by.

Girdwood’s Hygienic Library, reads the lettering above the door of what is now Pepper Cafe. 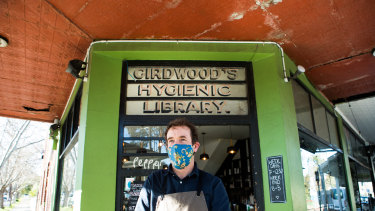 Simon Peterson and the historic Girdwood’s Hygienic Library sign over the door of his cafe in Flemington.Credit:Jason South

Cafe owner Simon Peterson thought the sign beautiful when he bought the business, in Pin Oak Crescent, 12 years ago.

And it was a talking point.

But it's not some cute retro piece. Research shows that the library that once operated on the site was part of a sanitising movement to stave off deadly diseases, 80 years before COVID-19. 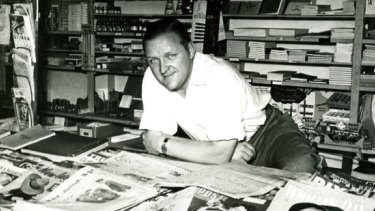 Allan Girdwood at the family newsagency and lending library in the 1950s.

Local historian John Dickie said that in about 1938, a W. Girdwood opened a newsagency at 44 Pin Oak Crescent, then called Railway Place.

Mr Girdwood, known as Bill, and then his nephew, Allan, ran the business for 20 years.

Being a hygienic library was a selling point: staff would wipe books and spray shops with antiseptic. Some placed books in fumigation closets. 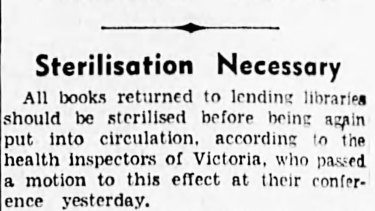 Hygienic libraries sprang up across town, from Moonee Ponds to Williamstown, South Melbourne and Hawthorn.

A clue as to why is a 1938 report in The Age that said Victorian health inspectors had resolved that all books returned to lending libraries should be sterilised before going back into circulation.

Historian Professor Janet McCalman said it was a time of anxiety about incurable diseases such as tuberculosis, influenza and polio.

During the late 1930s polio epidemic, people were afraid of being infected while carrying out mundane tasks such as borrowing a book.

Polio could cripple or kill some victims, or send them into iron lungs – coffin-shaped machines that helped sufferers breathe.

Historian Dr Anthea Hyslop said there was a growing understanding that diseases were caused by organisms, which could linger on objects such as books, rather than by noxious vapours, as previously thought.

Today, Pepper Cafe staff, in an echo of the past, practise studious wiping and spraying of surfaces and goods.

While the store lent books to soothe anxious souls 80 years ago, today it offers customers coffee, food and connection.

Mr Peterson said Pepper Cafe’s income is down 50 per cent on last year but he feels lucky to be open, albeit only for take away and delivery and with an amped-up online presence.

He likes how the shop is still a family business, continuing despite an outbreak of disease.

"We’re still standing and we’re in the same predicament, or similar," he said.

"We're probably luckier now that we’ve got more education out there and we can teach people to be more hygienic.

"Clearly they were trying, in their own way all those years ago, to get the message across, of how to do things better."

Get our Coronavirus Update newsletter for the day’s crucial developments at a glance, the numbers you need to know and what our readers are saying. Sign up to The Sydney Morning Herald’s newsletter here and The Age’s here.