After staring down apocryphal predictions of the end of the printed word, the arrival of the ebook and the Australian start-up of Amazon, one of Australia's leading independent booksellers, Pages & Pages, said it was a looming recession that drove its decision to shut its doors at the end of August.

In news that sent chilly winds through the heart of book industry and retailing, the Mosman book store said it would not renew its Military Road lease in September after concluding that trading conditions were only likely to worsen. 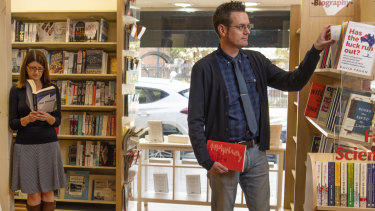 Jon Page’s (pictured) Pages & Pages bookstore in Sydney’s Mosman will be closing at the end of August.Credit:Louise Kennerley/SMH

The family-owned book store had been trading for more than 20 years. Started by Chris and Phil Page in Belrose, it shifted premises to main street Mosman in 1999, where it has been managed by son Jon; a vocal champion of booksellers as a former chief executive officer of the Australian Booksellers' Association.

''It's been tough for a while,'' Jon Page said. ''We've fought the good fight but it's just continuing to get tougher out there and with the lease expiring in September it gives us a way to exit without getting into more financial trouble or getting to a point where we can't pay bills or suppliers.''

Although some publishers are reporting a solid if unspectacular year so far, book retailers say the usual pre-election trading dip has turned into a post-election sales slump, particularly among inner-city Australia, traditionally heavy book buyers.

''I call it a retail recession,'' Page said. ''We spoke to retailers on the strip where we are and some of them have already closed and got out, and some are having very bad trading days like us. It's the retail malaise, people aren't spending at the moment and it has got considerably worst in the past three weeks.

''The week before the election was really bad, sometimes that can be the way – people are uncertain where the results will go, but the two weeks after the election it was diabolical; it took another big dive and that made it easier to make the decision.''

The soft trading conditions have been compounded by the lack of a million-copy bestseller like The Girl on the Train, or Fifty Shades of Grey.

Stellar debuts like Trent Dalton's Boy Swallows the Universe, Heather Morris's The Tattooist of Auschwitz and Holly Ringland's Lost Flowers of Alice Hart, alongside Scott Pape's The Barefoot Investor, have been successful but have not propelled people through the door.

The demographics of Mosman are also in flux, with university-educated doctors, lawyers, academics and journalists supplanted by cashed-up bankers and entrepreneurs, sometimes buying in from overseas.

''The first lot are readers,'' said one industry commentator. ''The second lot, not so much.''

Together they make for what Page describes as a ''perfect storm''. As news broke, loyal customers of Pages & Pages were tearful.

''We downsized our shop, we entered the online space and gave that a go, we tried to get into the ebooks and that was coming up," said Page, who entered the book business in Year 11 and had hoped his children would take over.

"It just gets to the point where you pull the pin and say enough is enough, we've got to make the right decision with our heads, not our hearts.''