Holiday cheer turned to jeer when the ladies gathered at Kyle’s for Christmas dinner, following the release of an explosive ‘LA Times’ article about Erika.

Alliances formed during the August 18 episode of The Real Housewives of Beverly Hills as the ladies tried to figure out whether Erika Jayne‘s been telling the truth about her split with Tom Girardi. For Erika’s longtime friends — Kyle Richards, Lisa Rinna and Dorit Kemsley — it was an easy decision to blindly support their girl, but for the others — not so much.

While everyone rallied around Erika immediately after her split was announced, feelings shifted once an unexpected news article revealed that Tom was facing startling embezzlement claims. How much did Erika know before she filed for divorce? Was she aware that Tom was allegedly stealing money from “widows and orphans”? And if so, where did the money go? Those are just a few of the questions the ladies were left asking after reading the lengthy piece that was published by The Los Angeles Times in December. 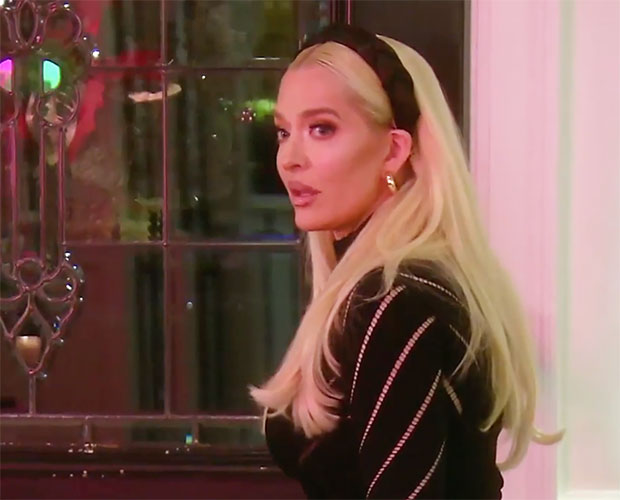 So upon the ladies’ return from La Quinta, Sutton Stracke called a secret meeting — without Erika — to share her feelings. And she made it very clear that she was afraid her reputation would be tarnished if she was further associated with Erika. Dorit, surprisingly, expressed the same concerns and said that what the article was claiming was “sickening” to her. “It hurts,” she said.

Sutton also said that, after reading the LA Times article, Erika’s story about Tom’s car accident no longer made sense. If his brain was affected by the crash that she described in previous episodes — and that was the reason behind his money mistakes — then why did the article allege that Tom was stealing money from his clients for at least the last decade.

Sutton, Kyle and Dorit all admitted to seeking advice from lawyers or those familiar with law to learn more about Erika’s case and find out if they’d be affected by being associated with her amid her legal woes. And Sutton said she wouldn’t be afraid to admit that to Erika’s face the next time she saw her — but that wasn’t exactly the case when the ladies reunited with Erika at Kyle’s Christmas dinner.

After everyone exchanged awkward pleasantries, and sat down at the table with their plates full of carbs, the interrogation began. Sutton asked Erika if she’s “truly” been “blindsided” by all the news that’s emerged since her split, but she said she doesn’t “have access to lawsuits” before they go public.

Then, Sutton and Crystal Kung Minkoff said the timeline of Tom’s accident and the start of the allegations didn’t line up for them, and while Erika acknowledged their confusion, she said she wasn’t going to “answer anyone’s questions” pertaining to any lawsuits.

Once Dorit jumped in to defend Erika, saying no one was going to “pry” into her personal business and ask uncomfortable questions, Garcelle Beauvais cut her and off and said, “That’s not what you said the other night”.

Dorit was then forced to tell Erika about the ladies’ secret meeting, and Erika was none too pleased. “Is this a grand jury? WTF is this s***?” she asked. And from there, things went from bad to worse.

Sutton said “we want as much knowledge” about the situation as possible, but Lisa was quick to jump in and say, “I don’t think it’s ‘we’. Let’s get real clear,” as Kyle agreed — Sutton took a “very different stance” than some of the others during their prior get together. They didn’t want to be looped into her interrogation of Erika.

And from there it became a battle about who supports and knows Erika more, which irked Garcelle to her core. Because, to be honest, she didn’t care all that much about Erika. What she cared about was whether or not the victims would eventually get the money that was taken from them. And Erika agreed. She said she felt the same way.

Erika further claimed that she “did not know anything” about the allegations that were brought upon Tom. Nor does she know why it’s been claimed that Tom filtered $20 million into her LLC to help support her pop music career.

Further questions from Sutton only made Dorit start to feel “uncomfortable”, so she asked everyone to stop ganging up on Erika, but Garcelle accused her of being a hypocrite since she wasn’t being so supportive the other night.

Basically, the entire night caused a huge divide amongst the group and we’re not too sure the ladies can ever recover from this. But either way, Erika is fully “ready” for the reunion.