ROBERT HARDMAN: As residents grumble about security killing business at the G7 Cornish venue where the PM’s granny holidayed… Never mind the anarchists, how WILL Boris Johnson keep fuming Carbis locals at bay?

Of all the places Boris Johnson could have picked – and he had the whole of Britain’s hospitality sector on bended knee before him – the PM has certainly made an unusual choice.

Handed the rotating presidency of the G7 Summit of the world’s leading economies, he decided that the best place to hold their first summit after the longest hiatus since the Cold War should be here – in a glorified country pub at the end of a tiny cul-de-sac, wedged between a railway line and the beach where the Slater family from Essex are currently building sandcastles.

Make no mistake, the event which is about to unfold here in Cornwall’s Carbis Bay, next door to the artistic fishing town of St Ives, is a proper summit. More than 6,000 police and thousands of troops are currently taking up residence in the fields hereabouts (they even have their own pop-up Tesco).

The skyline is suddenly peppered with phone masts and miles of steel mesh fencing are going up, along with ‘No Entry’ signs and footpath closure notices. 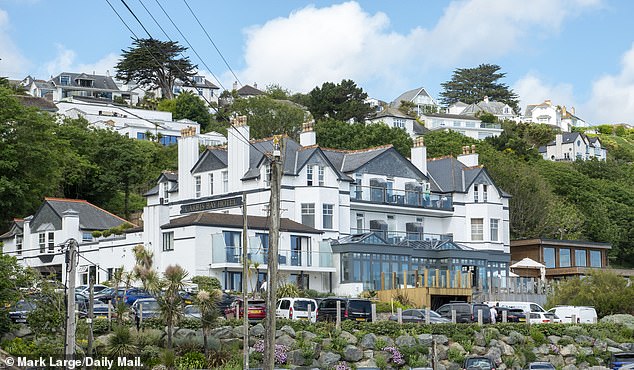 The Carbis Bay Hotel was built in 1894 by the prominent Cornish architect, Silvanus Trevail, a great enthusiast for modern sanitation

Demonstrators have been assigned special protest zones miles away. Had Donald Trump won last year’s US presidential election, this place would doubtless already be full of fury, placards and plastic tents.

Since it will, instead, be Grandpa Joe Biden who will be touching down in Air Force One on the tarmac at dinky Newquay airport next week, tempers remain lukewarm.

The biggest show of anger planned thus far is a sonic protest by a 1,000-strong ‘whirly tube’ orchestra waving plastic pipes next Saturday lunchtime. However, riots or no riots, this is still a big deal on the geo-political international stage.

It’s why so many Press will be descending from around the globe that there is simply no room for them in Carbis Bay or St Ives or, indeed, anywhere in North Cornwall.

They will watch it on telly in a giant media centre 30 miles away on the South Coast – in a museum car park in Falmouth.

But then the summit venue has been chosen not for convenience but for the optics. What a picturesque and curated scene it will be – a crescent of immaculate sand, an unblemished turquoise sea and a modest Victorian hotel on a tree-covered cliff with uninterrupted views of the north Cornish coast all the way to Trevose Head.

Welcome to Britain, it will say, and you can stick your amber-listed fleshpots where the sun don’t shine. 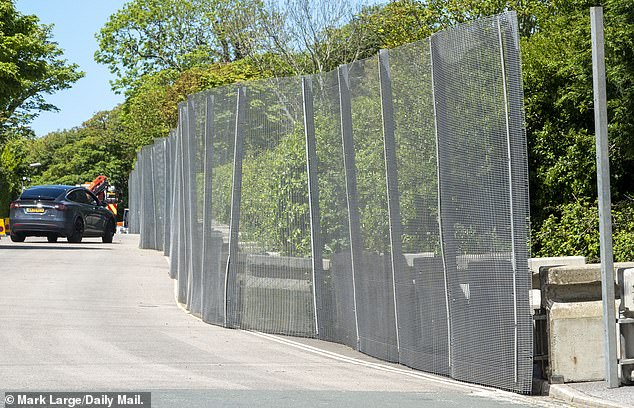 The skyline is suddenly peppered with phone masts and miles of steel mesh fencing are going up, along with ‘No Entry’ signs and footpath closure notices

However, the setting does look rather more suited to an episode of Poirot than a conflab between the lords of the free world. Chuck in all the bag-carriers and bodyguards and things are certainly going to be pretty intimate.

The Carbis Bay Hotel was built in 1894 by the prominent Cornish architect, Silvanus Trevail, a great enthusiast for modern sanitation. He was found shot dead in the lavatory of a train just outside Bodmin in 1903, not that Poirot would have spent long on that case.

Trevail was a manic depressive. Verdict: suicide. A decade later, his hotel would have one of its most famous guests (up until next week, that is). Novelist Virginia Woolf came to stay with her husband Leonard a few weeks before the outbreak of the First World War and shocked the management by signing the visitors book in purple ink (the summiteers will find her entry hanging in the corridor next to the bar and the chintzy Silvanus Trevail Lounge).

The Carbis Bay Hotel continued as a traditional family-oriented establishment – back in 1966, it was offering full board for £2.40 a night – until the present owners took it over in the 1980s with big plans to expand.

Since then, the seafront garden has been replaced with a glass-fronted complex of suites cosily described as ‘lodges’, although ‘car showroom’ might be a more accurate description. At £6,000-a-night (including hot tub) they are probably not aimed at the traditional bucket-and-spade market, though they should suit a world leader very nicely.

Since being awarded the summit back in January, the hotel has become a building site and is frantically squeezing a few more buildings on its remaining patch of cliff, much to the fury of local residents. A clump of trees have been chopped down to make way for a new block which has no planning permission. 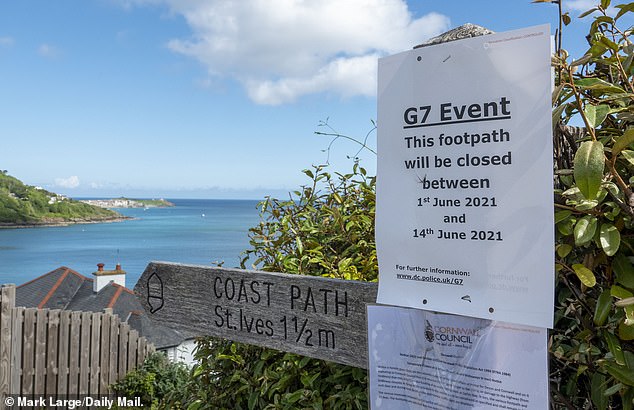 The Cabinet Office is procuring all things Cornish for the G7, commissioning a new set of summit tables from a local carpenter and locally-printed cards for the leaders to send home

The management – who like to brand this as an ‘eco-hotel’ – have claimed that these are important extra meeting rooms. However, the Cabinet Office, which is organising the summit, tells me that it did not ask for the extra buildings and doesn’t need or want them.

These unsightly new structures are clearly destined to accommodate much more than ‘meetings’, too. Yesterday, I saw fifteen shiny new lavatory bowls waiting to be installed. At least the toilet-mad Silvanus Trevail would approve.

Boris Johnson has insisted that this G7 summit is about building ‘a greener, more prosperous future’. While the ‘green’ bit may now be looking a bit flimsy, the prosperity seems to be flooding back here, long before the suits start turning up for next week’s summit.

In recent months, St Ives has been bursting at the seams. Covid has, of course, hit some people very hard but a large chunk of the country has been sitting on a lot of disposable income for a year and is determined to have a holiday. The last few days – half-term week for much of Britain – has seen local takings go off the scale.

When I tried to book a St Ives hotel room online this week, the nearest bed was more than twenty miles away and most options were not even in Cornwall. 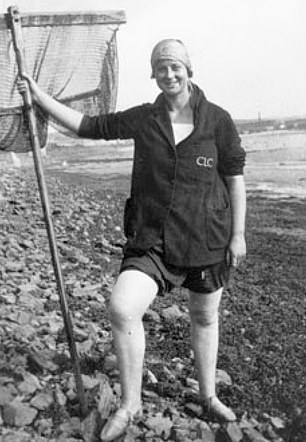 Near the café, I find a possible explanation for Boris Johnson’s choice of summit location. During the Second World War, while his grandfather was in the RAF, his grandmother, Irene Williams, lived in Carbis Bay with her parents at their holiday house, Trevose View

After ringing round town, I found one spare hotel room so small that the bathroom door crashed in to the bed and the only view was over the main road to the rear. Price: £266 a night.

St Ives has excellent restaurants to suit most budgets but don’t expect to walk in. You need to reserve well in advance.

Local businesses say that the main problem round here is finding staff.

She says it’s not all down to Brexit.

‘There are some young staff who were on furlough, have money in the bank and now they don’t want to come back,’ she says.

‘They’ve had time off, it’s hard work and they want to do something else.’ Like most local businesses, Helen accepts that the summit is going to cause problems next week.

‘But it will be short-term disruption in return for long-term gain,’ she says.

Independent town and county councillor, Andrew Mitchell, agrees: ‘It is going to lift the whole profile of Cornwall.

‘The world will see that we are a place to do business as well as have a holiday.’ The one section of the business community who are furious about the summit are those in the village of Carbis Bay itself.

‘We need every booking we can get after the year we’ve had but next weekend we’ve just got one reservation for two because people can’t get here,’ says Paula Richards, of The Bean Café. Her vegetarian restaurant has a devoted following but it sits on the road between the Carbis Bay Hotel and the rather grander clifftop Tregenna Castle Resort where the presidential entourages will be staying. 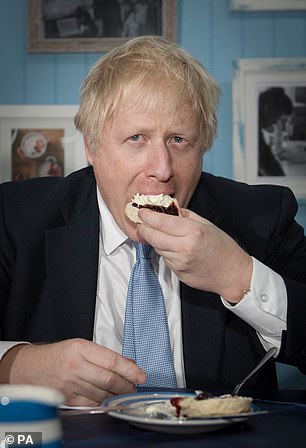 Boris Johnson has insisted that this G7 summit is about building ‘a greener, more prosperous future’. The PM is seen enjoying a cream tea in Cornwall in November 2019

Both hotels and the area in between them will be fenced behind a temporary iron curtain with no one allowed in or out except local residents.

What irks Paula is that all the local B&B beds have been taken by the police yet the cops won’t be eating local food.

They’ll get free scoff from the pop-up Tesco in a local field. ‘Still, at least no one is going to get burgled next week,’ she jokes.

Near the café, I find a possible explanation for Boris Johnson’s choice of summit location. During the Second World War, while his grandfather was in the RAF, his grandmother, Irene Williams, lived in Carbis Bay with her parents at their holiday house, Trevose View.

The PM’s father, Stanley, was born in the local hospital and often speaks of happy childhood memories of paddling around in Carbis Bay. I go in search of Trevose View and find it has been modernised and split in to two holiday homes.

One of them has been renamed ‘Tryst’. Very Johnsonian.

Though it is odd that the PM appears to have omitted Cornwall’s most famous exports from the summit programme.

The Cabinet Office is procuring all things Cornish for the G7, commissioning a new set of summit tables from a local carpenter and locally-printed cards for the leaders to send home.

The new Mrs Johnson and the other G7 spouses will receive hand-woven ‘Atlantic’ blankets from Perranporth. All very modern and worthy, no doubt, but there is, as yet, no mention of clotted cream or the great Cornish pasty.

At least some things never change. Beyond the carbuncles and security fencing at the Carbis Bay Hotel, the beach is a delight.

I find Lily Slater digging away in the sand with her parents, Jude and Nick. Both key workers (she in occupational health, he in supermarkets), they have worked all through the pandemic. ‘We just needed a holiday and how can you beat a place like this?’ says Jude.

Nearby, the Laws and Hickey families, both from North Lincolnshire, say the same. ‘If it wasn’t for Covid, we might have gone abroad,’ says Jane Laws.

‘But how nice is this? I just wonder if they’ll get much work done at the summit.’

It may be the first time the G7 has met in two years and they certainly will have much to sort out in a weekend. But having dragged the leaders of the free world all the way to his family’s old holiday stomping ground, the least Boris Johnson can do is serve them all a scone.