A dedicated royal blogger has revealed how the Duke and Duchess of Sussex sent her a thank you note, after she made a charitable donation to mark the birth of their son, Archie.

Gertrude Daly from Plymouth, Michigan, made a donation to The Rainforest Alliance in celebration of Archie Harrison Mountbatten-Windsor who was born on 6th May 2019, and received a letter expressing the couple’s ‘warmest thanks and best wishes’.

Posting on Instagram, the blogger who has documented the royals for the past five years, praised Harry and Meghan for their ‘lovely’ reply, and linked to a post sharing further thoughts on their response. 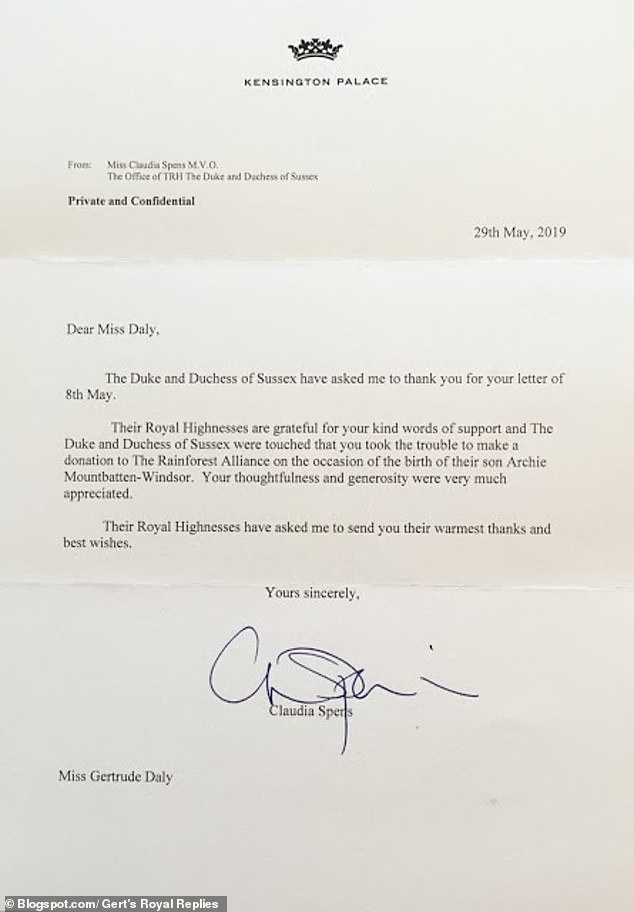 Royal blogger Gertrude Daly, from Michigan, shared a letter written on behalf of the Duke and Duchess of Sussex on her Instagram feed

Head of General Correspondence, Claudia Spens wrote: ‘Their Royal Highnesses are grateful for your kind words of support and The Duke and Duchess of Sussex were touched that you took the trouble to make a donation to The Rainforest Alliance on the occasion of the birth of their son Archie Mountbatten-Windsor.

‘Your thoughtfulness and generosity were very much appreciated.

The blogger who began Gert’s Royal Replies’ after sending her first letter to in 2014 for Prince George’s first birthday admitted she was disappointed not to receive a card with a photo of Archie on it. 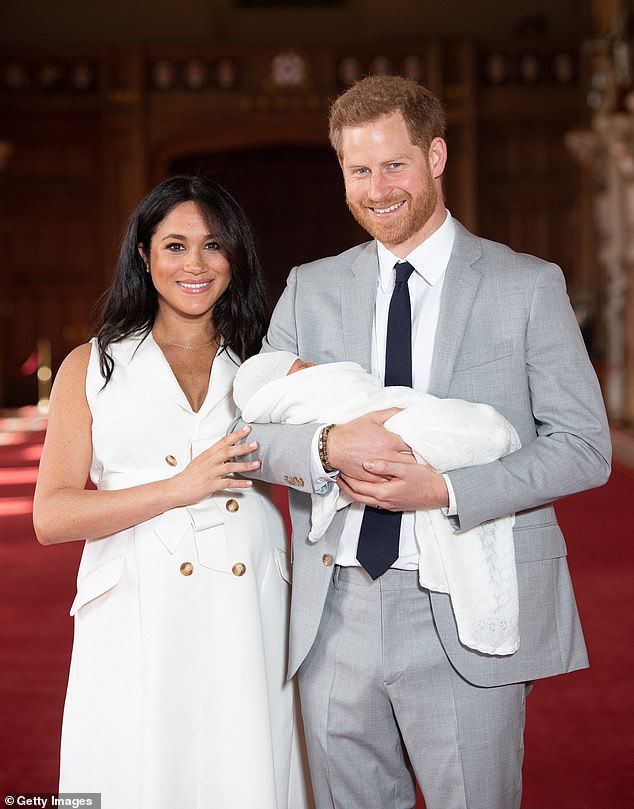 She added that her letter to the Duke and Duchess had detailed why she specifically chose to donate to The Rainforest Alliance, along with a fact sheet on the organisation’s work.

The royal blogger who boasts over 4,000 followers on Instagram received a stream of responses from others agreeing that Gertrude should’ve received a card.

One person said: ‘Beautiful reply! How come they didn’t send a card with it?’

Another wrote: ‘Wow, But why didn’t they send a card??’

A third added: ‘I sent two cards in April and got no reply, aren’t you lucky!’

The blogger who boasts over 4,000 followers on Instagram received a number of comments from others who were surprised she didn’t receive a photo of Archie

Archie Harrison Mountbatten-Windsor made his first public appearance during a photocall at Windsor Castle on 8th May 2019.

The Duke and Duchess of Sussex posed for a series of heartwarming photos inside St George’s Hall.

New mum Meghan, was not seen after the monumental occasion until Trooping The Colour, four weeks later.

Royal fans were left disappointed when the new parents chose not to bring their first born to the event which honours the Queen’s birthday.