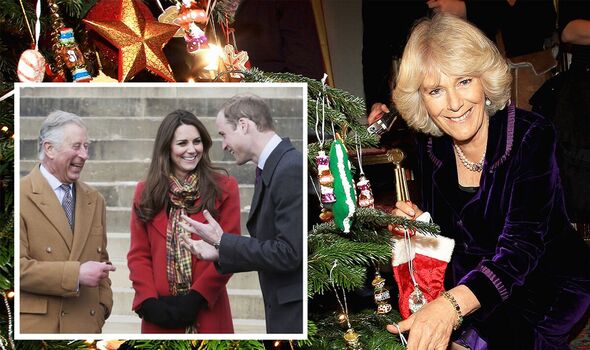 Members of the Royal Family exchange Christmas presents on Christmas Eve in a nod to their German ancestry tradition. And since they are royals, they have most items of luxury, so they prefer to gift one another novelty presents instead. Over the years, the royals have unwrapped all sorts of household items and jokes – from toilet seats to singing toy hamsters.

“If you can achieve something that is tongue in cheek and will have the Queen laughing, then you’ve really done well that Christmas. The more kitsch, the better,” she explained. “Nothing ostentatious, or terribly expensive or lavish, that doesn’t really go down well with the Queen.”

According to Hello!, when Meghan joined the Royal Family for Christmas in 2017, she gifted Prince William with a spoon, that had the words “cereal killer” engraved into it.

As for what Meghan gave the Queen that year, The Daily Star said she presented Her Majesty with a singing toy hamster. An unnamed source explained: “Meghan bought a little hamster that sings with a little rope for Her Majesty.

“It was so funny, especially when the corgis tried to take hold of the toy. She laughed and said ‘they can keep my dogs company!’”

Prince Harry has gifted some incredible novelty presents over the years, and one that really amused his grandmother was a Big Mouth Billy Bass toy, which she is said to have loved so much she put it on display in Balmoral, where it made her laugh.

The Queen’s other grandson, Prince William is said to have bought her a pair of slippers one year that were personalised with her face on.

The Queen was reportedly the hardest person to buy for as Kate, Princess of Wales previously mentioned in a documentary to mark the late monarch’s 90th birthday.

She explained: “I can remember being at Sandringham, for the first time, at Christmas. And I was worried what to give the Queen as her Christmas present. I was thinking, ‘Gosh, what should I give her?’

“I thought back to what I would give my own grandparents. And I thought, ‘I’ll make her something,’ which could have gone horribly wrong. But I decided to make my granny’s recipe for chutney.

“I was slightly worried about it, but I noticed the next day that it was on the table.

“I think such a simple gesture went such a long way for me and I’ve noticed since she’s done that on lots of occasions and I think it just shows her thoughtfulness, really, and her care in looking after everybody,” Kate added.

Former royal press secretary Dickie Arbiter gave context on why this gift was appropriate for Charles.

He said: “What is it we used to call the loo? We would call it the throne. You go and sit on the throne.

“So buying a leather-bound loo seat was really Princess Anne’s way of saying, ‘Here you are, you’ve got your own personal throne’.”

In 2018, a rumour started that Charles opts to carry his own toilet seat with him when he travels.

The royal biographer described a list of items the King and Queen Consort Camilla like to take with them everywhere they go: “His staff had also made sure to pack a small radio, Charles’ own lavatory seat, rolls of Kleenex Premium Comfort lavatory paper, Laphroaig whiskey and bottled water for both bedrooms plus two landscapes of the Scottish Highlands.”

According to The Mirror, the then-Duke and Duchess of Cornwall both strongly denied Tom Bower’s claims.

The Princess Royal is also said to have wrapped a pepper mill with a light on the end for Prince Philip, so he could season his food during barbeques once it became dark.

One year, Princess Diana was unaware of the ‘cheap and cheerful’ present rule, and on her first Christmas at Sandringham as a newlywed in 1981, she gave a luxurious cashmere sweater to Princess Anne who in return, handed over a loo-roll holder.