‘Fuming’ Sarah Beeny’s New Country Life viewers branded the presenter ‘cruel’ for keeping a wild rabbit as a pet and scaring wildlife by setting off fireworks near an animal farm.

Last night’s episode of Channel 4 show followed the property expert, 48, her husband Graham Swift and their family after they relocated from London to Somerset, and continued renovating a semi-derelict former dairy farm into their dream family home.

However, a few scenes left those who tuned in less than impressed – and many were quick to take to Twitter to express their views.

‘Absolutely disgusted by #SarahBeenyNewLife keeping a wild rabbit as a pet. Should’ve got help from a wildlife rescue. Fuming,’ wrote one, while a second penned: ‘Fireworks and wildlife, farm animals, pets????????? A big NO !!!!!!’

The criticism comes after furious locals slammed Sarah Beeny’s development plans for her new home saying it would cause more road accidents on an already dangerous bend. 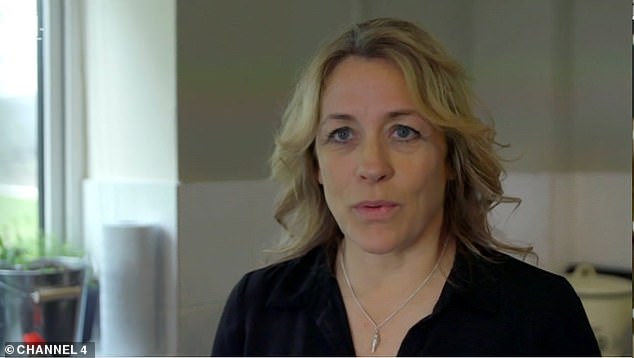 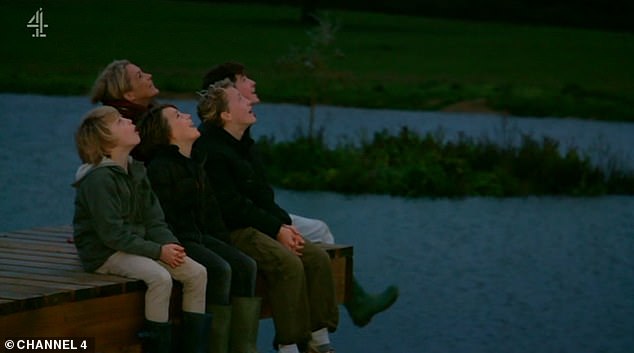 Following last night’s episode of the Channel 4 show, the presenter was criticised for scaring wildlife by setting off a firework display near the woods. Pictured, with her family

‘Fuming’ viewers took to Twitter, with one writing: ‘Absolutely disgusted by Sarah Beeny New Life keeping a wild rabbit as a pet (pictured)

During the episode, the broadcaster’s children Raffey and Laurie attempted to bring in some extra cash for the farm by suggesting a petting zoo for the public in one of the fields.

And when Sarah asked the kids what animals they’d like, they replied: ‘I think we should have a couple of tigers, and a bat. Polar bears, a sloth or a koala, and lions. Like Longleat.’

While Sarah admitted the idea sounded ‘amazing,’ she added it wasn’t going to happen.

But while the boys wanted exotic animals in the zoo, the narrator went on to say they’ll have to make do with a ‘rabbit the cat brought in’ – and it didn’t go down well with viewers. 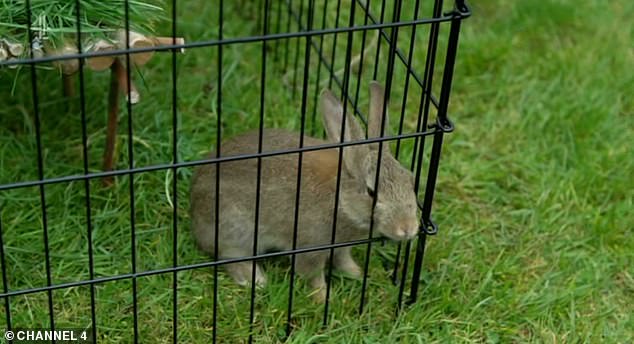 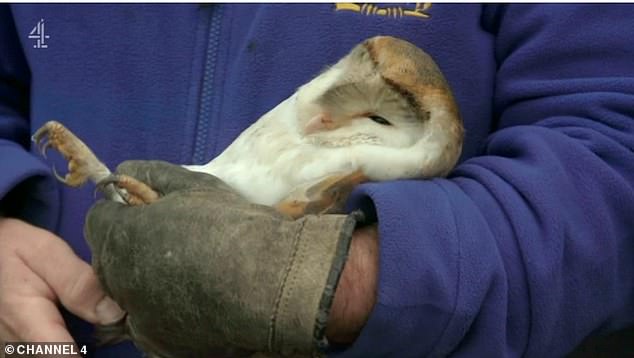 The family visited a rescue centre to look at birds of prey (pictured), before putting up a bird box in their field to encourage wildlife

‘Release that rabbit to its natural habitat, keeping it in a cage in the kitchen is downright cruel. Have you no regard for wildlife?’ urged one, while a second agreed: ‘That poor rabbit’s bid for freedom was foiled I’m sure it would be happier free.’

Later in the programme, the family visited a rescue centre to look at birds of prey, before putting up a bird box in their field to encourage wildlife.

However, shortly after, they could be seen tucking into toffee apples and watching their own firework display near the woodland.

‘Goes from bad to worse to TERRIBLE! Fireworks in the countryside? You must be mad. Where’s the dog? Did anybody warn the neighbours? Indeed, where are they – shunning you perchance? Oh and add a campsite and event company…’ wrote one.

A second commented: ‘Disappointed with the fireworks. Sorry but what about all the wildlife that you seem to love? They would have not enjoyed it. Love you all, love the programme but please ditch the fireworks idea … please.’

Meanwhile, a third added: ‘Let’s put up a owl box to encourage barn owls. Let’s set off fireworks to frighten them all away!’ 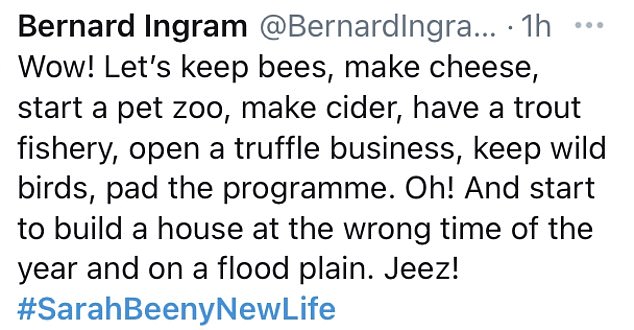 Taking to social media, one person penned: ‘Disappointed with the fireworks. Sorry but what about all the wildlife that you seem to love?’ (pictured)

Another instead took issue with the concept of the programme during such a difficult financial time and wrote: ‘They seem like a lovely family, but whose idea was it to screen #SarahBeenyNewLife – or “Fun Ways to Splash our Cash in the Country” – at a time of huge job losses brought on by #Covid?’

Sarah and husband Graham intended to build the home of their dreams on the 220 acres of land and make it a home for their four sons Billy, 15, Charlie, 13, Raffy, 10, and Lawrie, nine.

But the project was initally struck by a series of objections by locals. One neighbour labelled her original development plans ‘irresponsible and downright dangerous’ while another said they were ‘extremely foolish’.

Sarah and her husband Graham were eventually granted permission for their dream house.

Documents show objections to the development focused on a track leading from the property to a nearby road associated with accidents and poor traffic.

Her development on the edge of Bruton has been subject to an arduous planning permission process. 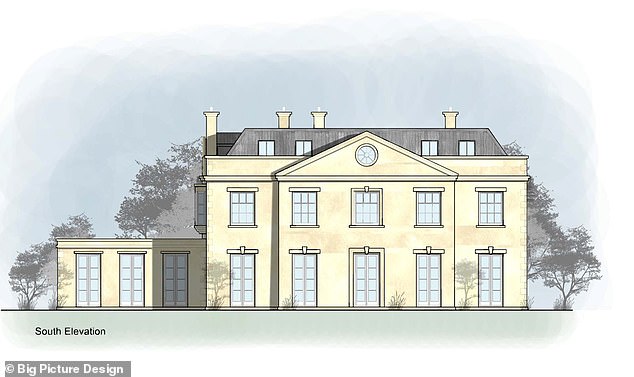 Plans for Sarah Beeny’s new home were met with objections from local residents. Pictured: Drawings submitted as part of the planning application for the Somerset property 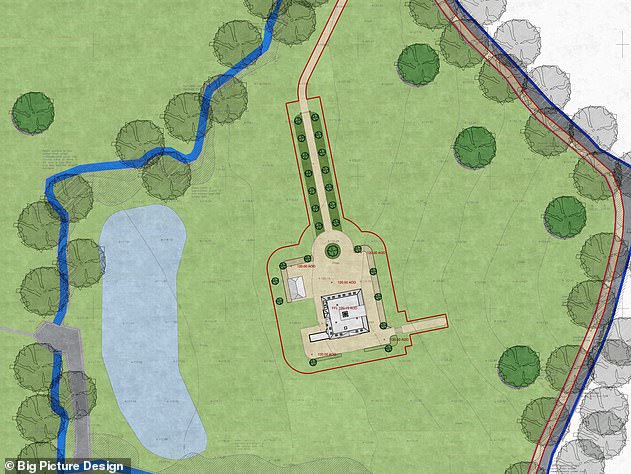 Eight out of nine comments objected to the original application back in the summer of 2019.

Wincanton resident Paul Williams said: ‘Having lived here for 35 years and in that time seem dozens of accidents on this notorious stretch of road, several of which have been through my hedge.

‘The idea of adding a further entrance/exit in this zone seems irresponsible and downright dangerous.

‘I fully support the Parish Council’s view that in the interest of public safety this proposal must be rejected.’

Sandra Pentecost added how locals have spent days and nights ‘slowing and directing traffic on a blind bend to avoid further collisions.’

She added: ‘I think it would be extremely foolish to allow any further vehicular access onto this road, particularly as the proposed dwelling has a well maintained and safe access from Barrow Water Lane.

‘The tracks that the applicants are claiming to be existing access points are in fact not and never have been for vehicular use.

‘I urge the planners to turn down the Application for this access point on to a dangerous and fast road.’

William Heath, who live in a cottage a few hundred metres from the property said: ‘We have lived at Dairy Cottage for circa 4 years.

‘During that time we have seen at least 23 road traffic incidents on the stretch of road between Trendle lane and the Stoker Hill junction.’ 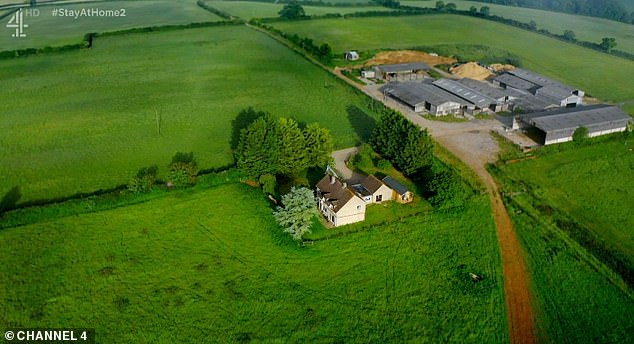 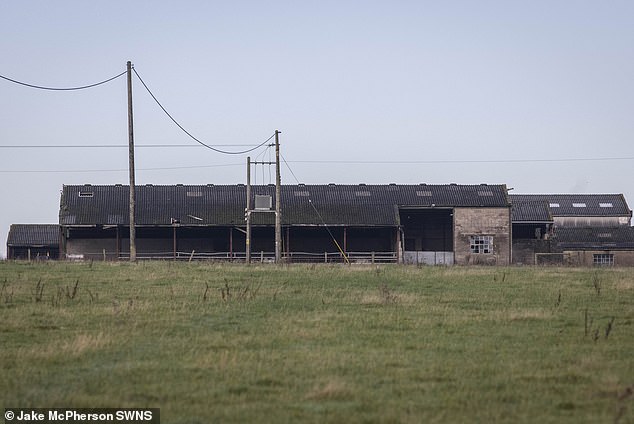 Eight out of nine comments objected to the original application back in the summer of 2019. Pictured: The land where Sarah hopes to build the home in Somerset

Official data shows a lower number of incidents than Mr Heath suggests, but he argued not all traffic incidents are reported to the local authorities.

He said: ‘The proposed access point has, in fact, been the scene of a number of accidents in the last ten years due to vehicles increasing their speeds as they enter this particular stretch of road.

‘One of the fields belonging to Home Farm is directly opposite the proposed access point and it contains livestock all year round.

‘One of the significant concerns is the danger posed by increasing the potential for accidents at this point that could lead to vehicles damaging the hedging, fencing and livestock.’

Objections also came towards plans to remove a small number of hedgerows to provide access to the property.

Wincanton resident Debbie Hicks said: ‘This hedgerow plays a key role in the wildlife connectivity between Moorwood and the River Pitt corridor for a number of species.’

Another neighbour argued the trimming of any hedges would be disturbing ‘nesting birds’ and therefore breaking regulations laid out by various wildlife acts.

Documents show a planning application was submitted in April 2019 and finally approved in July this year.

The Channel 4 show was met with a backlash after previous episodes when Sarah was criticised of ‘painful citysplaining’.

Sarah called the property ‘Little House on the Prairie’ as the couple began changing the land around their would-be home, including planting 1,000 trees to create a ‘woodland walk’ near the stream.

One viewer posted online: ‘Er this lot already have a big farmhouse to live in, am I missing something?’

One commented: ‘Watched expecting the warm fuzzy feeling. Instead, I feel I have been ‘citysplained’ as to how to correctly live rurally by rich town folk who can’t grasp council apprehension to the construction of a garish mansion being built in the beautiful countryside.’