Day in and day out, Sarah Hopkins has witnessed first hand how the court system fails children. Young people represented by the criminal lawyer frequently reappeared in adult court on more serious charges, stuck on a trajectory often accepted as inevitable.

"The reality is the resources are in the wrong places," Hopkins, who is a managing solicitor at the Aboriginal Legal Service, said.

"What is always available, what is always there, is prison as an alternative and sometimes it is the only alternative because there are not available residential rehabilitation programs or mental health services that can properly meet the needs of these kids." 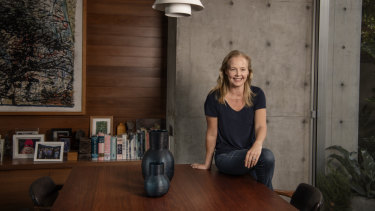 In her dystopian fourth novel, The Subjects, Hopkins imagines a world where there is an alternative.

After pleading guilty to dealing drugs, the smart and frank Daniel, 16, is whisked away to a mysterious purpose-built facility to participate in, he is told, a "residential program to address the issues underlying your behaviour".

I thought I would go to a darker place with this book but I found myself drawn to exploring what is possible.

The facility is light filled and airy, "full of future promise". The 12 children who live there negotiate behavioural contracts with the program's leader, they are allowed to roam freely, they can sleep in class – and there is even scented moisturiser in their individual ensuites. But they are being watched, recorded, analysed and judged. Are they, "students, patients, prisoners, guinea-pigs; or all or none of the above?"

In the novel, Daniel's reflection on his seven months at the facility are intersected with transcripts from an inquiry taking place a decade later.

While The Subjects delves into the systemic failures to support juvenile offenders, Hopkins' novel also raises the question: what if we got it right?

"I thought I would go to a darker place with this book but I found myself drawn to exploring what is possible. While there is certainly a dystopian element to it, a strong dystopian element, there is also for me very much a utopian one," Hopkins said. 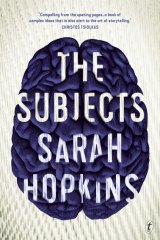 Hopkins, whose debut The Crimes of Billy Fish was shortlisted for the Commonwealth Writers’ Prize, conducted extensive research into psychiatry, neuroscience and psychology.

The novel is deeply interested in the medicalisation of children who display bad behaviour. Starting from the age of 11, Daniel has been diagnosed with PTSD, oppositional defiance disorder and ADHD. "I can tell you now: you don't have any disorder," the enigmatic Dr J tells him in a session at the facility.

Hopkins, who lives in Coogee with her two teenage children and is married to celebrity chef and restaurateur Matt Moran, said too often the individual stories of child offenders – the impetus for their behaviours – are overlooked with the application of simplistic diagnostic labels.

"We tick boxes and close files without ever really understanding what is going on in that person’s life and it leads to really tragic outcomes."

The desire to explore broader structural ways to support children has led Hopkins to extend her reach beyond the courtroom.

Hopkins is the chair of Reinvest NSW, a non-profit organisation that advocates shifting resources into community-led, data-based initiatives that target early prevention, intervention and diversion from the prison system for children.

She is overseeing a pilot project in Bourke, which has shown early significant reductions in youth offending and domestic violence, as well as improvements in education engagement

It's a role that helps Hopkins to maintain optimism in life and in her writing, day in and day out.