SARAH VINE: Help! My home has been hit by a teenbomb just like Nicky Campbell’s

TV presenter Nicky Campbell brought us all a little light relief this week when, in a fit of frustration, he ‘room-shamed’ his teenage daughter on Twitter by posting a snap of her clothes and make-up-strewn floor.

‘This is completely unacceptable,’ he captioned it. ‘You are nearly 19 years old and I am bloody sick of it. I don’t care that you were going to tidy it up. It just really p***** me off.’

He has since claimed it was all part of an elaborate internet joke . . . though it looked real enough to me. After all, what parent hasn’t been there?

You go into your child’s room only to discover that it appears to have been ransacked by burglars. Strange . . . the thieves don’t seem to have touched anything else? The TV’s still there, as is the hi-fi and the cat. It leaves only one possible explanation: teenbomb. 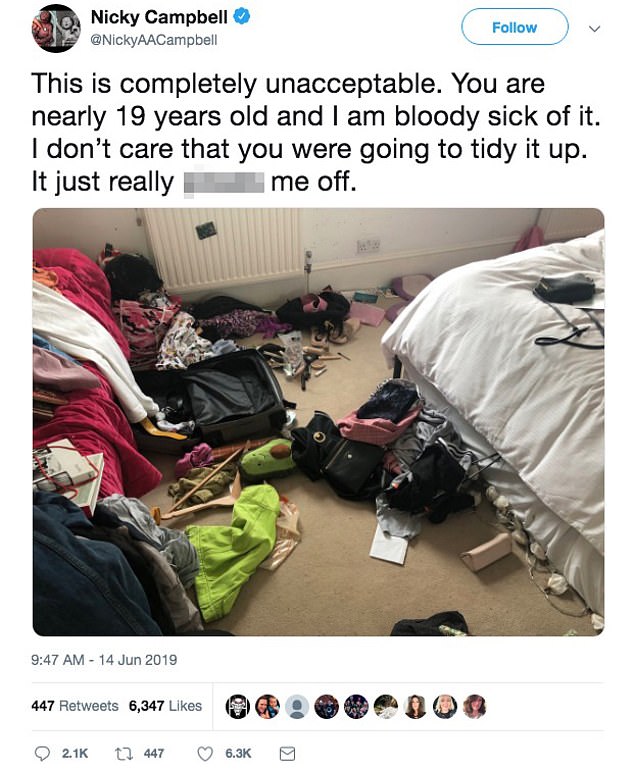 Pictured: The tweet from Nicky Campbell that sparked criticism online, with social media users accusing him of a ‘very unfair’ power imbalance

What is it about the teenage brain that simply cannot seem to process the concept of putting things away? A brain that is apparently pathologically incapable of hanging up a towel, turning out a light or putting a plate in a dishwasher?

My mother, who knows everything and is wise, says it’s because their frontal cortex — aka the seat of higher cognitive functions in the brain such as emotional expression, problem-solving, judgment and the ability to replace the top on the toothpaste — is not yet fully developed.

They are instead disproportionately governed by the reptilian brain which, judging by the state of Ms Campbell’s room (and those of my own dear teenagers’) is perfectly content to sleep in a bed of its own dirty pants and half-eaten pizza.

The only comfort is we are not alone: Campbell’s post prompted a flurry of pictures from similarly frustrated parents, many of the opinion that, compared to their offspring, Ms Campbell was a veritable model of domestic virtue.

Indeed, the whole incident seems to have struck a chord with the nation’s long-suffering mothers and fathers, many of whom gleefully detailed tales of two-week-old scrambled eggs and fermenting cereals festering inside drawers, posting endless snaps of piles of detritus recovered from beneath beds and behind chests of drawers.

Others weren’t so charitable, accusing Campbell of the modern equivalent of putting her in the stocks. Even Labour MP Helen Goodman weighed in, writing: ‘Really very, very unfair use of power imbalance. Most inappropriate.’ Who says Lefties have no sense of humour, hey? 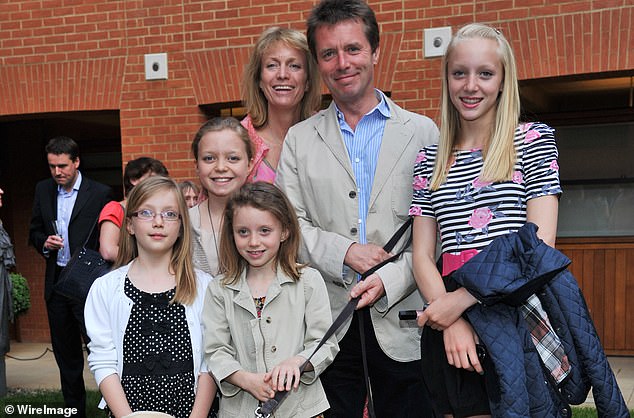 Nicky Campbell admonished daughter Breagha (far-right, pictured in 2011) in a post on Twitter in which he said her messy room ‘really p*****’ him off

So if, for example, I write that one of my children (I won’t say which one, but it’s not my son) managed to attract a small colony of mice to her bedroom, such was the level of rotting comestibles secreted in her room, I might find myself in very hot water indeed.

Personally, then, I’m rather grateful to Campbell for reminding me that I’m not alone in my parental plights. Not that it is a peculiarly modern problem.

As a teenager I once left a ham sandwich under the bed for about a month — in Italy, in summer. After that my mother adopted a simple but effective policy of sweeping away anything she found on the floor into a black bin liner, until eventually my bedroom was as spartan as a nun’s. The only way I could get any of it back was by doing chores.

I quickly learned to put things away.

But perhaps the best solution to sloppy teenage behaviour she ever devised was when my brother was 16.

Having recently acquired a girlfriend, he was more than usually confined to his bedroom. That Christmas, I remember, after the whole family exchanged presents, she brought out one beautifully wrapped box and gave it to him.

We were all on tenterhooks as he opened it, expecting some rare wonder. Inside, in tissue paper, was a very small, very padded, very pink bra she’d found amid the detritus under his bed.

His room was immaculate ever after.

I’m always delighted to see pictures of small royals. In fact, I love the shots that the Duke and Duchess of Cambridge periodically release of their brood, many of which are taken by Kate.

But while the Cambridge family album looks fundamentally like any other (albeit slightly better laundered), the Sussexes have decided to pursue a weirdly naff Clintons card aesthetic when it comes to theirs. I’m sorry, but the picture they released of baby Archie on Father’s Day was a catalogue of cliches. The arty sepia tones, the tiny fist clutching his father’s finger, the glint of the wedding ring.

It’s a baby, for heaven’s sake, not an advertising campaign. This is pure Instagram influencer pretentiousness. 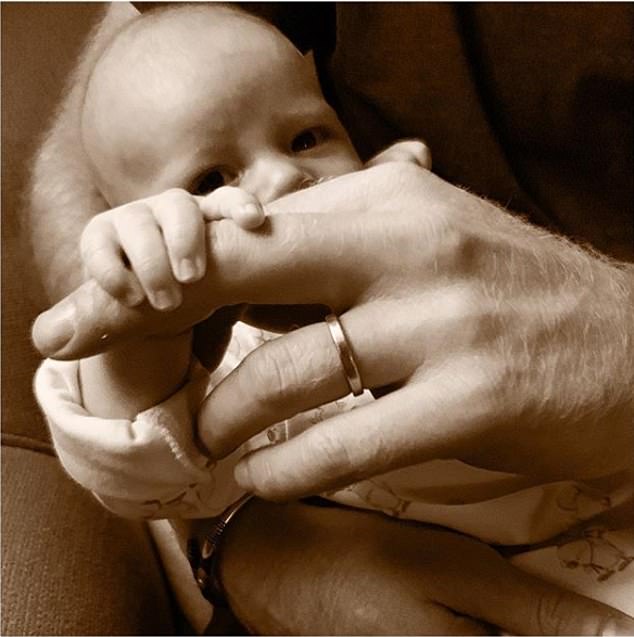 Prince Harry and Meghan posted an adorable photograph of Archie, six-weeks-old, in a touching tribute on Father’s Day (pictured)

The worst part is the coyness of it: we don’t really get to see Archie, more an idea of him. It’s an image designed to manipulate, not inform. And, like so much about Instagram and social media in general, it holds a false promise of intimacy when in reality it is little more than an act of vanity.

It also puts Harry and Meghan on a par with every other attention-grabbing celebrity whose success is measured by the numbers of followers and ‘likes’ they attract.

Call me old-fashioned, but royalty should be above such things.

How dismaying that ITV is to ban all-male writing teams in the pursuit of gender equality. Comedy writers should not be judged on gender, rather on whether they are funny. The same is true in other walks of life, from politics to business: what matters is ability, not whether you tick a box.

Which bikini is the cheekiest?

Mass internet outrage over the notion of an online fashion retailer selling a £1 bikini, as worn by a former Love Island contestant whose name no one can be bothered to remember.

Of course fast fashion is crass and exploitative and leads to increased pollution and landfill, all of which are distinctly sub-optimal.

But when, on closer examination, it transpires that said £1 bikini is almost identical in size and scope to the one promoted by Gwyneth Paltrow and priced via her website at £285, it’s hard to decide what’s most outrageous: selling it for £1 or charging a small fortune.

And while I’m on the subject, I only have a limited time on this planet, which is why I really cannot bring myself to follow Love Island.

I am, however, aware that someone in a bikini has been crying a lot, while someone else, also in a bikini, has been flirting in a predatory manner. For some reason, all this has prompted hundreds of complaints to Ofcom. But isn’t this the same format as every series — in which case why are people so up in arms about it? Perhaps pretending to be upset is simply their way of justifying their tawdry voyeurism.

I was astounded to read about the cyclist ordered to pay compensation to a woman he knocked down after she stepped onto a road without looking because she was too busy staring at her mobile phone. Especially since he had come through a green light and even sounded a bike-horn to warn her.

All road users must be alive to the possibility of carelessness — but surely we can’t also be held accountable for gross stupidity.

If you’ve ever wondered what kind of idiot spends thousands of pounds on so-called ‘sports-luxe’ fashion (aka overpriced tracksuits), now you have the answer: Madonna, seen here in the kind of ensemble not even a toddler would wear. Let’s hope that smile means she’s wearing it for a bet.

As someone who regularly finds herself staring into three sets of soulful brown eyes, especially at mealtimes, I must confess I feel slightly cheated to discover far from being an expression of undying love and loyalty, my dogs’ expressions are actually a cunning evolutionary strategy designed to trigger a nurturing response in humans. Next thing you know we’ll discover they’ve found a way to turn humans into their slaves without us even noticing. Oh, wait . . .

I can’t fathom why Rory Stewart’s opponents are targeting him on the basis that he won’t confirm or deny working for British intelligence in his 20s. Everyone is entitled to a misspent youth, and if Rory chose to spend his working in defence of his country, then who are we to question that decision?