Socialite Basia Briggs is so chummy with Princess Michael of Kent she held a launch party for one of the royal’s historical novels at her own home.

But all now does not appear to be well between the pair. For Basia has, I can disclose, taken the highly unprecedented step of making a public statement about her financial support for the Princess, who is famous for her assertiveness.

Marie Christine, the wife of the Queen’s cousin, Prince Michael of Kent, shared on her official Instagram a photo from the party held at the home of Basia and her husband Richard.

Next to it, the caption read: ‘HRH Princess Michael of Kent last night treating guests to a royal insight into her latest novel.’ 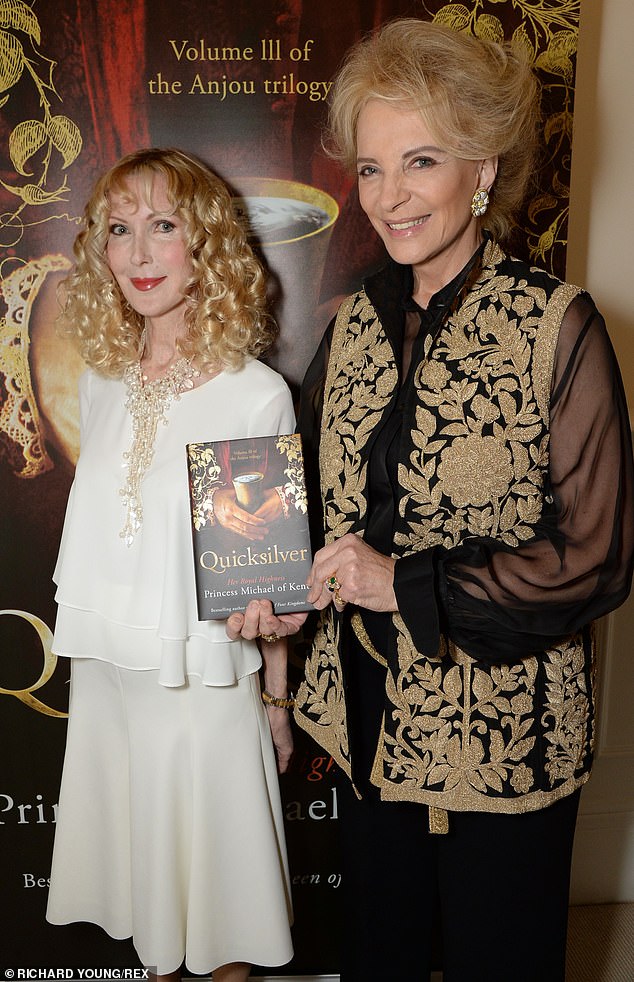 But, in an extraordinary move, Basia, who has never publicly discussed her friendship with the couple, has written underneath: ‘Paid for by Mr and Mrs Richard Briggs at their Chelsea home.’

What makes Basia’s comment all the more remarkable is that she has only just posted it — even though the party was held back in 2015.

When I contacted Basia, she declined to elaborate on her financial relations with Princess Michael, so we can only speculate about what prompted her to make the remark.

Basia became a fixture on London’s social scene as the owner of Hyde Park Stables, from where famous figures such as Madonna and Donald Trump would go riding. She and Richard sold the stables earlier this year.

Her friendship with Marie Christine blossomed through Basia’s work as the co-ordinator of the appeal in the Nineties to pay for the Queen Elizabeth Gate in Hyde Park in honour of the Queen Mother. Prince Michael was patron of the appeal.

He attended the 2015 party at Basia’s home along with his son, Lord Freddie Windsor. Their daughter, Lady Gabriella, has also been a guest at her soirees.

Triple Oscar-winner Meryl Streep, who has been married to sculptor Don Gummer for more than 40 years, still marvels at the unfairness of her artist mother, Mary, having to ask her dad, Harry, for money. The 69-year-old actress reveals: ‘I swore to myself that I would never have to ask a man for money.’ Little danger of that — Meryl’s said to be worth £35 million. 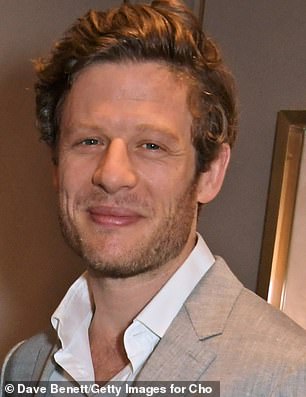 TV hunk James Norton has opened up about his close friendship with actress Emma Watson, his co-star in the forthcoming film adaptation of Little Women — in which they play husband and wife John Brooke and Meg March

TV hunk James Norton has opened up about his close friendship with actress Emma Watson, his co-star in the forthcoming film adaptation of Little Women — in which they play husband and wife John Brooke and Meg March.

‘We had our own little world of Meg and John. It was a lovely, warm, affectionate relationship, both on and off the camera, which was great,’ says Norton, pictured this week at a West End party.

The 33-year-old has a habit of falling for his female colleagues.

He dated Jessie Buckley after she played his sister in the BBC’s War & Peace in 2016, then fell for his current girlfriend, Imogen Poots, after they starred as lovers in the 2017 play Belleville.

Boris Johnson has yet to spell out where he stands on the controversy surrounding tech giant Huawei’s relationship with the communist regime in Beijing.

However, his businessman half-brother Max, 33, is cock-a-hoop at facilitating trade with China after helping Wonderbly, a British publishing and education technology firm, reach a ‘memorandum of understanding’ with China’s largest publisher, Phoenix Publishing and Media Group.

Aitken’s girl goes on hunt for a husband

Former It-girl Alexandra Aitken, who had an ill-fated marriage to a Sikh warrior, is on a mission to find another man.

The daughter of former Cabinet minister Jonathan Aitken has posted her quest on social media.

‘This year, I would like to meet a man or fall in love again with an eternal love, have babies and make house. Dates, date set-ups, girl advice and man musings welcome,’ she says.

Alexandra — one of Aitken’s twin daughters by his first wife, Lolicia — caused a stir when she renounced her Western way of life and moved to the Punjab nine years ago to wed Inderjot Singh, changing her name to Uttrang Kaur Khalsa.

However, their marriage hit the rocks soon after.

Evergreen singer Lulu has lots to shout about when it comes to being a doting grandmother.

She reveals that her son Jordan, daughter-in-law Alana and two grandchildren, Bella, nine, and seven-year-old Teddy, have all moved in with her in London.

‘I’m loving it,’ says Lulu, 70. ‘It came about because they’re moving out of London.

‘Jordan and Alana didn’t want to disrupt the children’s schooling, but it was too far for them to do the school run every day until the end of term.

‘So I came up with a plan. The school is near where I live, so I suggested they all stay with me.’

Sir Mick Jagger’s lover can tell you if blondes really have more fun. The 75-year-old lothario’s girlfriend, American ballerina Melanie Hamrick, has naturally dark hair — but, this week, she unveiled a dramatic new look comprising a head of golden curls. The 32-year-old mother of Mick’s eighth child, two-year-old Deveraux, posted online a snap of herself sporting a wig while rehearsing for her latest role — a new production of Manon, the tale of an ill-treated 18th-century convent girl, at the Metropolitan Opera House in New York. 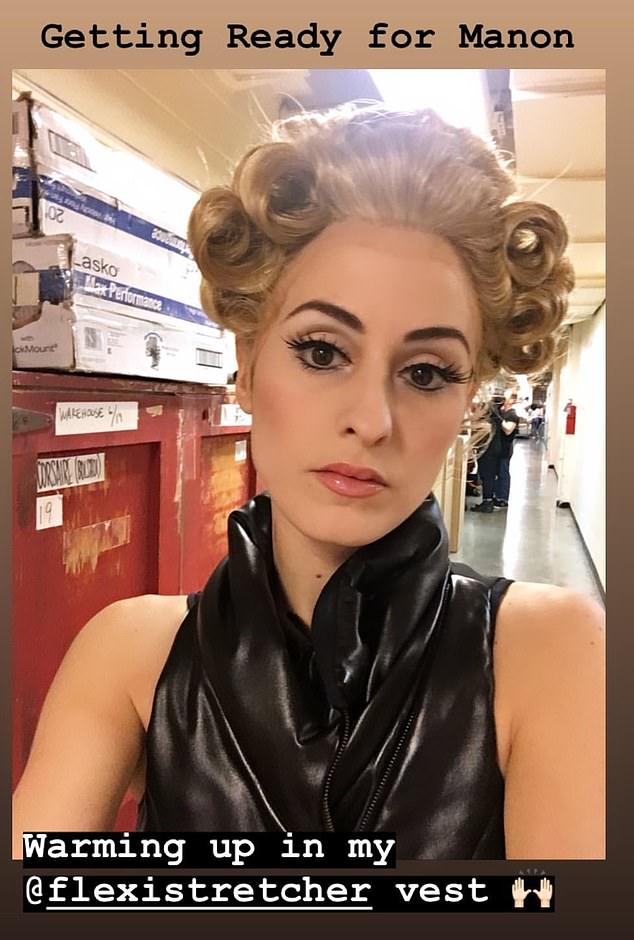 Fresh-faced television presenter Kate Garraway is toying with the idea of a full-blown transformation of her appearance.

The 52-year-old declares: ‘I have not ruled out having a full face and body lift. There may come a point when I want everything pulled up and back.’

Until then, Kate, who has two children with her former lobbyist husband Derek Draper, adds: ‘I think the best beauty treatment for me is getting enough sleep. I used to be able to do so much on two hours’ sleep and I just can’t any more.’

Rod’s Ruby has bags of fun!

Sir Rod Stewart’s daughter Ruby — the fourth of his eight children — has inherited his high spirits as well as his musical talent.

Celebrating her 32nd birthday at a five-star hotel in London this week, the spirited blonde singer, whose mother is Rod’s ex, U.S. former model Kelly Emberg, ended the night in her bathroom playfully crouching in a giant Celine shopping bag. She had spent the evening surrounded by what she described as ‘enough rosé to intoxicate an army’.

It comes after she said of her family: ‘I’ve heard people say that before you come to Earth, you choose which parents you have. I certainly think I chose mine.’ 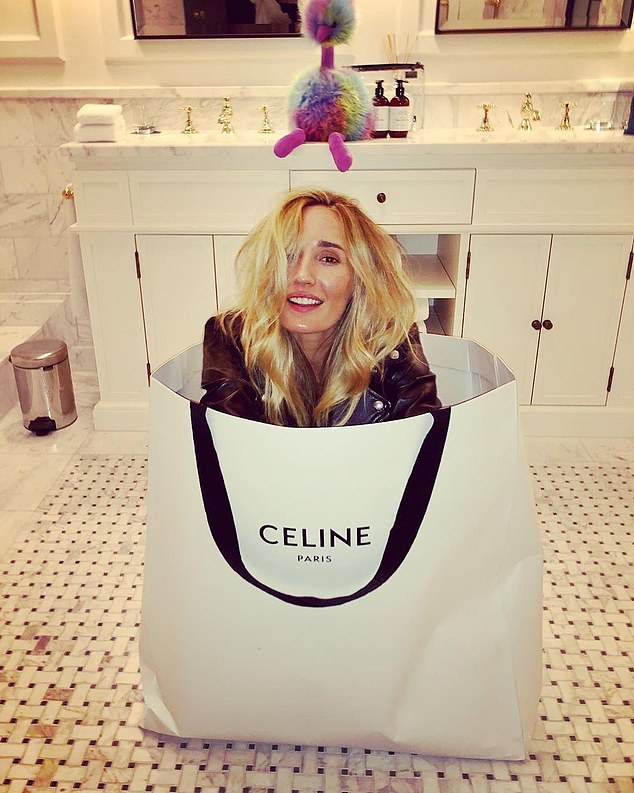