When Melbourne-based Sheldon Riley competes in Eurovision – Australia Decides on the Gold Coast in February, the stakes will be high: it’s not just the chance to win a ticket to Italy for the May music extravaganza but also to fulfil a childhood fantasy.

The 22-year-old singer-songwriter says Eurovision “has always been the end goal”. Thanks to his elaborate reality TV appearances and solid songwriting acumen, the dream is ever closer to being realised. 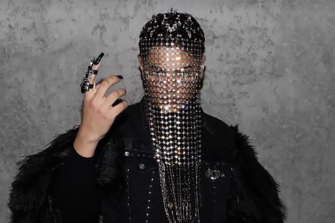 Singer/songwriter Sheldon Riley is ready for his Eurovision debut in 2022.Credit:

“In terms of fashion, and music-wise, I’ve always wanted to end up there,” he says. “Long story short, everything I do now is the dream I had when I was a kid … the whole journey of getting to where I am now has been really long. I’m still young, but it’s taken a lot of courage and a lot of bravery.”

Riley grew up in a strictly Christian family in western Sydney. As a child, he says, he spoke very little but wrote his thoughts relentlessly in a notebook. 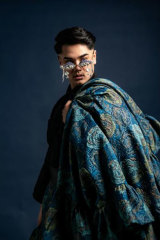 Riley will wear a bejewelled mask as part of his costume.Credit:

“I’m from a public housing family, so we moved around a lot. My family found a lot of comfort in the Christian church. I grew up in a very, very strict and strong Christian family. My mum comes from public housing her whole life and my dad was fresh from the Philippines, so they didn’t have much money. Religion was a safe fort for them.”

Less so for Riley, who knew he was gay from a young age. Until he came out to his family and friends, he was cripplingly quiet, self-conscious and insecure.

“I came out at a pretty young age, 13 or 14 … I kind of always knew. My mum and dad are very supportive … as much as they loved God, I was always their number one priority,” he says. “To me, coming out as gay wasn’t the hard part, it was coming out doing what I do now. The way I dress and the way I act, sing and speak was more scary to me than coming out as homosexual.”

None of that shyness has been evident in his performances on reality TV: The X Factor in 2016, The Voice, The Voice All Stars and as a quarter-finalist in America’s Got Talent in 2020.

For Eurovision he’s dialling the drama up to 007 on his self-penned Not the Same, a dark Bond movie-inspired orchestral pop number designed to shake the rafters and break hearts.

“It was actually never supposed to be a Eurovision song; it was more a reflection on me and how far I’ve come and what I’ve learnt about myself,” he says. “It’s reflective of not being the same as everybody else. Most Eurovision songs are very big, and they’re for everyone, but this one … you really get invited into a one-on-one conversation. It’s very personal.”

Not the Same has its roots in lyrics Riley wrote in 2015. For the past six years, he has revisited the song, tweaking it and performing it privately, then finally giving it a dramatic, glamorous makeover.

“It’s ridiculous,” Riley says. “The outfit is so insanely beautiful. It’s taken hours and hours and hours to make … it’s something I’ve wanted to wear for a very long time that I haven’t been able to do. It’s very dark, ethereal.”

“Not many people can walk onto stage, with thousands of people watching, in a complete crystal mask feeling comfortable and confident,” he says. “I wanted to live the fantasy in my head that I dreamt of for so long. Now I get to do it and I feel like a magical Disney character every time.

“I make the things that I wear, I write the songs that I sing. I feel like every day I get to play imagination like when I was a kid.”

Ultimate Guide to Eurovision is on SBS on February 26.